Evidence always plays an important role in the decision and conclusion of the case but sometimes, the decision and the conclusion of the case depend upon the types of evidence. Direct evidence is directly linked with the facts and the commission of an offence but the circumstantial evidence does not have direct link with the fact and the commission of the offence. It is generally based on the chain of the events which can be conclusively proved by the prosecution. So, in this case on the basis of circumstantial evidence, the District and High Court erroneously take his decision which was rectified by the Supreme Court. The Supreme Court discussed many points regarding circumstantial evidence and burden of proof. This was a leading judgement in the law of evidence. 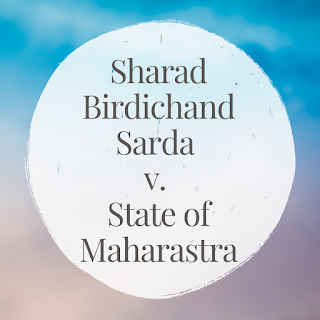 FACTS OF THE CASE

On 12th June 1982, in Takshila Apartment, the deceased (Manju) was found dead on her bed who was a chemist. Before 4 month on 11th February 1982, she was married with accused, Sharad. She wrote two letters to her sister (Anju) and one letter to her friend (Vahini), in which she wrote that she was unhappy with her marriage. Her in-laws and husband ill-treated her. She had more expectation to her in-laws and husband. She went to her mother’s home and after that her father-in-law called her for her sister-in-law marriage. She came to her marital house and attended the wedding. She returned home with Rameshwaram (Accused brother) and his wife Anushka and a child at 11 PM. They both lived in the same apartment but different flat.

· DISTRICT SESSION COURT- The prosecution filed case against the accused (sharad) and co-accused (Ramvilas, who lived in the same apartment and Rameshwaram). The prosecution alleged that they jointly made criminal conspiracy against the deceased and committed her murder. The co-accused charged with the Section 201 (causing disappearance of evidence of offence) and Section 120-B (Punishment for criminal conspiracy) under the Indian Evidence Act, 1872. The Session Court convicted sharad under Section 302 of the Indian Penal Code and granted 2 years rigorous punishment to co-accused on the ground of circumstantial evidence i.e. letters and post-mortem report which showed that the death caused by consuming poisonous (Potassium Cyanide) and the court declared the letter as dying declaration under Section 32(1) of the Indian Evidence Act.

· Burden of Proof: In the Criminal Justice of the India, evidence is to be proved before a court of law in order to prove guilt of the accused. As per Indian Evidence Act, 1872, there are some standards set that the evidence of the case will be proved substantially and the burden of proof lies on the prosecution.
· Circumstantial Evidence: In many cases, the evidence is not direct which creates difficulty to prove a case beyond reasonable doubt. In order to proof the case, the circumstantial evidence put along with the general evidence to strengthen the case. The chain of the circumstantial events put together like last appearance of a person, dying declaration or letters etc. The circumstantial evidence also established the probability of the chain of event and it should be highly-reliable.

In my opinion, this was a leading judgement on the significant role of the circumstantial evidence in the case of the conviction of the offence. In this case, there was no direct evidence prevail and also there was no eye-witness. So, on the basis of circumstantial evidence we cannot convict a person for any offence unless the evidence is highly reliable. The burden of proof lies on the prosecution and the benefit of doubt always given to the deceased. The opinion of the Supreme Court was right and the High Court and District Session Court made erroneous decision as per my view.