We live in a democratic country where everyone is entitled to fundamental rights. As per article 14 of the Indian Constitution, ““The State shall not deny to any person equality before the law or the equal protection of the laws within the territory of India.”[1] Though as per our constitution, the law remain the same for every person irrespective of his caste, creed, sex etc it seems that the majority of the society is yet to understand this. In the landmark case of Navtej Singh Johar Vs. Union of India, it was held that section 377 was unconstitutional as it criminalised consensual sex between adults of the same sex.[2] Section 377 was drafted by Thomas Macaulay in the year 1838 and it came into effect in the year 1860. The law was derived from the Buggery Act, 1533 [3]which referred to any unnatural sexual act against the wish of God or human. 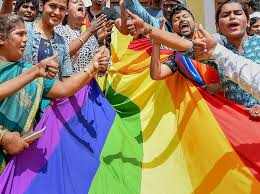 Ever since then, article 377 had been in force until the Judgement given by the Supreme Court to take down the article in the year 2018. The other provisions of the article remained in power and only the consensual sex between adults of the same gender was abolished. Section 377 was a matter of controversy for decades. The contentious section was first challenged in the court by NGO Naz Foundation and AIDS Bedhbhav Virodh Andolan in the year 2001 but both the petitions were dismissed by the court. It was a matter of relief for the people belonging to the LGBTQ community as the Delhi High Court decriminalised consensual sex between two adults of the same gender in the year 2009 as it was violating article 14, 15, 21 of the Indian Constitution. However, the sense of relief lasted with the LGBTQ community only for a few years as the apex court of the country declared the judgement of the Delhi High Court to be legally unsustainable and also rescinded the judgement made by the Delhi High Court. People had mixed reviews about the judgements which lead the country to plunge into a situation of ecstasy and agony.

It was the year 2014 which is termed to be a turning point for the LGBTQ community. The Supreme Court finally directed the government to recognize the LGBTQ community as a third gender and identified them under the OBC Quota. Earlier, the people belonging to the LGBTQ community were compelled to choose among the two genders mentioned in the constitution and were therefore deprived of the Right to Sexuality. After the declaration made by the Supreme Court, the transgenders and the people belonging to the LGBTQ community got their own recognition. After their first achievement, the LGBTQ community continued their journey to seek their rights and filed a petition in the Supreme Court challenging Section 377 of the Indian Penal Code. They stated in their petition that section 377 violated their Right to Sexuality, Right to Sexual Autonomy, right to choose their sexual partner, Right to Life, Right to Privacy, Right to Dignity and the Right to Equality which are granted to every citizen of the country under Part II of the Indian Constitution.[4] The year 2017 brought another victory to the people and the LGBTQ community especially as it observed the Right to Privacy as the fundamental right and also observed sexual orientation to be an essential attribute of privacy.[5] It was the year 2018 when the petition challenging Section 377 were heard by a five judge constitutional bench and it was finally decided by the Supreme Court that consensual sex between two adults of the same gender is legal. The Supreme court in the judgement also sought an apology to the LGBTQ community for the violation of their rights in society. It was a very clever decision of the apex court to refrain from taking down section 377 completely as it would allow people to indulge in activities relating to sexual activities with minors, non-consensual sexual activities and bestiality. The completely striking down of Section 377 would amount the country to land in a very precarious situation as the sexual crimes against the minors and animals would witness a gigantic increase in the country leading the country into a pernicious situation. Therefore, it is very vivid that the lawmakers have taken a very crucial and great decision by providing the LGBTQ communities with their identity and rights they deserve.