In today’s time when there is a sudden spike in the new wave of COVID-19, it can be foreseeable that this period can again be construed as a “force Majeure” event for all the commercial contracts due to a detrimental effect in the industries and could result in loses for the parties in a contract 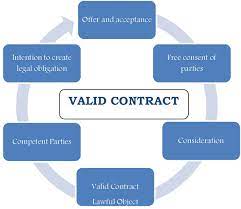 Seeing the sudden increase in COVID-related contracts all over the world, like awarding of the 19-billion-pound worth of contract by the UK to a vaccine company [1] or seeing the observation by many freelancers that there is a rise in the need for demand of contracts, which led to an increase in their daily income. It is showing the more-than-ever need to look at the basics of the contracts under the Indian contracts act 1872.

According to section 2 (h) of the Indian contracts act 1872 any agreement which is enforceable by law is called a contract.[2] Elaborating the above definition, a contract is a written or oral agreement between two parties who have the capacity to contract, that creates a legal obligation on each other to do or refrain to do something for a valid consideration.

Essentials of a valid contract:

The essentials for a valid consideration are as follows:

·       Offer: Offer is the first step that helps in the formation of the contract. According to section 2(A) of the Indian contracts act, 1872

“When one person signifies to another his willingness to do or to abstain from doing anything, to obtain the assent of that other to such act or abstinence, he is said to make a proposal”.[4]

Illustration: If person A who is a vegetable vendor offers to sell his 1 kg of onion to person B for 25 rupees, he is said to make an offer or proposal.

·       Acceptance: It is illustrated in section 2 (B) of the Indian contracts act, and tells that if the person to whom the offer is made, signifies his assent to the offer, he is said to accept it.[5] An acceptance should be definite and absolute and should be communicated to the offeror in a reasonable time to make it valid. There should not be any kind of counteroffer. Counteroffer overrules the existing offer. The best example to explain acceptance is the case of Hyde v. Wrench [6] where the court said “There was no contract because acceptance had not occurred. Where a counteroffer is made this destroys the original offer so that it is no longer open to the offeree to accept. Hence, the acceptance must be absolute and unconditional.”

Illustration: When person A i.e. the vegetable vendor offers person B to sell 1 kg onions for 25 rupees, person B should accept it without any condition like counter offering 22 rupees for the vegetable.

“A valuable Consideration in the perception of law may comprise either in certain Rights, Interest, Profit or Benefit accumulating to one gathering or some avoidance disservice, misfortune or duty given, suffered or attempted by the other”.[7]

Illustration: Suppose in the above example, if person B in place of 25 rupees promised to supply 25 grams of any illegal drug, then that consideration would not be legal and invalid in the court of law.

· Capacity to contract: The parties should be competent to contract and fulfil the requirements provided under section 14 of the Indian contract act 1982.[8]

The people who are coming in a contract should attain the age of majority i.e. 18 years and should be of sound mind to understand the contract. As given in the case of Mohri Bibi v. Dharmodas9 which said that a contract would be void-ab-inito if the concerned parties are minor.

Section 14 also specified that the contract will also be not enforceable if a party is disqualified under the law to make contracts.

·       Presence of free consent: The parties in the contract should enter by their own will. The consent should be following section 14 which says that free consent is consent that is not obtained by coercion, undue influence, fraud,​​ misrepresentation, and mistake.

Illustration: If person A i.e. the vegetable vendor threatens person B to buy the vegetables at 5 times their value or his kid will be kidnapped, then the resultant contract would be voidable at the option of person B.

Similarly, if Person A fraudulently gives 250 grams of onion in place of 1 kg for the same rate, then the contract between them would be voidable because of the absence of free consent.

·      Lawful Object: The object of the contract should be lawful and in respect to the public policy or else the contract would be void.

Illustration: If person A i.e. the vegetable vendor comes in contract with person B for kidnapping the competitor, then the contract between them would be invalid because of an unlawful object.

·       Agreements must not lack certainty: As per section 29 of the Indian contracts act, an agreement that is not certain and is incapable of being made certain is void in the eyes of the law.[9

·       Legal Formalities: Wherever there are legal formalities prescribed by the particular laws, they should be adhered to. Example- writing, registration, witnesses etc.

A contract is one of the most important parts of the law as it regulates the relationships between firms or people. It is a dominant part of most of the corporate industries and helps to give legal backing to the conditions or promises by the parties indicated in the contract. Therefore, it is important for an agreement to satisfy all the essentials and as a result, be called a “Valid Contract”.