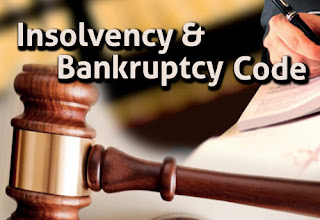 The period before Insolvency and Bankruptcy Code, had various scattered laws relating to IBC which caused insufficient and ineffective results with extreme delays. Considering this, the IBC in 2016 was introduced as money bill recommended by TK Viswanathan Committee. IBC predicts resolution of Corporate insolvencies in two-stage procedure. First stage is the CIRP process that is the Corporate Insolvency Resolution Process and the Second stage is the Liquidation process that is Winding up. IBC was established in 2016 with 255 sections and 11 schedules.

The Code combines two bodies that is the IBBI and the Adjudicating authorities.

And here, the most awaited Insolvency and Bankruptcy Code has finally declared on 5th June of 2020. That is the Changes in the threshold limit, Implementation of Ordinance, Introducing a new section, Amendment to a particular section and there are some of the changes that leads to development that have been taken place in the law in the last four months of the Insolvency Code during this pandemic crisis.
THRESHOLD LIMIT OF DEFAULT:

There is an increase in the threshold limit for filing an application or petition under section – 7, 9, 10 of Insolvency and Bankruptcy Code.

The threshold limit of default has been increased from 1 Lakh to 1 Crore. This has been done for safeguarding the MSME sectors that is Micro, Small and Medium Enterprises. The MSME sectors contributes around 34% of our GDP ( Gross Domestic Product) and it also employs around twelve crore people of Indians. So, the default amount has been increased, mainly giving relief to MSME sectors in specific.
So, the Government planned to increase the default. Only when there is a default of more than 1 Crore, the Creditor or the Company is allowed to file a petition under Section – 7, 9, 10 of the Insolvency and Bankruptcy Code.

INTRODUCING SECTION – 10(a) IN IBC:
This Section – 10(a) of IBC does not withstand with anything contained in Section – 7, 9, 10 of IBC. Section – 10(a) explains regarding suspension of Insolvency code. Everyone must understand that the entire Insolvency filing of new petition is not suspended.

During this time of Pandemic crisis, many companies are declared Bankruptcy and faced disruption to normal business. This Ordinance provides them calmness. Borrowers may see it as a temporary relief. So, during this protection period if any default is committed by the company, there can be no action taken against them under Section – 7, 9, 10 of Insolvency and Bankruptcy Code.

AMENDMENT TO SECTION – 66:
The Second most important amendment, which has been introduced by the Insolvency Ordinance and this is an amendment to Section – 66. This amendment gives relief to the directors and partners of the corporate debtors during this protection period. This Ordinance protects a director of a company and the partners from proceedings that are being initiated against them for a wrongful trading.
Section – 66 of Insolvency and Bankruptcy Code deals with the fraudulent trading and wrongful trading. If a person knowingly parties to the carrying on of business with a dishonest intend to defraud Creditors, to make contributions to the assets of the corporate debtor as per the order of the Adjudicating authority. In this provision, the directors of the company and the partners of the LLPs are made liable for such debts where the company had been fraudulently trading or wrongful trading, they will be made liable for such debts. This section has been slightly amended by the Insolvency Ordinance. This Ordinance does not talk about any aspects of the fraudulent trading, it is about wrongful trading.

So, if the company is in bad shape but they wanted to continue the business even in the financial trouble, it is like when a company pays the employees before paying the bank and continues the business, and then in such a case the Government has protected them from their personal liabilities for this default period that is during this protection period of six months. So, now when you continue the business even in the turbulent times, the directors and the partners are not made personally liable.

1 thought on “Recent Developments in IBC”