Ramifications of the authoritarian ruler Putin’s policies can be seen in the form of non-violent protest on the streets of Russia. During the time of the Tsars, Russia has seen lots of violence and protest in order to overthrow the monarchy, seeing the current situation, it seems that history is repeating itself but in a very peaceful manner. After Lenin, mRussia is beholding among the largest protest against the government. 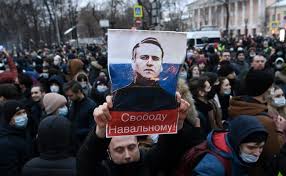 More than a thousand numbers of people detained on a daily basis and the government’s response to this are classic examples of how an authoritarian government handles the situation.[i] The only difference between the protest in Russia in history and the current time’s protest is, method of non-violence to show the dissent. Because Russia was known for it using violence to show dissent against those in power.

In 1917, how the Russian revolution took its true color and inspires not only the European countries but also Asians, many Indian freedom fighters were inspired by it. During the early phase of the 20th century, there was unrest among general people due to harsh policies of a monarch, a socio-economic problem such as starvation, absence of peace among the army, was seen in Russia due to its participation in First World War in 1914. All public authorities were rejected, in order to bring the monarchy down.[iii]

Before Russia got its first communist leader Lenin, it was ruled by monarch Tzar Nicholas. They have control over everything including church, land, and army.[iv]But as Lenin came into power his motto was, the land belongs to the landless, bread belongs to the breadless, and peace among the army. Even though people consider Lenin better than Stalin, he used to hang peasants publicly to set an example, executed 28,000 people every year; it was his policies that Stalin had followed,[v] Due to Stalin policies over 20 million people died, some in Gulag (camp in Serbia), famine, starvation, forced collectivization, execution.[vi]

It is such an irony that two prominent leaders of the Russian revolution who became Premier of Russia after 1917 did all the same thing for which they fought against the monarch which shows ‘you are what you most’. But it’s very pleasing to see that how in the present situation people of Russia didn’t show any dissent in a violent way and using the method which is shown by Tolstoy and Gandhi to the world i.e. non-violence.

Name like, M K Gandhi and Tolstoy needs no introduction, their contribution are relevant in today’s era. But for a brief introduction, starting from Leo Tolstoy, his books were banned in his homeland (Russia). Because he preaches that Christ’s teaching is the epitome of non-violence and doctrine of non-resistance by citing the Gospel[vii]. But at that time Russia didn’t ready to hear or understand the word ‘non-violence’. When his book ‘The kingdom of God is within you’ published in Russia, suddenly it gets banned then as always Germany comes in support of this book (as what ban in Russia, higher chance to getting publish in Germany and vice versa).[viii]Leo Tolstoy was among very few Russian who supported non-violence.

M.K. Gandhi was very inspired by the writings of Tolstoy and his doctrine. Mahatma Gandhi is the epitome of non-violence firstly in India then for the whole world as in any peaceful protest in the world, influence his policy of non – violence can be seen. Gandhi is an example that shows that peaceful protest can convince the authoritarian state to do the needful as demanded by civilians. He was one of the leading freedom fighters of India who helps a nation to get freedom peacefully but he was not only responsible for India’s freedom but also many countries including South Africa, Argentina, etc. In the word of MartinLuther King Jr. (American civil rights activist) “Christ showed us the way, and Gandhi in India showed it could work.”[ix]

It appears like history is repeating itself, like it was out of the question to overthrow Stalin, till his death. The same is happening with Putin, as Alexei Navalny had tried but failed.[x]There is no doubt that Russia is one of the most powerful countries across the world but it is also clearly seen from the status quo that all the protest during the Russian revolution is not for the same cause, the founding father of Russia didn’t execute the revolution for someone to take the president ship and do all the same thing as monarch do. They wanted the free and fair election and for Russia, it is like a mirage to happen. Russia is powerful in terms of weapons they have, economy, infrastructure, but it lacks at civil rights of the general public.[xi] As showing dissent to the ruling government is the most powerful tool in the modern world to overthrow them but the Putin also doing the same thing to disperse the protest into as Lenin and Stalin did.

What makes this protest distinct is that the public is not using the method shown by Lenin- Stalin but they used the Gandhian way to tackle the current situation.[xii] Currently the prominent leader of the opposition is in jail, they are huge corruption charges against the government, the economy is down, Public was not pleased by the performance of the government during COVID-19, but they show their dissent in a peaceful manner then also the government is using the same techniqueto dismantle the protest.[xiii]Public of Russia saw that how the protest at the time of Lenin- Stalin takes place, as how many people died at that time in a brutal manner and they also saw what happened after the protest as their leader was using the same manner to rule the country as the monarch did, killed all those who oppose them. It can be said that the current ongoing protest in Russia is seeing another authoritarian ruler, but people are adopting non-violent ways to throw him out of the seat, unlike they did during the time of Tsars. Russian has chosen the doctrine of non-resistance; this time also they come to the road but in a peaceful manner.

Russia has witnessed the era of monarchy and violence, thus now it is changing and adopting the Gandhian method of non-violence. Currently, not just Russian people are protesting against Putin, instead of countries like France,[xiv] the USA.[xv]Now let’s hope for a better future not only for Russia but the whole of humankind as Tolstoy quote the Gospel doctrine of non-resistance as the only method to get peace, fraternity, and liberty in the world.[xvi]