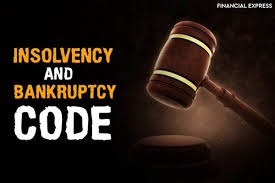 Purpose of Article- This research paper specifically focus on the position of the Insolvency and bankruptcy laws in India and objective of Insolvency and bankruptcy Act 2016. The paper deals with the framework and applicability of this act. Legal environment of a country play an vital role in the economic development of a country . IBC act is a type of legal change which seeks to develop the existing framework of initiating business in the country and make it easier. Several amendments has been enacted in this act to promote entrepreneurship. The main reason behind the enactment of this act is that , to revive the company from Insolvency and bankruptcy.

Introduction
The Insolvency and Bankruptcy Act 2016, exists in India which aim’s to integrate the current structure by evolving a one law for insolvency and bankruptcy. In December 2015, the IBC code has been introduced in Loksabha. On 11May 2016 , this act has passed in house of people(Loksabha). On 28May 2016 , the act has received the assent of president. This act aim’s to safeguard’s the interest of investors and the act make easy to initiate a business in India. IBC act contains 255 sections and 11 schedules. IBC is not only for the strengthen India’s position in the field of legal environment but this act gives new identification to India at the global platform economically. It is assumed that, in limiting the risk of credit, IBC will play significant role.

Swiss ribbons pvt. limited v. Union of India – In this case , the constitutional validity of Insolvency and bankruptcy act, has been challenged. The honorable Supreme court of India held that , the difference between financial and operational creditor in this act is neither arbitrary nor violate the Article 14 of Indian constitution . Intelligible differentia exists between the operational and financial creditor , which has a direct relation to the purposes maintained by the act.

Background
To improve ease of doing business ranking of India and enhance the boldness of international investors and entrepreneurs in Indian debt market are the main reasons behind this act. Insolvency and bankruptcy act is the integration of several laws e.g. Companies Act 1956, Provincial Insolvency Act 1920, Sick Industrial Companies Act 1985, The recovery of debts due to Bank and Financial Institutions Act 1993 and among many other provisions of similarly situated acts. In May 2016, this act had been passed by parliament but it become effective in December 2016. Provincial Insolvency Act, 1920 has been repealed by section 243 of Insolvency and bankruptcy act.

Regulatory framework and the applicability of Insolvency and bankruptcy Act, 2016

To initiate insolvency resolution process, the act provide a mechanism to creditors, when the debtor is unable to pay his debts. The act distinguishes Operational and Financial Creditors. A plea for insolvency is submitted to the adjudicating authority (NCLT just in case of corporate debtors) by financial or operation creditors or the corporate debtor itself. The utmost time allowed to either accept or reject the plea is 14 days. An Interim Resolution Professional (IRP) appoints by the tribunal when the plea is granted, to draft a resolution plan within 180 days (extendable by 90 days). After that, the court initiates the Corporate Insolvency Resolution process (CIRP). For the said period, the board of directors of the corporate stands suspended, and therefore the promoters don’t have a say within the management of the company. The Interim resolution, if there is any need, take the support of the company’s management for daily operations. If the CIRP fails in reviving the corporate, then in this case liquidation process is initiated.

A financial creditor is one whose relationship with the debtor could be a pure financial contract, where an amount has been provided to the debtor against the consideration of your time value of money (“Financial Creditor”). Recent reforms have sought to deal with the concerns of homebuyers by treating them as ‘financial creditors’ for the needs of the Code. By a recently promulgated ordinance, the Insolvency and Bankruptcy Code (Amendment) Ordinance, 2018 (“the Ordinance”), the quantum raised from allottees under a real estate project (a buyer of an under-construction residential or commercial property) is to be treated as a ‘financial debt’ as such amount has the commercial effect of a borrowing. The Ordinance doesn’t clarify whether allottees are secured or unsecured financial creditors. Such classification are subject to the agreement entered into between the homebuyers and also the corporate debtor. If allottees are not present then ,having a transparent status, there may be uncertainty about their priority when receiving dues from the insolvency proceedings. An Operational creditor may be a creditor who has provided goods or services to the debtor, including employees, central or state governments (“Operational Creditor”).

Insolvency and bankruptcy amendment ordinance, a relief package from Covid- 19?
The immediate ordinance for the amendment in IBC act , looks to give support and provide some exemption and relief to those corporate debtors, who are directly affected by the Covid-19 pandemic. The pandemic has resulted in widespread disruption and break on business activities of the entire country. The IBC amendment ordinance also take the cognition that it will be difficult to detect a number of resolution applicants to rescue the corporate person who may default in discharging of debt obligations due to these disastrous circumstances. That’s why this ordinance looks to prevent corporate persons who are in difficulties and feeling distress due to these conditions. Thus the IBC amendment act 2016 gives them relief and a specific time, so that, they can recoup and regenerate their business.

Amendments in Insolvency and Bankruptcy Code by recent ordinance of 2020
Some new economic measures introduced by the government of India “ministry of finance”. So that, just to give support and collaboration to these new measures and economic, the President of India promulgated the Insolvency and bankruptcy ordinance(amendment ordinance) on 5 June 2020. It was for supporting Indian business affected by Covid-19 pandemic as the whole country was under the lockdown. This Ordinance establishes and introduce the following amendments are as follows, and these amendments in IBC act have become effective immediately-

Conclusion
Definitely 2016 in India was the year of reforms like IBC and GST. It is obvious, that the government of India leaving no stone unturned in its purpose to enhance the Ease of Doing Business in India. A unanimous front has been decided by the parliament legislature , court and SEBI to improve the initiation of business in India .The law is evolving swiftly and loopholes are being pegged. India has a rank within top100 in the ranking of ease of doing business, for the first time. Because of economic reforms in the country like IBC and GST, this jump of India in ease of doing business ranking has been occurred. So, we can also expect the growth in GDP and FDI in the country. According to M.S. Sahoo (chairperson of Insolvency and bankruptcy board of India), under the IBC terms, around 40 thousand corporate debtors cases have been taken and the creditors have got over 50,000 crores, this shows the advantages and benefits of having this code. Undoubtedly, IBC is the landmark legislation which is still evolving and this resolution in India has become more symmetrical , integrated and immediate affair.
Footnotes-
Swiss ribbons pvt. limited v. Union of India ,writ petition (civil) NO. 99 of 2018
https://en.wikipedia.org/wiki/Insolvency_and_Bankruptcy_Code,_2016#Amendments_to_the_Insolvency_and_Bankruptcy_Code
Nisith desai associates , A primer on insolvency and bankruptcy code 2016 February 2019
www.nishithdesai.com @copyright 2019 nisith desai associates
Explanation to Section 5(8), Insolvency and Bankruptcy Code, 2016 (As amended by the Insolvency and Bankruptcy (Amendment) Ordinance, 2018)
https://corporate.cyrilamarchandblogs.com/2020/06/indian-insolvency-law-responds-to-the-covid-19-pandemic-part-ii/#more-3857
Section 10(A) of IBC( as amended by ordinance 2020)
Explanation of section 10(A) ( as insolvency and bankruptcy amendment ordinance by 2020)
Section 66 Insolvency and bankruptcy act ( as amended by the Insolvency and bankruptcy amendment ordinance 2020)
Section 66(2) Insolvency and bankruptcy act