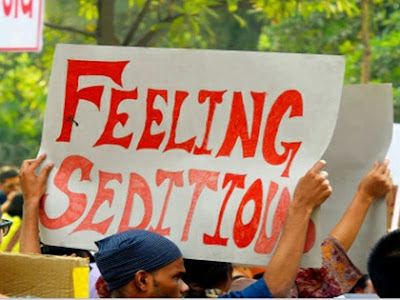 Recently, an exigency to define limits of Sedition law has been felt by the Supreme Court after taking cognizance of indiscriminate usage of Sedition against critics inM/s Shreya Broadcasting Private Ltd and another v State of Andhra Pradesh, Aamoda Broadcasting Company Private Ltd and another v State of Andhra Pradesh, where FIRs were registered against two Telugu channels for alleged Sedition by the Y.S. Jaganmohan Reddy-led Andhra Pradesh government for their reportage of the outrageous mishandling of COVID-19 pandemic by the State govt. The court observed the FIRs as a prima facie attempt to “muzzle media freedom.” The court was of the view that the gamut of the provisions of sedition defined under section 124A of the Indian Penal Code would require interpretation and elucidation, explicitly in the context of the right of the electronic and print media and also to those who may be censorious of the prevalent government.

Sedition, a colonial-era law intended to suppress the voice of freedom is still in effect in India, while Britain repealed sedition as a criminal offence in 2009, seeing it as a remnant of a time when freedom of expression was not recognized as the right, but now it’s a fundamental right. India’s sedition law, section 124A of the Penal Code, proscribes any words either spoken or written, or any signs or visible representation that can have the ability to bring about “hatred or contempt or excites or attempts to excite disaffection,” toward the government established by law where disaffection includes disloyalty and all the enmity.

Section 124A seeks its legitimacy from the constitutional decision of Kedar Nath Singh vs State of Bihar (1962), a landmark ruling which still holds its reference in the present time. This could be inferred from the recent case of Vinod dua v. Union of India where the Supreme Court of India quashed a sedition lawsuit against journalist Vinod Dua and set him free, stating that “Every journalist entitled to protection under Kedar Nath judgment.” In this case, an FIR was enrolled against Journalist Vinod Dua for censuring the Central government where it was held by the Supreme Court, that the remarks made by Vinod Dua can be best named as an articulation of judgment of the activities of Government and its functionaries so the circumstance could be recognized. There was no goal of inciting violence or generating public disorder behind his remarks.

Kedar Nath Singh vs State of Bihar (1962), is a well-renowned judgment not merely because the Supreme Court of India has upheld the constitutional validity of Section 124A in this case but also defined the ambit of the offence of sedition under Section 124A of IPC. The court said, that the explanations affixed with section 124A explicitly manifest that censure of public policy or remark on government action, notwithstanding highly critical, would be within reasonable limits and would be in consonance with the freedom of speech and expression. It is only when remarks, written or spoken which have the detrimental tendency or intention of causing public disorder or disruption in law and order that the law interferes to prevent such activities in the light of a legitimate concern for public order. A citizen has the liberty to speak and express one’s convictions and opinions freely, considering he does not incite people to violence against the government established by law or intend to create public disorder.

The Court has, therefore, the duty endowed upon it to set forth a line of demarcation between the ambit of a citizen’s fundamental right guaranteed under Article 19(1) (a) of the Constitution and the power of the legislature to impose reasonable restrictions with respect to the security of the State and public order. Henceforth, the Kedarnath judgment made it clear that unless the accused incited violence by their speech or action, it would no longer constitute sedition, as it would otherwise violate the right to freedom of speech guaranteed by the Constitution. Subsequently, the crucial distinction between “advocacy” and “incitement”, stating that only the latter could be penalized, was drawn by the Supreme Court in Shreya Singhal v. Union of India, the prominent 66A judgment.

Unsurprisingly, the use of Sedition has now become a method to suppress voices of protest in support of the marginalized as furnished by Article 14 database, which shows that there were 25 sedition cases during farm protests, 25 during anti-CAA protests, 22 after the Hathras gangrape, and 27 after Pulwama. The aforementioned database, reveals a 28% increase in sedition cases over the last decade, particularly against critics and protesters. Article 19(1)(a) provides individuals the fundamental right to speak and express freely which is reasonably restricted by Article 19(2) in the interest of public order when pertaining to sedition. However, in India, a recent trend showcases the application of sedition under the IPC being charged on individuals on grounds excepting the instances limited to the interest of public order.

Similarly, According to the data provided by National Crime Records Bureau (NCRB), the crime incidence on Sedition has ramped up exponentially from 51 in 2017 to 93 in 2019. As per this data, 93 sedition cases were registered in 2019 and only two were convicted. It indicates that there exists a need to define the limits of the sedition law and make it more specific as to what activity would constitute sedition and what would not. The provision under Section 124A needs an amendment due to its subjectivity and very expansive breadth. The word “disaffection” is still uncertain and difficult to fathom. Despite the elaboration of this term in the explanation to the section to be inclusive of disloyalty and feelings of enmity, the boundaries of this provision are indefinite.

Indiscriminate application of sedition Law, due to its abstruseness, is proving to be anathema on the legitimate exercise of constitutionally guaranteed freedom of speech and expression, which is guaranteed not only by the constitution of India or statutes of various states but also by numerous international conventions like Universal Declaration of Human Rights, Human Rights Act, European Convention on Human Rights.