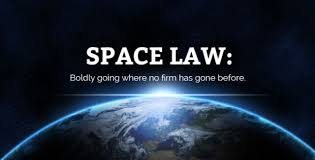 Space law can be defined as the branch of law regulating all the space-related activities in the country. Be it debris from an Indian satellite falling on a Japanese fishing village which trigged  an international dispute or a fault in Indian Space Research Organisation launch destroying a number of satellites of different countries which were to go in space with that satellite no doubt there are many danger for India’s space efforts.

The liability for any damages is determined by the 1972 Convention on International Liability for Damage Caused by Space Objects. According to this treaty countries are “absolutely liable to pay compensation for damage caused by its space object on the surface of the Earth or to aircraft in flight.” without any domestic space law, it is hard for a nation to determine the quantum of damages which resulted in japan taking extra funds from India. And it’s even more difficult to settle a contract obligation from many different countries having different laws.

India so far has only taken small baby steps in formation of accurate space laws. The Space Activities Bill 2017 has been drafted and since then is pending in the parliament. This bill has been drafted to promote, support and regulate all the space activity in India by allowing the must needed partnership between private and non-governmental agencies for space exploration overviewed by the department of space. According to this bill :-

·       The provision of this bill is applicable to every citizen of India and all agencies engaged in space activity in or outside India.

·       A licence would be provided by the government for any commercial space related activity.

·       Central government will be responsible for licencing, fees and eligible criteria for licence.

With recent developments of India made in the Space field such as Chandrayan, Mars Orbiter Mission and that 104 Satellites launched in one go frames gives rise to a very important question as to why s country like India is not having its own Domestic Space Law. Without proper space laws India will have to face many challenges which are discussed below in detail.
·       Space debris

Space Debris is a wasteful collection of man-made objects that are there in orbit above the Earth. These objects can be satellites, Rocket Stage etc. However, the Government doesn’t seem to worry about it and the recent move of ISRO launching a record 104 satellites has been praised all over the world but heavily criticised by G. Madhavan Nair, Former Chairman of ISRO. Mr Madhavan said that this launch was not well planned and could might have collided with other country’s satellite and made India liable to pay damages.

Space tourism today might be seen as an impossible right now. But the space agencies are working towards it and charging a huge amount. companies like Virgin Galactic and SpaceXhas started booking trips to space. Among these things India has found itself in a perplexing condition because there are no laws which regulate these new concept of Space Tourism and the country is known for its cost efficient techniques so now major companies such as Blue Origin, SpaceX are looking to invest in India thinking that it could bring down the cost of Space Tourism as India did with Mars Orbiter Mission. So the future is bright for the Indian space agency and it is necessary that we address issues like these by enacting a domestic Space Law.
·       Space mining
Space mining is the extraction of valuable minerals from the objects of Space such as asteroids, Moon, Planets etc. many countries are making laws to exploit space for minerals like gold, platinum, diamond etc. it’s important for India to have such laws because it would be impossible in future to extract any resource without any treaty.
·       Space war
With an increase in technology and developments in space activity space war is a reality. Fight for territories in space can also lead to wars. India has overtaken a lot of developed countries space agencies and to safeguard Indian satellites and its position in space strong laws are needed
·       Cost effective

Without a doubt India is a reliable and a cheaper option for launching satellites. India is also in agreement with many countries and MNCS to launch their satellite. A strong domestic space law will help to strengthen its position as a strong player in space race

For a strong domestic space law, it’s important to strengthen Indian space agency. It is important to build a strong relationship between ISRO and private industry for future space success. It will be open a lot of job opportunities and will increase the capacity of ISRO. International cooperation is also very essential as it will help to embark on major exploratory programmes through a synergy and assimilating technology and experiences from other nations and it will also help India to have a strong place in global markets of space. Active cooperation is also require for further development of international policy and regulations for vital issues such as prevention of an arm race, safe and equal use of space for every country and space debris management. The most important thing is a strong body of government regulating the space activities of Indian space agencies with regulation to international treaties. It is also important that India has state in art technology so that it can compete with other developed nations for that the policies should be flexible in working with other nation and private agencies for acquiring technology

Without major policy initiatives at the time being India will fail to meet the diverse demands of the commercial sector and will not be able to take full advantage of the opportunities that may rise in future. It is important to have a risk sharing partnerships with private sector and the empowerment of private sector which is only possible by strong domestic space laws. Ignoring such a possibility can diminish the value of investments made over decades in the national space programme.

A legislation broadly covering all the contemporary issues and matters related to space is the need of the hour.it is important that the legislation covers  aspects like implementation of space programmes, and regulation on the safety of launch and space flight and the question of transit of foreign space objects through national airspace and questions of liability.