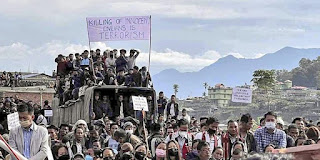 On December 4, 2021, a unit of 21st Para Special Forces killed six civilians near the Oting village in the Mon district in Nagaland, India. In the aftermath of the violence, eight additional civilians and a soldier were killed. For obvious reasons, this episode has sparked widespread indignation among the general population. The Army alleges it was the victim of a blunder in intelligence. According to the Indian Army, the vehicle conveying the civilians was suspected of containing Naga rebels. They further allege that they only opened fire when the vehicle’s halt commands were not heeded. The accusations were dismissed by the two survivors of the tragic tragedy, as well as Nagaland Police, after a preliminary investigation. The situation deteriorated further when nearby villagers, alarmed by the gunfire and locals who had failed to return, rushed to the area and halted a convoy of military vehicles. In the subsequent brawl, army vehicle tyres were punctured and three vehicles were set on fire. Seven additional people were murdered and twenty were wounded as a result of the firing.

The violence was one of the worst outbursts in Nagaland in recent years, which has long been riven by insurgency and ethnic divides fomented by local militant organizations. It’s also not the first time that Indian military personnel have been accused of targeting innocent civilians in their operations. Following the unfortunate incident, Nagaland’s Chief Minister, Neiphiu Rio, urged that the Armed Forces (Special Powers) Act be repealed. Conrad Sangma, the Chief Minister of Meghalaya, backed this demand as well. The “biggest hurdle to justice” in the volatile area, according to Sanjoy Hazarika, a writer and pundit with a specific emphasis on North-East India, is “the comprehensive protection afforded to the security forces” under India’s Armed Forces Special Powers Act (AFSPA). Similarly, several human rights organisations in India and throughout the globe have emphasised the need for the Indian government to repeal the contentious act as soon as possible. This occurrence, which allegedly occurred due to “mistaken identification,” has generated further issues regarding the AFSPA’s need, constitutionality and legitimacy.

The Armed Forces Special Powers Act (AFSPA) of 1958 is an act of the Indian Parliament that gives the Indian Armed Forces special powers to preserve public order in “disturbed regions.” The Disturbed Areas Act of 1976 states that once an area is designated as “disturbed,” it must remain such for at least six months. The AFSPA was first implemented in 1958, during the administration of Congress, to combat widespread insurgency in the North-East.Following independence, the Indian government considered it essential to enact anti-terror laws in order to preserve peace and order and to substantially crush separatist beliefs in certain places. On September 11, 1958, a law was enacted that applied to the Naga Hills, which were then part of Assam. It expanded to the other Seven Sister States in India’s northeast during the next several decades, one by one. Another, enacted in 1983 and applied to Punjab and Chandigarh, was repealed in 1997, about 14 years after it was enacted. Jammu and Kashmir have been governed under a law enacted in 1990 that has been in effect since then. It is now in effect in Assam, Nagaland, Manipur, and certain parts of Arunachal Pradesh.

The Armed Forces Special Powers Act (AFSPA) provides the Armed Forces with broad powers, enabling them to hold people and even launch fire on the basis of suspicion alone. According to Section 4 of the Act, “any commissioned officer, warrant officer, non-commissioned officer, or other person of equivalent rank in the armed forces may,” among other things, “fire upon or otherwise use force, even to the causing of death,” against anyone who violates law or order in a supposedly “disturbed area.” Officers may also “demolish” any facility or shelter from which armed assaults are made, are expected to be made, or are tried to be made, if they believe it is “essential.” AFSPA has been heavily criticised by numerous sections throughout the years for stating worries about human rights abuses in the areas where it is supposed to be enforced. There is no statistical evidence that the law has been successful in combating insurgency in the area in recent decades. Under the guise of keeping “public order,” this has generally allowed for extrajudicial executions in the area. To begin with, a region’s designation as a “disturbed area” is based on ambiguous political judgments. Currently, under the AFSPA system, the Armed Forces have blanket immunity for whatever acts of violence they commit under the guise of national security.

The judiciary’s position with respect to AFSPA

The Supreme Court has been referred to as the “custodian” and “guarantor” of people’s rights on several occasions. However, in terms of judicial action, it has given little to no assistance in the case of military atrocities. In Naga People’s Movement for Human Rights v Union of India (1998), the Supreme Court maintained the AFSPA’s validity while also establishing a few protections for arrest and detention. The Supreme Court decided to focus on the act’s legality rather than its harsh character and lack of accountability. The Court subsequently validated “military dominance” by enabling the Armed Forces to operate with impunity for the abuses perpetrated under the Act. According to Hillyard, the court becomes involved in the “violence of jurisprudence” in such cases, and the state plays a role in perpetuating the condition of violence. A similar approach to the law may also be seen in some of the judgments of other courts around the nation.

In India, many government-appointed commissions have recommended that the statute be repealed. The administration, however, has failed to follow the suggestions due to army objections. Several UN human rights organisations have also urged the law’s repeal. The AFSPA has safeguarded security force officers from prosecution in civilian courts, even in the most high-profile examples of extrajudicial murders, while military tribunals have finally cleared them of any wrongdoing. The army stated in November 2014 that a military court had sentenced five troops to life in jail for fabricating an armed encounter and murdering three civilians in a Jammu and Kashmir district in 2010. However, in July 2017, a military tribunal postponed the sentence and discharged all five defendants under the Armed Forces Special Powers Act (AFSPA). In a historic 2016 judgement, the Supreme Court underlined this lack of accountability by stating that every accusation of uniformed personnel using excessive or retaliatory force that results in death deserves a comprehensive investigation. Even in an area deemed a disturbed area under AFSPA and against militants, insurgents, and terrorists, the court stated, such force was not permitted. Despite several Supreme Court judgments and cases, the central government has refused to prosecute military forces personnel in all incidents of extrajudicial murders, invoking AFSPA.

It’s worth noting that the Constitution offers enough protection by allowing the state many tools to restrict freedom and liberty when a state of emergency is declared. The constitutional structure, on the other hand, forbids the use of such emergency powers during regular times. Anti-terror legislation should not be allowed to function under the “state of exception,” which allows the government to override the rule of law in extraordinary situations for the greater good. Although the state may use anti-terror measures to violate the rule of law in exceptional circumstances, it must do so within the constitutional protections outlined in Article 22(7), as envisioned by our drafters. To put it another way, harsh anti-terror legislation like the AFSPA that operates during regular times, beyond the reach of this clause, would indicate that they lack the constitutional authority to restrict people’s freedom and liberty. Furthermore, the continued implementation of anti-terror laws like the AFSPA jeopardises the right to life and dignity guaranteed by Articles 19 and 21 of the Indian Constitution. While the Constitution guarantees freedom of speech and expression as well as civil liberties, anti-terrorism legislation such as the AFSPA continues to undermine these rights.

Conclusion and the Way Forward

As a result, the government must assess the impact of harsh counter-terrorism measures on civil liberties while also recognising that they jeopardise the promise of constitutional morality. Allowing the state of exception to become the new norm would reduce democracy to a figment of the imagination. To maintain minorities’ faith in democracy, the state must implement constitutional morality as envisioned by Dr. BR Ambedkar, thus recognising the existence of minorities like the Nagas as vital to that of other citizens. There is an imperative need to decolonize our legislative corpus in order to eradicate laws that inadvertently foster a culture of fear in the name of control. The AFSPA has not only deprived local populations in the North-East of their fundamental human dignity, but it has also spawned extremists, allowing the deadly loop of terrorism to continue.

The government has created a Special Investigation Team to look into the matter. It is evident that the continuous use of AFSPA to maintain public order must come to a stop, and the long-overdue demand for its repeal must be granted. Unfortunately, the tragedy may throw a kink in the works for Naga peace negotiations between the government and the National Socialist Council of Nagalim (NSCN-IM) and seven Naga National Political Groups. The meetings’ secrecy hasn’t helped things, though, according to the government’s smoke and mirrors approach to the Peace Accord. The only option now is to demonstrate true contrition for the crimes, bring the perpetrators to justice, and seek reconciliation with the Konyak Nagas via compensation for the violence, in addition to a renewed commitment to completing the Naga peace negotiations. Furthermore, with Myanmar returning to a military regime and India locked in a stalemate with China, it is even more critical that the Centre conduct an unbiased investigation into the incident. It should allow military personnel to be prosecuted if necessary and examine the AFSPA processes. Most significantly, there is a pressing need to revisit AFSPA and reconsider its future in order to prevent such catastrophes in the future.

This blog is authored by Arnav Laroia, student of National Law University, Jodhpur