You all might be thinking about how Media can conduct a trial or how the media can do a job that is supposed to be done by courts. But this is how the Indian judicial system works. Trial by media is a phrase popular in the late 20th century and early 21st century to describe the impact of television and newspaper coverage on the person’s reputation by creating a widespread perception of guilt or innocence before, or after, a verdict in a court of law. 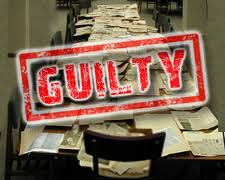 It’s just that, with the passage of time the impact of what the media says has increased and its active participation on every topic has led people to blindly believe on that specified issue. In the present scenario, the media trial is used as slang for those high profile cases wherein the journalists present a pre-decided picture of an accused and start spreading hatred amongst the general public which can ultimately affect the trial and the judgment. Due to this, it not only makes a trial fully biased but regardless of the result of the trial the accused will not be able to live the rest of their life without intense public scrutiny. However, media can be commended for starting a trend where media plays an active role in bringing the accused to the hook.

The trial is essential, a process to be carried out by the courts and for the judicial system to be carried out properly, it is essential that the accused should receive a fair trial. The Right to Fair Trail i.e. a trail uninfluenced by extraneous pressures is acknowledged as a basic tenet of justice in India. Legal provisions aimed at securing the said right are contained under the contempt of courts act, 1971 and it is regarded as a fundamental right under article 21 of the constitution. In spite of all that, the trial by media is definitely an undue interference in the process of justice delivery. It completely overlooks the vital gap between an accused and a convict keeping at stake the golden principles of ‘presumption of innocence until proven guilty’ and ‘guilt beyond reasonable doubt’. Media builds a public opinion against the accused even before the court takes cognizance of the case. If excessive publicity in the media about a suspect or an accused before trial prejudices a fair trial or results in characterizing him as a person who had indeed committed the crime, it amounts to undue interference with the “administration of justice”. High-profile civil litigation is not just decided in the courts; it also is decided in the court of public opinion. For this reason, rules and beliefs have developed as to how lawyers may appropriately engage the media to mitigate its impact on their clients. Media is so much into our daily life’s that judges too can’t stay away from it and they usually tend to give a verdict as per media reports.

Media is regarded as one of the four pillars of democracy. Media plays a vital role in molding the opinion of society and it is capable of changing the whole viewpoint through which people perceive various events. The pivotal role of the media is its ability to mobilize the thinking process of millions. Media do play a role as Watchdog and bring the facts as it is there. It acts as a mirror for society. In cases, the media only brings the facts coming from investigating agencies and puts them in front of the society, so that society can be aware of the facts happening around them. They have a right to know and express their views on that particular case and media just act as a platform to bring the voice of society.

There has been no legal system where the media is given the power to try a case. In India, trial by media has assumed significant proportions. Some famous criminal cases that would have gone unpunished but because of the intervention of media, it has resulted in proper justice, are Priyadarshini Mattoo case, Jessica Lal case, Nitish Katara murder case, and Bijal Joshi rape case. Nevertheless, in certain instances, journalists portray a pre-decided image of an accused thereby tearing his/her reputation that can eventually affect the trial and the judgment, henceforth trial by media. With the case of Sheena Bohra’s murder, the excruciating eyes of the media have pierced the personal life of the main accused Indrani Mukherjea which has kicked in a fresh debate on the issue of the media trial of the accused. Every aspect of her personal life and character which have nothing to do legally with the investigation of the murder is under the public lens of scrutiny via the media.

From the above account, it becomes clear that the media had a more negative influence rather than a positive effect (except for a few exceptions here and there). The media cannot be granted a free hand in the court proceedings as they are not some sporting event. In recent times there have been numerous instances in which media has conducted the trial of an accused and has passed the verdict even before the court passes its judgment. The way the media uses freedom of the press has led to a heated debate between those who support a free press that is largely uncensored and those who place a higher priority on an individual’s right to privacy and right to a fair trial. The most suitable way to regulate the media will be to exercise the contempt jurisdiction of the court to punish those who violate the basic code of conduct. The use of contempt powers against the media channels and newspapers by courts has been approved by the Supreme Court in a number of cases as has been pointed out earlier. The media cannot be allowed freedom of speech and expression to an extent as to prejudice the trial itself.