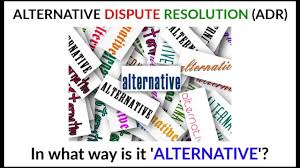 Judicial system of India is one of the oldest judiciaries in the world. In a rapidly developing country like India were it involves lot of time and money for settling a dispute through litigation, there arose a need for settling disputes in a cost efficient and also less time consuming method which eventually paved the way for Alternative Dispute Resolution in India. ADR gives a great platform for both the parties to deal a dispute in a more cost effective manner and also get peaceful solutions There are totally 5 mechanisms in ADR they are: Arbitration, Mediation, Conciliation, Judicial settlements and Lok Adalat.

WHY IS ADR NEEDED IN INDIA?
ADR basically is regarded as the one method of settling dispute which is entirely different from traditional method and also a swifter one in resolving disputes which will be amicable to both the parties. In recent years the usage of ADR in India has increased a lot, that’s mainly because people nowadays prefer to settle disputes outside the court and also in less time which is the need of hour in a country like India where we have a large pendency in cases, so to reduce the burden of courts ADR was adapted in our country by The Chief Ministers and Chief Justice of states in a conference  held on November 4 1993 in New Delhi which was headed by the then Prime minister of India and presided over by The chief Justice.

IMPORTANT PROVISIONS IN RELATION TO ADR

The main aim of this act is to give a consolidated law which includes domestic arbitration,   International Commercial arbitration, rules regarding conciliation and also enforcement of arbitral awards.

SECTION 89 OF THE CIVIL PROCEDURE CODE

According to this Section, when a court sees any possibility for the settlement of a dispute  outside the court premises then it can order for settlements with the consent of both parties and it may also be used in arbitration, conciliation, judicial settlement through lok adalat and mediation.

In this Section, It is mandatory for the Family Courts to order for settlements if they see any reasonable possibility of a settlement between two parties outside the courts.

SECTION 107(2) OF THE CODE OF CIVIL PROCEDURE

·       Firstly the applicant should file a statement of claim which contains facts and remedies in accordance to the case and it must also include the arbitration agreement.

·       Secondly the process of selecting arbitrator takes place in which both parties are allowed to select their own arbitrators.

·       There will be a personal meeting between both parties in which parties submit arguments and evidences from their sides.

·       After the evidences and arguments are being examined the arbitrator gives an ‘award’ which is amicable for both parties.

Mediation is a simple and very informal process in which a third party named mediator will help both the parties to reach an amicable solution. In mediation both parties have full freedom and mediator only can suggest more opinions or options for both the parties but cannot give a solution. Mediation also includes certain procedures or it may also be called as role of mediators, they are:

·       First of all the mediator has to establish that he doesn’t have any connection with either of the parties, then he will explain how the process of mediation takes place.

·       After he explains the process of mediation he starts collecting all the information from both sides, understands the issue and then helps both the parties to open up about their disputes.

·       To have a deep understanding of the issue mediator will arrange for personal meetings with both the parties.

Conciliation is also a form of arbitration but it is slightly different from it because in case        of conciliation, the conciliator will meet both the parties separately to reach amicable solutions. Process of conciliation starts only when there is a written agreement to conciliate a dispute, if either of the parties does not want to accept the invitation then conciliation process won’t take place.

Lok Adalat which is popularly known as“ People’s Court” is headed by sitting and also retired members of judiciary or legal activists as their chairman. National Legal Service Authority in connection with various other Legal Services Institutions manages Lok Adalat to settle any kind of dispute which is pending before normal courts and it is also much quicker than other courts of Law in serving justice to people. The biggest advantage in Lok Adalat is it doesn’t have any court fees and it also refunds the fees which were paid in the court. Parties can also facilitate a direct interaction with Judges which is hardly possible in normal courts.

CONCLUSION
ADR in general has been widely used to reach better and peaceful resolutions throughout the world, the presence of all these mechanisms is making ADR an amicable solution. So the author strongly suggests that it is the role of government and other government bodies to make an awareness for people to know more about ADR which is less procedural and time saving which is very much needed for today’s modern world
Image Credits https://images.app.goo.gl/LfX4GNJPFiuWd9Vg8