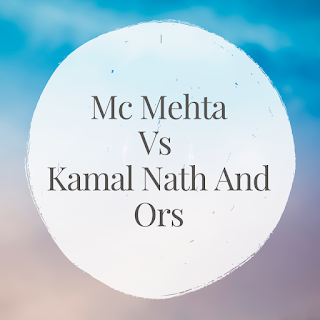 It was the landmark case which was held in the year of 1996 in the Indian Environmental Law. Therefore, in the above case the supreme court of India held in the Judgement that Public Trust Doctrine applied in India.

Facts of the case:

*The Indian Express published an article that grants the reporting that Span Motels pvt. Ltd., which owns span resorts, whereas had floated another ambitious venture called span club.
*The Indian politician Kamal Nath whom in context of the direct links of his family members with the above company therefore, the club named span club which was built after encroaching upn the 27.12 bighas of a land and also include the substantial forestland in 1990 and also the land was leased out to the company on the date of 11 April 1994.
*The above transaction which was regularization when Kamal Nath was the Minister of Environment and Forests the above transaction was encroached to the swelling of Beas River the swollen river change it states of course and engulfed the span club and adjoining lawns therefore, washing it away. The process reacher for almost 5 Months and also the span resorts and their management moving bulldozers and the earth movers to course the turn of the Beas for the another time.
*The main cause of understanding the fact the the worrying part where river eating into the mountains which lead to the landslides which were the occasional occurrence throughout the area the cause that effect the margin of the property in the month of September these caused the floods in the Beas and estimated the deficiency in the rates of worth rps 105 crore.
*The letter dated 24.11.1993 was addressed in regard to this cause the Government of India, the Ministry of Environment and Forests which was addressed to the secretory of Forest of Himachal Pradesh, Shimla conveyed it terms of the Forest(conservation) act,1980 and deals with the section 2 of the act and also leasing to the Motels to 27 bighas and 12 biswas of theland which was already on lease with the Motel whereas, an expert committee also appointed to look into the matter and bring out the cause into the conclusion.
*The condition of the rives shows the regime and also highly unstable which was due to extraordinary floods of 1995, and it seem to be difficult in terms of the behaviour of the floods which will occur in the nearer future.

1)Whether the court has wrongly inducted Mr Kamal Nath as a Respondent in the present petition?
2)Whether the construction activity carried out by the Motel Company justified?

*The first issue in accordance to the respondent had never disputed the fact that raised that Mr Kamal Nath and his family holds the whole share of the company “Motel”.
*The second issue that raised, the respondent clarify their part that the construction activity which was carried out by the “Motel company” on the land which was under their own possession with the view to protect the property from lease-hold.
*Therefore, the Forest officer are also permitted to the Motel Company to carry out such construction activities with subject to the condition to that department and would not be liable to pay for any of the amount incurred by the Motel Company for said construction.

PROCEEDINGS BEFORE THE FINAL JUDGEMENT:-

The Apex Court took the notice of the published news in the “Indian Express” on the date 25th February 1996. The news reported that the Minister of Environment and Forest Mr Kamal Nath who was reportedly says had some kind of direct links with the Span Resorts.
Therefore, also the Company had floated an ambitious venture called the Spam club. The club represent the dream house of the Kamal Nath on the Bank of the Beas. The report also stated that the forest land was encroached and in the later times regularized. The process of regularization was held at the time when Mr Kamal Nath was the Minister of the Environment and Forest.

Mr Kamal Nath had filed a counter affidavit that stating that he was wrongly arrayed by the petitioner as a respondent in the referred petition. In the case the court held that the matter disputed by Mr Harish Salve, learned the counsel appearing for Mr Kamal Nath and their family members and also added that the respondent and their family members owned by the shares in the Motel Company are all owned by their family members and also the management of the company was took over the Motel in the year of 1981 and counter a fresh lease was duly signed on 29th September, 1981.
In the next cause where Mr B.L Mathur, on the behalf of the Span Motels private limited filled an additional counter affidavit. Therefore, the affidavit stated that the land was granted on a lease to the Motel for almost the period of 99 years and along with the other affidavit stated that thew correspondence between the Motel company and the Government was annexed.

The court held that at the time of clearance was given and lease granted Mr Kamal Nath was the Minister incharge of the department of Environment and Forest .The Motel company was writing the government for the lease of the additional forest land since 1988 , it was 1933 when Mr. Kamal Nath was the Minister in charge that the lease was granted.
After the counter part of all the affidavit court held the following facts-
1) The hold area mentioned the the lease of possession are a part of the protected forest land which owned by the state government.
2) The land that measured 26 bhigas of forest leased by the Motel company bu the lease deed dated 11th April,1994 is situated right back of the river.
3) There was also a wooden bridge that connect the the spill channel to the main Motel land and also the land acquired under the 1994 lease-deed.
4) Whereas, 22.2 bhigas out of the land leased to the Motel in the year 1994 which was encroached upon by the Motel.
5) The river which was flooded in 1995 and after the Motel has dredged the left side channel of the river to increase its capacity it was done withe view of curtail the entry of the water into the right side of the channel.
6) The company created the 190 m wire crates on the Bank of beas which dredged material is piled up on the banks of river and that process channelizing ont he large scale to he left bank with the view to keep high intensity of the flow away from company Motel.
7) The dredging the river caused blasting the big boulders and removing the debris.
8) The front which called the mouth of the natural channel has been blocked due to the crates and dumping of boulders.
9) Which also states that the construction wok was not done under the supervision of expert.
10) Therefore, the work under the construction was undertaken by the Motel for channelizing the main course which divided the main stream into the two which can also again change its course.
The supreme court applied the “Doctrine of Public Trust” to the case the doctrine rests upon the principle that the certain resources like air,water,sea etc.. have a great importance to the people as the whole and it is unjustified to use the property for private ownership. It is irrespective to use the gift of nature for the private consumption by break a trust of nature.

1) The Doctrine of Public Trust is the part of the law of land.
2) The court quashed the lease-deed which was granted to the Motel Company by the forest land held that the construction activity carried out by the ,Motel Company was unjustified.
3) The Motel company was ordered by the court to pay the amount of the compensation by the way of the cost for the restitution the environment and area covered in the ecology.
4) The court also held the order the the company to construct the boundary wall at a distance of 4 meters for the building of the Motel beyond and they were not allowed to use the land of the river basin.
5) The court also restricted the company from discharging the untreated effluent into the river. And also order te pollution control board to inspect and check.

The supreme court held the Doctrine of Public Trust being the part of the law of land. Therefore, the application of the Indian Law was further confirmed in the case of Maharaj singh vs Indian oil corporation and further it was retreated in the case of M.I Builders vs Radhey Shyam sahu. The above doctrine provide the increase in the efficiency and effectiveness of the impact of the Environment impact Assessment Laws and also makes it a duly duty of the state to look into it and protect the ecological and environmental resources gifted by the nature of the country.