Under Indian Legal System there are three provision regarding the granting of Maintenance to one spouse of marriage from the another. First, is section 24 and section 25 of Hindu Marriage Act, 1955. Second is, section 18 of Hindu Adoption and Maintenance Act, 1956. Third is, section 125 of Criminal Procedure Code, 1973.
This Blog will discuss only two provisions i.e., Hindu Marriage Act, 1955 and Hindu Adoption and Maintenance Act, 1956. Further its requirements and in last some difference between both of the provisions. 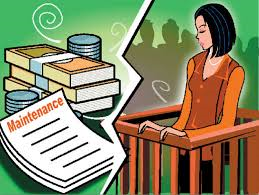 ‘Maintenance’ has been defined under section 3(b) of the Hindu Adoption and Maintenance Act, 1956 to include :

i. In all cases, provision for food, clothing, residence, education and medical attendance and treatment; and
ii. In the case of an unmarried daughter also the reasonable expenses of, and incidental to her marriage.[1]  Maintenance is the financial sum or economic support granted by the court from one spouse to another spouse. This is granted by the court only when one spouse is unable to maintain financially himself or herself both during the ongoing proceeding of divorce or post – divorce.
The allowance can be periodical or be lump sum i.e., monthly, yearly or a hefty amount at once. These allowances are given, so that the person can live his or her life with dignity and to fulfill his or her basic needs like food, clothes, house , etc.

Under Hindu Marriage Act, 1955 there are two section regarding the maintenance granting in the matrimonial disputes.

Second is, section 25 of Hindu Marriage Act, 1955 this section grants permanent maintenance i.e., alimony to that party who is unable to sustain his/her life or not able to fulfill basic needs for living. This type of permanent maintenance can be granted in two forms either periodically or in lump sum amount. Any order of maintenance regarding section 25 if periodical will last only the life of the applicant and not any time exceeding his or her lifetime.

In Jagdish v Manjula,[3] the court held that the wife cannot be denied maintenance on the ground that the decree was passed against her on account of her cruelty. May be, a woman has committed adultery once, this does not in any way means that all her life she should be condemned to live in adultery. If the wife has ceased to live in unchastity she is entitled to maintenance. If this will not be done, it would, in most likelihood, condemn her to live in immorality, especially in a society like ours, where most women are still dependent on husband, parents, etc.

This act provides maintenance to all the dependents of any individual not just only the wife. Its various sections promises many dependents like wife, widowed daughter in law, children, aged parents and all other dependents. Section 18 of this act specifically deals with the right of maintenance given to the wife.

Under section 18 any Hindu wife is allowed to claim maintenance from her husband for her lifetime and it is immaterial whether their marriage was solemnized before or after the commencement of this act. A wife who has ceased to be a Hindu cannot claim maintenance under Hindu Adoption and Maintenance Act, 1956.

In Krishna v sakharabai,[4] the court held that the Hindu wife contemplated in section 18 does not include the wife of a void marriage. Section 18 of HAMA strictly contemplates a proceeding by a wife during the subsistence of her status as wife. In other words, only a wife who continues to have that legal status has the right to claim and receive maintenance. Section 18 does not permit a divorced wife or a wife whose marriage has been declared void by a decree of nullity to claim and receive maintenance.