You all might be thinking that Love Jihad Law would be related to something that involves law to protect the struggle or efforts of Muslim lovers to build a good Muslim community as Jihad means a believer’s internal struggle to live out the Muslim faith and to build a good Muslim society. But you all are wrong in this aspect as Love Jihad Law or legally referred to as Prohibition of Unlawful Religious Conversion Ordinance, 2020 means a law against forceful inter-faith conversions or in other words a law ostensibly aimed at curbing forcible or fraudulent conversions, including those for the sake of tying the knot. 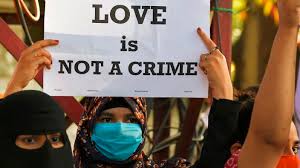 The law makes conversion non-bailable with up to 10 years of jail time if undertaken unlawfully, that is if “done through misrepresentation, force, undue influence, coercion, allurement, fraudulent means” or solely for marriage. Under the proposed law, anyone wanting to convert into another religion would have to give it in writing to a District Magistrate at least two months in advance. However, under the new law, it would be the responsibility of the one going for the religious conversion to prove that it is not taking place forcefully or with any fraudulent means. Moreover, it proposes among other things that a marriage will be declared void if the sole intention of the marriage is to ‘change a girl’s religion’.

Till now, you all might be assuming that Love Jihad law and Love Jihad are the same in every aspect. But it is not like that despite the fact that some media, reported that the law was related to “love jihad”, even calling the ordinance the ‘love jihad law’ and ‘love jihad ordinance’ however, the law itself contains no mention of love jihad. Love Jihad or Romeo Jihad is an Islamophobic conspiracy theory alleging that Muslim men target women belonging to non-Muslim communities for conversion to Islam by feigning love and on the other hand, Love Jihad Law prohibits forceful inter-faith conversions or unlawful religious conversions. In the past few months, cases of alleged ‘Love Jihad’ have been reported from different parts of the state, especially eastern and central UP. As of 25 November 2020, four BJP-ruled states: Uttar Pradesh, Madhya Pradesh, Haryana, and Karnataka, were mulling laws designed to prevent “forcible conversions” through marriage, commonly referred to as “Love Jihad” laws. The first case under this legislation, which intends to crack down on ‘Love Jihad’ but doesn’t mention the controversial term, has been registered in Bareilly district on a man’s complaint that youth from his village lured his daughter and was now forcing her to convert.

DOES IT HAMPER THE DIGNITY OF WOMEN?

The need for the law was to control the cases of ‘Love Jihad’, a term used to discredit marriages between Muslim men and Hindu women as concerned efforts to cause conversions using the pretext of love along with that the law leads to an unreasonable intrusion into the domain of personal autonomy and communal stereotypes. There are many troublesome aspects in this ordinance that treat every religious conversion as unlawful unless certified by the state, which implies that the government can interfere in the most personal decision that a woman makes: choosing a man she wishes to marry. The focus of the law is on a deeply problematic provision of the ordinance, which seeks to criminalize religious conversions done for the sake of marriage. The law gives state policing powers over a citizen’s choice of life-partner which is against the fundamental rights to individual autonomy, privacy, human dignity, and personal liberty guaranteed under article 21 of the constitution. The law undermines the agency of women by viewing them as ‘properties’ needing protection from men of another community. The very concept of forcing an individual to explain and justify a decision, which is closely personal to her, before an officer of the state is contrary to constitutionalism and leads to an unreasonable intrusion into the domain of personal autonomy. So, when women choose to marry outside their caste or religion, it is not ‘love jihad’ but a choice. Not only should Indian women have the right to choose their own husbands but also they should have the right to decide if they want to change their faith. The idea that there is a widespread Muslim conspiracy to prey on innocent Hindu girls and convert them to Islam is ludicrous. So is ‘Love Jihad’

Marriage is primarily a social and legal institution rather than a religious one. Unleashing the law on an inter-faith couple that duly completes the formalities for the registration of marriage reeks prejudice and vendetta. The fact that the governments of some other BJP- ruled states are preparing to jump on to the anti-conversion bandwagon has fuelled speculation that the common objective is to demonize a minority and criminalize conversion even by choice. Such draconian provisions are eventually an assault on our constitution, which equally entitles all citizens to freely practice any religion. And love is meant to be celebrated, not sacrificed at the altar of religion. The UP Law, which strikes at the root of personal liberty and individual choice, runs the risk of being misused to the detriment of a legally recognized union between consenting adults. The law appears to be facially neutral as it does not specify any particular religious community. But a provision of law cannot be viewed as operating in isolation from its social, political, and cultural context. The law is furthering unfounded conspiracy theories which ‘other’ the Muslim community.