Light pollution is one of the most rapidly intensifying types of environmental pollution. In urban regions, it creates a sky glow that could wipe out the stars. A study from 2016 that uncovered that 99 % of the population of the United States and Europe has not experienced natural light at night. Light pollution also has adverse effects on biodiversity. For instance, greater than 4 million migratory birds die every year in the United States due to collision with brightly illuminated towers and buildings as per the American Bird Conservatory. 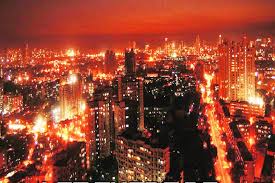 WHAT IS LIGHT POLLUTION?

Light pollution is the term used to define artificial light that illuminates areas that are not meant to be lit. It is the result of ineffective and unwarranted artificial outdoor lighting. It is a form of waste energy that causes negative consequences and degrades environmental quality. Singapore, Qatar, and Kuwait are some of the most light-polluted countries in the world. This alteration of natural cycles of light and dark by artificial light sources has adverse effects on humans, animals, and ecosystems. Its levels have been increasing exponentially over the natural nocturnal lighting levels provided by moonlight and starlight.

IMPACT OF LIGHT POLLUTION ON BIODIVERSITY:

Light pollution affects the human body in numerous ways. It can cause various health issues such as redness in eyes, irritation in eyes, and in some serious cases, permanent darkness in eyes, etc. Excessive light due to light pollution also causes fatigue, headaches, anxiety, and stress. The production of melatonin which is the essential requirement for improving the human immune system might be affected due to long-term exposure to light pollution at night. It also impacts the navigation systems of railways, flights as well as automobiles. Light pollution could also constraint the military’s ability to conduct nocturnal training at bases around the country.

The wildlife is also harmed by light pollution. Constant artificial night lighting disorients organisms accustomed to navigating in a dark environment. For instance, the disorientation of hatchling sea turtles emerging from the sandy beaches. Changes in light level may disrupt orientation in nocturnal animals. A quick increase in illumination causes a reduction in visual capability from which the recovery time may be minutes to hours for frogs. Birds can be confused and trapped by lights at night. Large numbers of nocturnally migrating birds are affected when atmospheric conditions bring them close to the lights. Many insects such as moths, bugs, beetles, lacewings, crane flies, hoverflies, caddisflies, midges, wasps, and crickets are attracted to lights. This attraction depends on the spectrum of light. The insect collectors use ultraviolet lights because of their attractive qualities to attract insects. Terrestrial arthropods vary in their response to lights. Some nocturnal spiders are repelled by light whereas others will exploit light if available.

Natural resource managers exploit such responses of animals to lights. For Instance, lights are occasionally utilized to attract fishes to ladders, allowing them to avoid dams and power plants. The tropics are particularly sensitive to changes in the natural patterns of light and dark because of the year‐round constancy of daily cycles. A shortened or brighter night is more likely to affect tropical species adapted to diel patterns with minimal seasonal variation than extra-tropical species adapted to substantial seasonal variation. The temperate and polar zone species are only active during a portion of the year could be excluded from this overview. Species in temperate zones will also be susceptible to disruptions if they depend on seasonal day length cues to actuate critical behaviours. The adverse effects of light pollution have also been observed in the aquatic ecosystems. Light pollution reduces the capability of the zooplanktons to consume algae from the water surfaces.

In the US, Washington D.C., and 18 states including Arizona, Arkansas, Colorado, Connecticut, Delaware, Florida, Hawaii, Maine, Minnesota, Maryland, New Hampshire, New Mexico, New York, Oregon, Rhode islands, Texas, Virginia, and Wyoming have laws to reduce light pollution. Most of these states have enacted the dark skies legislation. The International Dark Sky Association (IDA) instructs the public and verifies parks and other places that have acted to lessen their light emissions. The IDA sanctioned the first U.S. dark sky reserve in 2017.

For instance, the Central Idaho Dark Sky Reserve which clocks in at 3,667 sq. km. The IDA registers 13 Dark Sky Reserves as of December 2018. The most common Dark Skies legislature entails the installation of shielded light fixtures which emits light only downwards. Replacement of unshielded with completely shielded lighting units often allows for the utilization of a lower wattage bulb. It also saves energy. The municipalities of numerous states have been working on this problem by adopting light pollution regulations as a part of their zoning codes. Most state legislations are restricted to outdoor lighting fixtures installed on the grounds of state buildings, facilities or public roadways. Other laws involve the combination of Illuminating Engineering Society (IES) guidelines into state regulations and the utilization of low glare, or low wattage lighting to control the amount of time that certain lighting could be utilized.
The Texas Legislature amended an existing law in 2007 regarding the regulation of outdoor lighting to empower state counties at the request of the military to espouse measures administering the utilization of outdoor lighting within five miles of a military installation. Texas is the only state in the US with a law specifically aimed at reducing light pollution. In Arizona, law entails all outdoor light fixtures to be completely, or partly shielded with the exclusion of construction, emergency, and navigational airport lighting. In Colorado, the installation of new outdoor lighting fixtures necessitates consideration of energy conservation, costs, glare reduction, minimizing light pollution, and the preservation of the natural nocturnal environment. New Hampshire has made it a priority to preserve Dark Skies as a characteristic of rural nature.
The state’s legislation encourages municipalities to espouse ordinances and regulations to reduce light pollution and conserve energy. The impact of beach-front lighting on avian and marine life is also a concern in various coastal states of US. A state-wide model lighting ordinance guides local governments in developing policies to protect hatching sea turtles in Florida. Puerto Rico, a large Caribbean island also have laws to prevent light pollution. Europe is among the most light-polluted continents on earth. Several national level public policies have been enacted to address this issue. The regional policy in Italy’s northern Lombardy region, national laws in Slovenia and France have come into force in recent years with the aim of decreasing the effect of outdoor lighting in parts of Europe and helping to preserve the veracity of the natural nocturnal darkness where it still exists.
The Balkan nation of Croatia has enacted national laws regarding light pollution in 2011 and 2015. Slovenia implemented the Slovene light pollution law on August 30, 2007. In the United Kingdom, Section 102 of the Clean Neighbourhoods and Environment Act, 2005 revises section 79 of the Environmental Protection Act, 1990 to comprise nuisance from artificial light. However, certain foundations are exempted from this legislation. These premises are utilized mostly for transportation and where high levels of light are essential for security and safety reasons. For instance, airports, railway premises, lighthouses, etc. A new legislation came into effect in France on the first day of 2019. It sets an important measure in western Europe for the protection of the nocturnal darkness by controlling the emission of artificial lights in outdoor spaces. The provisions of the law are generally consistent with guidelines for outdoor lighting that IDA has promoted for several years, regarding advances in lighting technology that enables effective lighting of outdoor spaces while minimizing the direct effects to the nocturnal environment.

THE URGENT NEED FOR LEGISLATION TO PREVENT LIGHT POLLUTION IN INDIA:

Although India has not yet reached the level of light pollution that has been seen in US and the European countries, however, the western regions of the Indo-Gangetic plains and the huge metropolitan regions are the brightest. The Thar Desert and the forested and somewhat less populated regions of India are among the limited regions in the country that still has unlighted skies. In West Bengal, Gujarat, and Tamil Nadu, outdoor brightness due to artificial lights increased from lower to higher levels over the last 20 years. Urban growth, industrial development, and air pollution have been the key players for escalating light pollution in these states. The loss of natural light due to extreme artificial light at night for India is three times faster than the global average as per a global study done in 2017. The municipal authorities of Mumbai and Mumbai Police have tried to administer some rules to prevent light pollution even in the absence of any legislation. For instance, the Brihanmumbai Municipal Corporation (BMC) ordered a hospital and gymkhanas along Marine Drive to switch off the high-intensity lights and billboards after 11 pm after receiving complaints from a Kalbadevi resident of Mumbai. Light pollution does not sound as alarming as soil, air, and water pollution that’s why people are unaware of this and there are no legislations or safety measures to prevent it in India.

Light pollution is an internationally recognised problem. An inclusive diversity of environmental ramifications of artificial light have been recognised due to light pollution. To control this pollution some efficient methods have been characterised such as the utilization of shielding on lighting fixture to avert direct skyward light especially at low angles above the horizon, evading the use of higher lighting levels than strictly required for the job, and limiting illumination to the region where it is required and clocking it.