Indian Constitution provided to all citizens of the country justice- social, economic, political, liberty of thought, expression, belief, faith and worship under the preamble; and equality of status and opportunity regardless of their caste, creed, status, religion, race, sex as per Article 15. But the gap which existed between the organized and unorganized sectors in our country remains to exist and it’s totally wide. 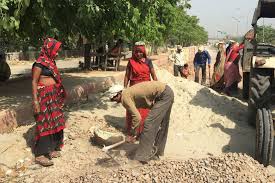 Unorganized sector and unorganized workers under the Unorganised Workers’ social insurance Act, 2008 -1
“Unorganised Sector means an enterprise owned by individuals or self- employed workers and engaged in production or sale of products or providing service of any kind whatsoever, and where the enterprise employs workers, the quantity of such workers is a smaller amount than ten.”

As per the report of the National Commission on Labour in 1969:-2
‘Unorganized workers’ are other groups of workers who don’t seem to be covered under the definition of the organized group of workers and which they’re such as-
• Casual nature of employment.
• Ignorance and illiteracy.
• Small size of establishment with the low capital invested per person employed.
• Scattered nature of establishments.
• Muscular strength of the employer operating either singly or together.
Unorganized workers mean:-
• Owned by individuals or;
• Self-employed worker or;
• Engaged in casual and production or sale of products providing any reasonable service and where any enterprise employs workers, the number of workers could be a smaller amount than ten.

Wages are simply a vital factor that anyone works. There’s the Minimum Wages Act that defines, The pay which must be paid to the employee by their employer, but the workers fail to get their minimum wages. The Supreme Court of India observed that employing workers at wage rates below the statutory wage levels is taken into consideration because the forced labor and is that the violation of Article 23 of the Indian Constitution.

No Knowledge about Hazardous work and lack of Occupational Safety-

The working conditions and lack of safety tools within the unorganized sector is that the main cause to possess an adverse effect on the health conditions of workers and workers suffer from various health issues. These health issues are mostly associated with respiratory because of inhalation of the dust or because of the uncomfortable posture they are going to have problems with Body ache.

No security of Job:-

The unorganized sector workers mostly add multiple jobs, undertaking multiple jobs could also be an indication of insecurity in jobs. Because one job or perhaps two might not generate enough income for livelihood. In India leader National Rural Workers Employment Guarantee Act, 2005 enacts to produce security working by guaranteeing a minimum of 100 days of labor within the foremost backward districts of the country who can perform manually.3

There is another issue with unorganized sectors that they have long hours of labor. If we see the agricultural sector, there are no fixed hours of labor because there aren’t any such laws or guidelines for the agricultural workers. Just in case of other unorganized sectors like matchmaking, fireworks, etc. Their timings of labor are very early within the morning at 6.00 a.m. and continue till late evening, so there isn’t any certainty of working hours. In the handloom sector, the work is organized in such the best way that wages were supported 12-15 hours of labor per day. As per The Factories Act, 1948, The Minimum Wages Act, 1948 aims that no adult worker shall be required to work quite 48 hours every week.4 But these provisions are violated frequently. Therefore, there isn’t any such limitation on working hours in unorganized sectors.

The unorganized sector workers had how the higher prevalence of poverty than their counterparts within the organized sector. Because they’re doing not have much income and uncertainty in their employment, during this caseworkers are unable to meet their basic needs of livelihood and other social responsibilities.

No Proper Physical Environment at Place of Work:-

Most of the provisions relating to the provident funds didn’t reach the event workers and contract laborers. The maturity or awareness could also be a serious concern of the workers within the unorganized sector workers. Agricultural workers and construction workers are feared by not having the ability to work during old age.

The Majority of migrant workers fall within the unorganized sector. No working hours are fixed. They belong to the poorest sections of the population and inadequate access to basic amenities. People who migrate from rural to urban areas have absolutely no rights once they arrive they lack bargaining power and are compelled to easily accept work for lesser wages.

Social security is extremely important for the welfare of the workers, it provides reasonable certainty. Social welfare measures have numerous benefits in promoting the workers, increasing the assembly level of the industry, and develop the feeling of surety among the workers. It had been also helpful for eradicating poverty to some extent. The Planning Commission constituted a committee on social welfare during the 12th Five Year Plan. In India out a whole workforce of 45.9 crores, 94% is within the unorganized sector, Ergo the 6% is within the organized sector.

The organized sector workers are comes under social welfare legislation like Miscellaneous Provisions Act, 1952, employee’s Provident Funds, and Employees State Insurance Act, 1948. The working committee of the designing Commission constituted a sub-committee in its first meeting to debate the issues. After taking various recommendations it’s hoped that it might be useful for the formulation of the twelfth five-year plan.

In the time of liberalisation, globalisation, and privatisation the country has seen a drastic change within the nature of employment and business environment. These changes created many problems within the perspective of social insurance. In this context, the issue of social welfare to the growing sector of unorganized workers draws more attention in emerging India. The govt. enacted much social insurance legislation for the welfare of unorganized workers also formulated many schemes. Unorganized Workers Social security Act, 2008 is one of the many activities which is exclusively for the protection of unorganized workers.

The National Social Security Board:-

As many problems are faced by unorganized workers like low wages, exploitation of workers, bad conditions of workers, etc. that the legislative system of India protects the rights of the unorganized workers with the assistance of varied articles covered under the constitution of India. The Government of India took a step by enacted a legislation ‘Unorganized social insurance Act, 2008’ for providing Social Security to the unorganized workers who add an unorganized sector. In pursuance of this Act, the govt of India has implemented numerous schemes like Aam Admi Bima Yojana (Life Insurance), adulthood pension scheme, Rashtriya Swasthya Bima Yojana (health insurance), etc. The Central Government, under the requisite section and therefore the government under the required section, are empowered to create the principles for the graceful functioning.