The follies that Indian Political System had imbibed since long was put on hold in the year 1985 when an infamous Haryana-MLA switched between two parties thrice a day in the year 1967. This incident was a highlight for the Parliament to finally, reach a saturation point and then enacted a proper law for such kind of defection. Currently, Indian Political system has a protecting gear to hinder such malpractices done by the legislators, yet the system fails to prevent such defection time and again. This evil practise still brings instability and continues to churn the political system of India. 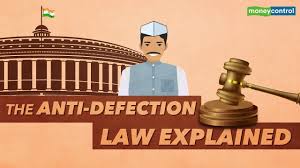 Anti-Defection Law was brought to deal with such members of the legislature who are easy prey for the other political parties to entice them to be able to prove majority in the House by offering them hefty amounts or on other promises. Such Defection has a perpetual existence amongst the legislators, what was being perceived only as a north Indian politics earlier has now spread all across the nation. Recently, the disregard of the electoral mandate has been seen in many states such as Rajasthan, Madhya Pradesh, Karnataka and Manipur.

The defection of Legislators long existed in the political system but an infamous case of 1967 led it to the introduction of a bill to enact an Anti-Defection Law by the Rajiv Gandhi government. There was a time in the 1960s when an infamous slogan “Aaya Ram, Gaya Ram” was originated due to the continues practice of defection by the legislators. One specific case of such malpractice was when a Haryana-MLA switched between the two parties i.e., Indian National Congress (INC) and United Front, three times within a day. This was the worst turmoil of the defection practice in Indian political history.

10th Schedule was inserted for the good of the Indian politics to curb the evil practice of detouring of legislator without any obligation to their own parties. Under the Anti- Defection Law a legislator can be disqualified from its original party on two grounds:
1) If a legislator voluntarily gives up the membership of the party he was associated with;
2) If a legislator acts against the direction of the party leader on a vote; meaning a legislator cannot disobey the party if he chooses to do so he shall be disqualified from the membership.
This law applies to both the Houses i.e. Parliament and State Assemblies.

There is an exception under Schedule 10 of the Constitution of India to protect the members from the disqualification of the membership of the party. Initially, if a party decides to merge with another party with one-third of its members then neither the members to decide to merge with another party get disqualified nor the legislator who decides to stay with the original party, both shall be immune from the disqualification. This exception led to another problem that parties started to use this split of one-third member formula unfairly.

Supreme Court also held that judiciary will only intervene once the order is passed from the presiding officer on the disqualification issue, not before that.
Supreme Court also clarifies that Paragraph 2 of Schedule 10 does not violate the freedom of speech and expression of the elected members under Article 105 and 194.

Position of the Members

At present, the misuse of the Anti-Defected law is much as if it is an avenue to be defected and not get disqualified rather the opposite. This evil practice is being justified by naming it political strategies. The continuous practice of the defection has stooped down the level of Indian Politics. Earlier this practice was sluggish but today it has paced up a lot, it has almost become a dominos, one state following the footstep of other of this evil practice of defection. MLAs have completely disregarded the democratic mandate and sell it like their own property.

The lacunae in the Anti-Defection Law are wide that gives straight and an easy avenue to the members who intend to make the mockery out of the law. Not only the members but the presiding officers also take advantage of the loopholes of the law.

Position of the Speaker

The Speaker or the Presiding Officer plays an important role as a sole decider of the defected members. The position of a Speaker is sine qua non in the Anti-Defection Law. The structural position of a Speaker is not unbiased, since the Speaker belongs to either of the parties present in the House. The Presiding Officer’s stance in a disqualification petition gets influenced by the party he belongs to.

The power of the presiding officer has been addressed before by the Supreme Court in Jagjit Singh v. State of Haryana & Ors (2006)[4] where the Apex Court highlighted the issue regarding the stance of the presiding Officer not being neutral. Again in the recent case of Manipur[5] Apex Court also suggested a few solutions to the concerning absolute power of the Presiding Officer and its unfair use.

India is a large democracy and the members of the Houses and Legislative Assemblies represent the people of their constituency through the electoral mandate. For the personal and political gain, the political parties pan out the evil practice of defection. Despite the bar on the defection it has now deeply inculcated in the political system to acquire the prime seat of the States or the Country.

The Anti-Defection Law must be reviewed by the Parliament and the lacunae are needed to be fixed. Indian Constitution reads the Separation of Power in its Preamble but the absolute Separation of Power is not exercised in the Nation unlike the United States of America. Today the Anti-Defection Law is in dire need of the Parliament and Judiciary to come together to make amendments as required and enforce the same to curtail the common practice of defection.