NGO activities include, but are not limited to, environmental, social, advocacy and human rights work. They work to promote social or political change on a broad scale or very locally. NGOs play a critical part in developing society, improving communities, and promoting citizen participation. NGOs reach people where the government fails. 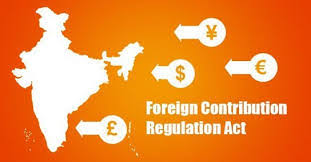 Even the SC did not fail to recognize the contributions of NGOs during the lockdown by observing “Non-governmental organisations coming forward to help the migrant workers and to fight the pandemic and extend help by providing food, water and transportation at their cost which deserves all appreciation”. But, the ability of NGOs to work for the poor and marginalized will be curtailed by the new amendment to The Foreign Contribution Regulation Act. This article will the analyze the new amendment and how it will affect the functioning of NGOs.

How important are Non-Governmental Organisations (NGOs)

NGOs are organisations that reach out to people who don’t have the resources to live a comfortable life. NGOs operate in a lot of field, for example, healthcare, education, livelihood support, water, sanitation, disaster management, food distribution etc. Besides these they also provide vital services. They work for citizen engagement, help build networks and combat corruption in government. Civil society also gave us something very important, The Right to Information Act. They do a lot of field work and research and help provide information, which helps in the policy making decisions. Basically, NGOs operate where for-profit companies don’t.

Before we deal with the amendments, it is important to look at the origins and the history of FCRA, which will help us to get a clear picture of the Act. The original FCRA was passed in 1976 by the Indira Gandhi-led government during the Emergency[i]. It prohibited electoral candidates, political parties, judges, MPs and cartoonists from accepting foreign contributions. The intent was to curb dissent but the justification given even at that time was the same, namely, to curb foreign interference in domestic politics. The Act was further tightened when a new amendment was introduced in the year 2011. This time the focus was on “organisations of a Political Nature”. In the year 2010, the UN Special Rapporteur on the Rights to Freedom of Peaceful Assembly and of Association undertook a legal analysis and submitted a note to the Government stating that the FCRA provisions and rules “are not in conformity with international law, principles and standards”. It further stated that restrictions in the name of “public interest” and “economic” fail the test of “legitimate restrictions”. The Government ignored the report and no changes were made to the act. Now the current government has taken those restrictions and has made them even more strict.

There is no doubt that NGOs play a very important part in our society. They basically do the job which the government is supposed to do. They played a very important role during the pandemic. From providing PPE kits to hospitals to food to the migrant workers, they played a vital role. They do a lot of research work and provide information to the government based on which the government takes policy decisions. All these work requires money and as the name suggests they don’t receive money from the government. NGOs have donors in countries all over the world. As of 2016 there were 33 lakh NGOs operating in India, out of which 22,000 were registered under the FCRA. The NGOs which receive the foreign funding donate the money to smaller NGOs which don’t have the resources. There are a lot of changes made to the act but this article will focus only on the most contentious changes introduced.

1. The first major amendment has been made to Section 7 of the Act. Earlier, the NGOs receiving foreign funding could transfer money to smaller NGOs which did not have the resources to carry out their work. This was important because it helped the NGOs to focus on a particular issue in a particular part of the country as these smaller NGOs were better equipped in dealing with the local issues and is tailored to deal with the local problems. This will result in the closing down of a lot of smaller NGOs which work for the most marginalized.

2. As per clause (b) of Section 8 of the previous act, any NGO could defray up to 50% of the total foreign fund received for administrative expenses. The new amendment has reduced that cap to 25% of the total funding received. 25% is not enough for administrative expenses as they have to pay for salaries, internal training, equipment, office rent, and fee for hiring the top lawyers as they are always battling some sort of case. Due to the new cap the NGOs would not be able to carry out their administrative work, which will cripple them.

3. As per Section 13 of the principal act, pending further inquiry, if the government is satisfied that there is enough evidence, could suspend the license for no more than 180. The new amendment has increased this duration.

4. The Principal act allowed NGOs to receive funds in any bank, but as per the new amendment to Section 17, all the NGOs will have a create a bank account in a designated New Delhi branch of Bank Of India where they will receive the funding and they can transfer it to their account from there. Furthermore, the interest that they receive from the banks would also be counted in the administrative expense; hence, the cap of 25% will apply to it too.[ii]

No government makes a bad act better, they only make it worse. The Act was introduced to crush political dissent, and successive governments have made it more stringent and used it for their own benefit. The current government has only followed the trend and has taken it to the next level. They are ensuring that there is less public awareness, less scrutiny on themselves and just leaving a large number of vulnerable people in the lurch.