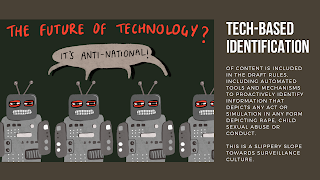 In the recent days, the emerging issue instituted due to non-compliance of the newly enacted IT Rules, 2021 passed the Ministry of Electronics and information technology, by the major social media platform created a tensed atmosphere in the country. The IT Rules majorly focused on the traceability of the first originator and censorship on the material which do not comply with the provision of the statute. On non-compliance, the govt can took legal action against the social media intermediaries and can also led to the embargoed of certain platforms. Many intermediaries raised the issue regarding the irregularity between the new statute and the fundamental rights given by the constitution.

The IT Rules, 2021 enacted in order to regulate the functioning of social media portals, publishers , OTT ( Over-the-top) and social media intermediaries .Social media Intermediaries are defined under the section 2 (w) of IT Rules ,2021[i]as intermediary which primarily or solely enables onlineinteraction between two or more users and allows them to create, upload, share, disseminate,modify or access information using its services. As the government stringent the rules, there have been concern about the dilution of the safe harbor provision in IT Rules. Safe harbor means immunity, which is provided to the social media intermediaries, in case any content transmitted over their platform would violates the local laws.  This immunity provided is an advantageous opportunity to these social media platformsas several jurisdiction including India or any other country recognize them as a mere conduit that shouldn’t be held accountable for the content. In this digital economy, many countries are focused to check the spread of misinformation, hate speeches and any material which would target the sovereignty and integrity, require social media platforms to fulfill certain condition to enjoy safe harbor.  The spreading of falsity due to ignorance of social media platform led to the stringent IT rules all over the world. India has substantially broadened the ambit by introducing new rules under section Sections 69A(2), 79(2)(c)and 87of the Information Technology Act, 2000. The new rules effectively

·         Purpose to offer a sturdy grievance mechanism for the customers of social media and over-the-top (OTT) structures to deal with their grievances.

·         They vicinity unique emphasis at the safety of women and kids from sexual offences on social media.

·         The guidelines pressure the factor that on-line content material publishers and social media intermediaries must comply with the Constitution of the country and concern themselves to local laws.

·         With those guidelines, India joins different worldwide regimes which have provisions for digital media law and gives a complete mechanism for the safety of digital media consumers.

As the new rules that were enacted seems to be contrasting with the privacy policy that were provided by these social media platforms, it created a huge hindrance in the digital world. Social media platforms being a mere transmission channel with a provision of privacy providesecrecy with the information being transmitted and from whom it is being transmitted. It contradicts the new rules which demands the traceability of the content creator and censorship of any material which could harm the sovereignty and integrity of the country.

Many social media platform like WhatsApp ,  provide end-to-end encryption to their users in order to maintain their privacy by concealing the transmitted data but Rule 4 (2) [ii]provide authoritative right to law enforcement agencies to demand break-down of End-to-End encryption in order to trace the First originator. The corresponding communication between the social media communities are personal, imposing such a rule compromise privacy of their users. The enforceability of suchrule could curb their right to privacy provided under Article 21 and enable massive surveillance to meticulously control people’s action.

The right to privacy which was upheld in the case of Puttuswamy vs Union of India [iii]stated that Right to Privacy is an inherent and integral part of Part III of the Constitution that guarantees fundamental rights. It is also considered as one of the basic human rights and the same is explicitly stated under Article 12 of the 1948 Universal Declaration of Human Rights:[iv]

“No one shall be subjected to arbitrary interference with his privacy, family, home or correspondence, nor to attacks upon his honor and reputation. Everyone has the right to the protection of the law against such interference or attacks.”

Right to freedom of Speech and expression

The enacted rule also imposes a user verification process on social media intermediaries that needs identity proof like Aadhar which discloses the identity and completely removes the possibility of anonymus users to share their views which could curb their right to freedom of speech and has an effect making a major section of people voiceless .  This rule can majorly affect the people with different or dissent opinion on the issue as it can be immediately identified and can be easily removed from the search engine. Not long ago, we have seen this major breach of data through Aadhaarand other corporate which shook the fictious world of many as extensive information were leaked.

The Rule 5[v]of the new act provided the digital media regulation in which it clearly states that the news website and portal which do not comply with orders given by the law enforcement agencies, would be takedown with immediate effect. The provision can massively censor the information which differ from their perspective and can be used as a threat to curb the dissent opinion. This biased provision violates the fundamental right to freedom of speech and expression which also include freedom of press.In the case of Indian Express Newspaper v. Union of India,[vi]it was held that the press plays an important role in the democracy machinery. The courts have a duty to uphold the freedom of the press and invalidate all laws and administrative actions that would take that freedom.

Non-compliance with the new rule initiated a war between social media platform and the government which led to the involvement of judicial authority. As some of them requested to extend the compliance period amid pandemic situation, some knock the door of courts explaining their privacy policy and infringement of fundamental rights which were guaranteed under Constitution of India. They also cited Article 12 of UDHR while explaining violation of human rights.

The present situation may likely to bring a massive change in digital economy. The new rules brought up two things i.e. surveillance and censorship. This traceability of first originator, collection of data,removal of distinct opinion deteriorating the sanctity of Constitution of India by violating the fundamental right of its citizen. The world’s largest democracy which fails to accommodate its own citizen by crushing their dissenting opinion. As the autocratic ruling has selectively arrested the citizens for their social media posts, this act comes as a handy tool for provocating legal action on people that are not in the interest of ruling government. The arbitrary formulation of this act gives the law enforcement agencies a draconian control to intimidate and defacement of intermediaries that don’t work in the interests of ruling government.