The issue of war and peace has always been a focal issue in all the periods of history as well as relation, be it in between two individuals or nations. Even after knowing that ‘peace’ is a matter of great concern for humankind and is very necessary to live together in a society, nations didn’t give much importance to it and ignored the same. 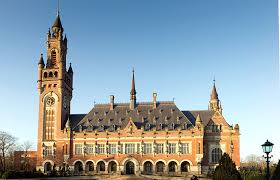 The supreme importance of the virtue of peace that was not realized by the nation over a century was realized by them in the first half of the 20th Century when they witnessed the blood shred of humanity scattered on the grounds of Hiroshima and Nagasaki, crying for the establishment of peace in the world. Such circumstances resulted in the foundation of the United Nations whose objective is to maintain international peace and security. To achieve this end, the UN has been developing means to safeguard International peace and settlement of disputes.

International Court of Justice (ICJ) represents the last rung in the ladder of dispute settlement methods which came into effect in 1945 after the failure of judicial remedies like inquiry, negotiation, and mediation.

The creation of PCIJ was the outcome of the two Hague Peace Conferences which were organized in the years 1899 and 1907 respectively. Since people felt the need of improving the rules and bodies governing the arbitral proceedings, in the 2nd Hague conference, some fundamental ideas were enshrined that served as a source of inspiration for drafting the statute of the Permanent Court of International Justice. Under a mandate of article-14 of the covenant of the League of Nations, a concrete shape was given to the idea of a permanent Court of Justice, which would be competent to hear and determine any international disputes as well as to give an advisory opinion upon any dispute or question of the council of Assembly of the League of Nations. The Permanent Court was established with 15 judges elected by the assembly and the council of the League of Nations. During its period of working, this court dealt with 29 contentious cases and gave 27 advisory opinions.

The gradual declinations in the level of activity of PCIJ and the serious consequences of the 2nd world war enabled the countries to reconsider the further working of PCIJ. In different instances, different countries showed their interest in the re-establishment of an international court. Taking a view at the opinions of different countries in April 1945, a meeting was organized in Washington, comprising of 44 states to prepare a draft statute for the creation of future International Court of Justice. However, the final decision for the dissolution of PCIJ and creation of ICJ was taken in the conference held in San Francisco. Since the decision of creation of a new court involved the dissolution of its predecessor, the PCIJ that had come into existence in the year 1922, ceased functioning in the year 1940 and finally got dissolved in April 1946.

THE INTERNATIONAL COURT OF JUSTICE

ICJ, the successor of the Permanent Court of International Justice, came up as a principal judicial organ of the United Nations. With the gradual failure of the effectiveness in working of PCIJ, it became necessary to establish a court, which could attend the end of International law. ICJ was established on 26th June 1945 by the UN charter. Bing the only judicial organ having the potential of having both general and universal jurisdiction, the ICJ is often regarded as the “World Court”.

§ The International Court of Justice comprises of 15 judges who are elected for a tenure of 9 years, and each judge must mandatorily belong to different nations, not to the same. Or else they shall not be elected. However, out of 15 judges, 5 of them get retired after every 3 years. Thus elections are held every 3 years for filling the 5 vacancies of the court.

QUALIFICATIONS FOR BEING ELECTED AS A JUDGE

a. Persons must be of high moral character
b. They must be independent
c. Must possess the qualifications required in their respective countries for being appointed to the highest judicial offices or jurisconsults of recognized competence in International Law[i].
§ Not only judges but also there are presidents and vice presidents of the court who is elected for a tenure of 3 years. In the situations where the president is absent or is not entitled to the presidency, the vice-president, so appointed acts on his behalf.
§ The ICJ also comprises of a registry that is headed by a registrar.
§ The election of all these members is held both in the General Assembly as well as the Security Council, each voting independently of the other. A candidate must obtain an absolute majority in both the forums in order to get elected as a judge or the president or the vice president of the court.
§ The court is at liberty to establish chambers comprising of three or more judges in order to settle an international dispute. The provision for the appointment of Ad-hoc judges has been there in ICJ. The basic aim for choosing an Ad-hoc judge was for the maintenance of equality in the status of parties. In the situations where the nationality of one of the parties to a case is similar to the nationality of one of the judges presiding the case, in order to ensure the serving of an unbiased justice, the opposing parties to the case are given an option to choose an additional judge, which must belong to its nationality. As per article-31 of the statute, these Ad-hoc judges are entitled to the same rights and duties as the members of the court for the duration of the proceeding.
§ In a case supposed to be settled in the ICJ, the bench of the court that will deal with the case is constituted of all judges, including the Ad-hoc judges too. The judges of ICJ have an obligation to do the following:
a. No judge should engage in any political or administrative functions or in any occupation of a professional nature (Article 16 of the Statute).
b. No judge may participate in a case brought before the court in which he/she has been previously involved as an agent or counsel for one of the parties, as a member of a commission of inquiry, or as a member of a national or international tribunal or arbitration.

JURISDICTION OF THE COURT

Advisory jurisdiction is concerned with answering questions that have been referred to the court by the General Assembly, Security Council or other organs and specialized agencies of the United Nations. However, the advisory opinions given by the International Court of Justice are not binding[ii]. The Advisory procedure of the court is open solely to International Organizations. At present, only 5 organs of UN and 16 agencies of the UN family are authorized to request advisory opinions to ICJ.

Many scholars have been referring to ICJ as the least effective body of the UN. They are of the view that it is all because of the flawed jurisdictional architecture of ICJ, which is based on the consent of the parties. The rejection of ICJ’s opinion on the wall of Palestine, the ignorance of the firm judgment given by ICJ against the USA ruling out the military interventions in Nicaragua[iii] that was contrary to International law are a clear indication of the fact that- ICJ is an ineffective player in achieving International peace and security.

It can’t be denied that the World court will always remain a vital tool in resolving disputes in spite of having a limited scope but at the same time, it is time to accept that International Institutions have been plagued by too many expectations. To allow ICJ to reach the expectations, it is to be conferred with greater power and its scope must be widened, so that no more it would be criticized, ignored, and will always continue to be the ‘World Court’ with supreme power.

[i] Although no specific quota to different regions of the world is assigned, so far the practice has been
to elect one judge from each of the States which are Permanent Members of the Security Council, three judges from Asia, three judges from Africa, two judges from Latin America and one judge each from Western Europe and other States and from the Eastern European States.
[ii] Since 1946 the Court has given 24 Advisory Opinions, concerning, inter alia, the admission to United Nations membership, reparation for injuries suffered in the service of the United Nations, the territorial status of South-West Africa (Namibia) and Western Sahara, judgments rendered by
international administrative tribunals, expenses of certain United Nations operations, the applicability
of the United Nations Headquarters Agreement, the status of human rights rapporteurs, and the legality of the threat or use of nuclear weapons. See the general information concerning the
International Court of Justice, of 25 October 2002 (www.icj-cij.org) Also see, D. Pratap (1972).
[iii] The Republic of Nicaragua v. The United States of America
Image Source
Author: Srestha Das, student of University Law College, Bhubaneswar, Odisha.