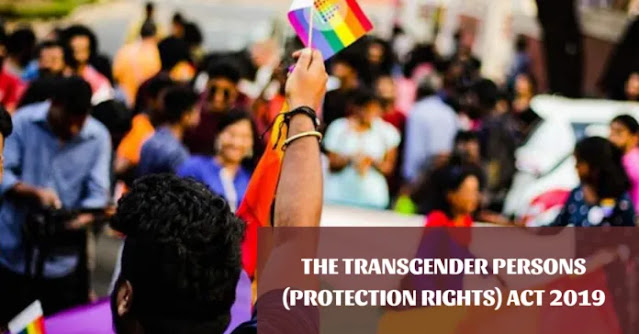 “Sexual Orientation is natural. Discrimination on the basis of sexual orientation is violation of freedom of speech and expression”

-Supreme Court of India in Navtej Singh Johar vs. Union of India

According the Census 2011, 0.4% of the population accounts for Third Gender, however the real figure might be different due to fear of social stigma.Historically, members of the Transgender community have faced oppression and stigmatization in our country. As per reports of NHRC, only 2% of trans individuals live in family. In regard to education, reports states that about 15% were harassed by their teachers and 52% by their peers which leads to discontinuation of the education. Trans individuals are also excluded from economic activity, Report states that 92% of individuals were denied of jobs being completely educated due to their gender solely. After the rigorous protests and activism by various social organizations. The much-awaited legislation in respect of transgenders was enacted namely, Transgender Persons(Protection of Rights) Act, 2019 and the rules framed within. The TPPR Act is a milestone for India it plays a vital role in defining and guiding rights of transgender community and obligations of various stakeholders. The Act has been enacted on the footsteps of the NALSA Judgement where the Supreme Court conceded the fact that Indian laws function in a binary i.e.; male and female and it recognized the Transgender individuals as distinct from the two and gave the name as “THIRD GENDER” under the Constitution. The Apex Court while doing so upheld their Right to privacy by stating that these persons need not go under any examination or biological test. “Sexual Orientation is an essential attribute of privacy. Discrimination against an individual on the basis of sexual orientation is deeply offensive to dignity and self-worth of the individual. The right to privacy and protection of sexual orientation lie at the core of the fundamental rights guaranteed under Article 14,15, and 21 of the Constitution”[i]. All fundamental rights available to every citizen under Part III of the Constitution are available to them as well and quoted that – “Everyone has Right to Life. No one shall be arbitrarily deprived of life, including by reference to considerations of sexual orientation or gender identity.” Various directions were given by the court to respective state governments to develop proper mechanism to realize the rights of the transgender persons by developing social welfare schemes, recognizing them as “socially and educationally backward class of citizens”, public awareness programs to tackle the stigma and provisions for legal recognition of the “third gender”.

Key Features of the Law:

1.      Scope of “Establishment”-In its wide ambit includes any company, association, firm, cooperative, trust agency or institution and there is no requirement of minimum number of employees.

2.      “Transgender Person” – Include all the people whose gender does not conform or match gender assigned to them at birth. Includes both trans-man and trans woman (whether or not they have gone under Sex-reassignment surgery or any therapy) Also, it includes socio-cultural identities such as “kinner”, “hijra”, “aravani” and “jogta”.

3.      Non-Discrimination of Transgenders in terms of Employment- All people and organizations’ have a duty to ensure that transgender persons are not discriminated or unfairly treated in employment matters such as recruitment, promotion etc. A transgender person cannot be terminated just on account of being a transgender.

4.      Non-Discrimination of Transgenders in terms of Access to Education, Healthcare and services for public- It marks the prohibition from denying, discontinuing, or treating a transgender unfairly in respect of access to and enjoyment of any goods, services or privilege that is meant for public purposes.

5.      Penalties to Employer for Non- Compliance of Law- Anyone in violation of the provisions of the TPPR Act, 2019 can be imprisoned for minimum of 6 months which may extend up to 2 years and with fine.

Obligations created by Law for Employers:

2.      Make structural and infrastructural changes in establishment to make friendly environment. Provisions related to gender neutral restrooms, hygiene products and provision of other health services that employee with intersex variation might need.

3.      Reviewing the Anti-Harassment Policiesformulated by them in the spirit of the TPPR Act, 2019 to ensure that transgenders are not subjected to any kind of Sexual Harassment. It imposes duty upon the employer to keep code of conduct in check.

4.      Appointment of a Complaints Officer and have a grievance redressal mechanism. Details of the complaints officer shall be displayed on the website or on conspicuous places of office premise.

5.      Conduct awareness/sensitization programs for employees for the purpose of Nuances of the law and penalties under it. To ensure this organizations can have workshops, seminars and talk related to the diversity and inclusion.

It is peculiar to take note that Employers should not see the Compliance thorough narrow lens of just evading with the Penalties and legal consequences. Rather, true spirit of law should be realized and hence ensured.

The Judiciary is the Guardian of Constitution it can always guide us about what path to follow but the implementation is always left open at our end and it has long way to.Key initiatives are required from our side to bring a full stop to the social stigma such as changing our mindset and stop seeing transgenders as someone different from you on an individual level. Companies can also take up various practices such gender-neutral dress codes, gender neutral restrooms, security guards round the clock, well-li complex which even include transportation and parking spaces.

As quoted in the NALSA Judgement- “Members of LGBT Community and their family members owe an apology from society for being denied equal rights over the years”[ii]and now is the time we should pledge to not to repeat the mistakes done in past and take corrective measures to witness diversity in workplaces and transgender at Economic front as well.

1 thought on “Insight to Transgender Persons (Protection of Rights) Act, 2019”