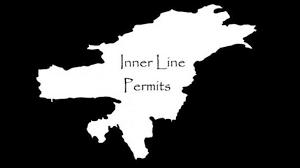 The Inner Line Permit is a document that approves Indian citizens to temporarily stay in an area that comes under ILP system i.e. Arunachal Pradesh, Manipur, Nagaland and Mizoram. The ILP document are accessible both online and offline they are issued by the concerned state government.

In Ladakh, ILP was eliminated in 2014 to boost tourism however, it was imposed again in 2017 to curb the incursion of outsider nonetheless, there are few places in Ladakh which are accessible without ILP: Zanskar Valley, Suru Valley, Srinagar Leh highway, Manali Leh highway, Sightseeing in Leh city.[1]

The permit system can be traced back in 1873; the British conquered Assam in the Anglo Burmese War of 1824-26. The introduction of Bengal Eastern Frontier Regulation also known as the Inner Line Regulation in 1873 was the first administrative policy of the British in the North East, the reason for such regulation was to protect the Crown’s (commercial) interests, by restricting the entries of “British subjects” (Indians) from trading with these regions. After Independence in 1950 the Indian Government changed “British subjects” with “Citizen of India” and maintained the ILP System to safeguard the primitive interest of tribal communities in the Northeast.[2]

The contemporary struggle for ILP was demanded by the Meiteis. The Meiteis tribe dominate around Imphal Valley which is also inhabited by Naga tribe Rongmei and Tanghkul. As a volatile people Meiteis enjoy the cordial relationship with them. But the recent demand of Greater Nagalim, or the consolidation of all Naga-inhabited areas has become the incessant bramble in this relationship. Also the Kuki ethnic group are trying to parade for their own campaign for an independent Kuki homeland. The large part of Imphal Valley, the Meiteis traditional land and livelihoods are taken over by the Foreigners from Bangladesh, Nepal and Burma. Because of such situation and proliferate conflict the Meiteis fear being eventually outnumbered in their own land.

Thus, ILP was seen as a last resort against the “invasion” from the outsiders. After a long political struggle on 1st January 2020 the Inner Line Permit comes in to effect in Manipur making it the fourth North-Eastern state to come under this regime after Nagaland, Mizoram and Arunachal Pradesh. The COCOMI i.e. Coordinating Committee on Manipur Integrity welcomed the state being covered under the ILP, the spokesperson of this committee stated that though ILP is not a complete solution to curb the incursion of immigrants, but it will tackle the issue in some ways.[3]

1. Special Category Permit: It is issued for three years for special category people. The permit is subject to renewal with defined fees.

2. Regular Permit: It is issued for six months for the people who visit the state frequently subject to sponsor by permanent resident; renewal is allowed with fees of Rs.1000

3. Temporary permit: It will be issued for 15 days to those who visit for a short period, the renewal is permitted for Rs 200.

4. Labour Permit: It is issued to the labourers for a maximum period of six months and could be extended for another six months.

The central paramilitary forces and armed forces and families, all executive members of recognised national and state political parties and students holding a valid ID card of educational institutions in Manipur are exempted from ILP.

The Citizenship (Amendment) Bill was passed on December 11, 2019 by Rajya Sabha with 125 votes in favour of it, on December 12, 2019 President Ram Nath Kovind gave his assent on the bill. The CAA is the amendment of the Citizenship Act, 1955. This act allows Indian citizenship to migrant, who has entered India by 31st December, 2014. Minority religion i.e. Hindu, Sikh, Buddhist, Jain, Parsi, and Christian who has fled from Muslim Majority Country due to pious affliction will be given expedite Indian citizenship in six years. The amendment has also relaxed the naturalization requirement from eleven years to six years to these migrants.

The Act has been exempted in the areas which come under Inner Line Permit (ILP) regulations and also the areas that come under Sixth schedule.

Ramification of CAA on ILP regime

There was a huge antagonism by North-Eastern residents against CAB (Citizenship Amendment Bill) on grounds that if CAB is implemented then as a border state of Bangladesh there will be huge incursion of illegal immigrants in their homeland and also the illegal immigrants who are already residing will get the citizenship under this act which consequently will be threat to their linguistic and cultural identities. After the assent to the Bill by the President, the exemption was given to ILP and sixth schedule states from CAA which implies that the presence of already established numerous restrictions and regulations on entry and stay of outsider, will be expected to put the same constraint on immigrant who has acquired citizenship through CAB. The exemption also implies that already residing immigrant who is non-citizen would not be assigned as an Indian citizen through CAB i.e. no Bangladeshi will be allowed to settle in any ILP states under CAB.

The Outcry for ILP North-Eastern states after passing of CAB

Even when the exemptions are provided under CAA for sixth schedule and ILP states, the outcry for ILP is still in demand the only North Eastern states to be devoid of ILP are Assam, Tripura and Meghalaya and some parts of Sikkim. The residents of these states had defended that the North Eastern states are more vulnerable to illegal immigrants, by being the border state of Bangladesh.

The youth organization of Assam had claimed that if the Government is so concerned about safeguards of indigenous people of Assam it should implement Inner Line Permit.

The Chief Minister of Meghalaya and also other organization head of Sikkim and Tripura had put forth the demand of ILP to the Home Minister of India concerning the protection of their communities from outsiders.[4]

THE INFERENCE OF INNER LINE PERMIT.

The Inner Line Permit system was made to constraint the influx of immigrants in order to protect the customs and traditional system of tribals. Though the ILP has helped the tribals in many ways but it still have some drawbacks.

· Hundreds of small traders from neighbouring states are depended upon the employment in these states to maintain their livelihood e.g. coal fields in Meghalaya. These labourers face many difficulties for being an outsider as for small issues the curfews are imposed by the residents against them, like “Bhai curfew” in Mizoram.

· India is known for its unification however due to such system it is embarrassing for the citizen to be considered as an outsider in their own country especially when the curfews are being held against them. Though ILP is important in these areas as they are the border state to few countries, and have experienced ill treatment from intruders of those neighbouring countries. But few relaxations are needed for the citizen of India particularly for the labourers whose subsistence is depended on these states.

· The demand of ILP in other North Eastern states will also increase the unemployment level; it will affect the labourers of tea sector and oil sector adversely.

· The people who had to travel by road to neighbouring states or other parts of the country had to pass through the states affected by ILP subsequently it becomes difficult for them to get ILP every time they travel.[5]

· ILP has not affected tourism adversely, the states are doing well in Tourism Industry despite ILP, however the same cannot be said about trade and commerce.

· ILP came into existence to curb the invaders from settling into these states, but influx is a complex issue and it cannot be solved instantly because the movement of people from one place to another in search of food and shelter is the history of human being and no one can stop this process abruptly.[6]