The current Covid-19 breakdown has spread all over the world and has changed many things. Issues like sexual assault and domestic violence against women have come up all over the world in quarantine time, which has always been victimized. According to the data, one in three women has suffered from domestic violence in this outbreak which is also a Human rights violation. 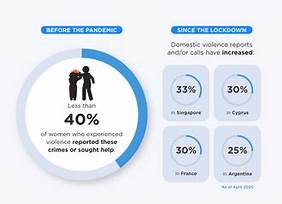 India has been under 9 month’s lockdown which started on 24th March. Due to covid-19 has been announced by the prime minister the country is almost the middle of the entire lockdown process. There are many challenges as far as the entire lockdown process in the country is concerned. There is another horrifying aspect of this lockdown which has now immerged which reports the domestic violence against women there has been a sharp increase in the number of cases According to the National Commission for Women which said about more than 1,000 domestic violence complaints in between the month of March 25 and April 22, 2020.

Now, this in comparison to normal circumstances is a sharp increase. The National Commission of Women in fact that they attribute that many of these cases could be as a result because of frustration which is setting in especially among men those who are sitting at their houses was not able to go out to their work to other activities which in turn is being taken out on the women in their houses a very disturbing scene as far as the rising number of domestic violence cases is concern complaints.

In the lockdown, women are not been able to reach the police and they don’t want to go to the police because they are afraid that if a husband comes out from the police station after a day or two again he will torture and she can’t even move out. Now the big worry for the National Commission of Women is that many of the women especially in the urban-rural kind of setting they don’t know how to operate emails or send a message to save themselves as a complaint auto seek help most of these women right and with the Indian post also getting affected the railways are not working the flights are not, in fact, taking the post from one place to another. Many of these women from the rural setting specially used to write and send letters to the NCW as complaints that are not coming in. And that could also be one reason that they are not getting the larger picture across the country but these worrying phenomena as a worrying trend is not only been reported from India it has now become a global problem.

According to the media reports to online services and domestic violence cases in the United States have significantly increased while the gender-based cases have doubled in India during the first week of the restricted movement. There are cases of increase in the number of women not only being assaulted physically but also being murdered in Turkey many of these have recently 90,000 gender-based violence cases have also been reported from South Africa in the United Kingdom the National Domestic Abuse helpline has seen at 25% increase in the closed now in Australian government has also reported a 75% increase in online searches for support on domestic violence in France, in fact, the French minister has gone on record and given a statement that domestic violence rose 32% across France and 36 present in Paris alone in the first week of the nation by lockdown that was announced in France to fight the Coronavirus meanwhile this has been acknowledged at the highest level.

UN secretary-general Antonio Gutierrez opined on this matter that the dangers of a horrifying trend of increase in the number of cases of domestic abuse and violence against women and is called upon all the countries to react also act on base on urgent basis. During the covid-19 pandemic the common directive from everyone is to stay home stay safe but for several women staying home does not equal safety many unfortunately trap their abusers with nowhere to go.

Also, India is one of the 36 countries in the world that has still not criminalized marital rape. Women gradually after tolerating all this for a long time they spoke to her parents and also told they’re in laws but then somehow there was thus pressure from the family that since she is a woman and they will have to bear it all and should keep up with his wishes. Uncertain future because of lack of opportunities for them Even if they decide to leave their abusive household and if they have children it becomes more impossible for them even to think about leaving their abusive husband. There is a reason why divorce is still considered taboo in India and to make matters worse in lockdown there is an increase in unemployment sources of income have totally gone down, millions of people have been pushed–up in poverty. They are hungry and suffering immensely in this pandemic because of this the level of frustration, anger, impatience, and also desperation increases, and who gets all this anger on the most vulnerable members of the family. They face all forms of physical, mental, and sexual abuse.

In the recent case in Ahmadabad, a 36-year-old woman from Vejalpur filed a complaint regarding domestic or sexual abuse at the police station. Further, she also stated that her husband hid the facts that he has Sexual Transmitted Disease (STD) called herbs and he infected her also in this lockdown period. When she tried to know and ask the doctors, her in-law’s assault and deserted her. However, she also stated in her statement that she married him in 2017, a resident of Manekbaug. Also within a month of marriage, it was disclosed by her that her husband is an alcoholic also has a relationship with other women. When the lockdown period starts in March it was observed by her that her husband applies some powder on her body and taking medicines and also saw a sore on his body. In a month she found a similar sore on her own body. Finally, she consulted a doctor in the month of November and found that she is suffering from herbs which are Sexual Transmitted Disease (STD). And when she raises the issues her in-laws beat her and left her at her parent’s place[1].

Lastly, I conclude that not all men are bad but those men who abuse their wives daughters sisters, or any woman or a man for that matter need to know that they cannot go on doing this forever and that they will be severely punished and for those men who say they are not bad it’s time they stood up and help to bring an end to this culture of violence and abuse because of we all bracing for the new normal in this post-Corona virus world we really need to rethink about how we treat and look at all the genders.