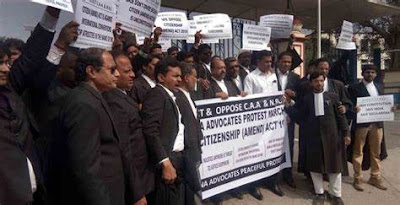 Prevention of strikes by the advocates:

Lawyers going on strikes to get their demands fulfilled is an increasingly wide trend these days. Thus, the frequency of these strikes and protests from over different parts of India is leading to a huge impediment to our judicial system, as it is adding to the already large burden of the pendency of cases.

As laid down in, Salamat Ali v. State, 2014 [1]…the Bar exists for the purpose of ensuring access to and delivery of justice. The Bar is also meant to stand up for upholding the rule of law. But the Bar can discharge these functions only if its members abide by their code of conduct and are subjected, like everyone else, to the rule of law.”

Members of the Bar, must conduct themselves in such a way that the general public has confidence in the legal profession. As attorneys go on strike and their representatives prevent them from appearing in court, the system loses and the noble task of administering justice is hampered. Therefore, it is the need of the hour to come up with such provisions which prevent the advocates to go on strikes during court working hours, so that there’s no hindrance in providing justice. Moreover, provisions of punishment should also be introduced if such a conduct is not followed, in order to prevent strikes and consequentially the burden on our courts.

Graver penalty and punishment in case of illegal practice of advocacy:

When any person illegally practices in any court or practices in a court in which he isn’t entitled to, in that case, the person should be entitled to much graver punishment, rather than only imprisonment for a term. In order to deter this illegal practice, where people get affected and are being compromised with their rights of having a proper representative, a specific amount of fine should be imposed and a longer prison term should be set up – which would provide a lot of deterrence to people who illegally sought to make money. This improvisation in section 45 would actually decrease the number of cases registered in this regard and thus, would enforce proper ethics in the courts.

Prevention of inaction due to pendency of cases:

Section 35 talks about professional misconduct and powers of disciplinary committee; however, this section fails to deal with the pendency aspect of these cases. What will happen if the case is still pending before the committee, should the advocate be allowed to practice during that time or not? – In order to answer that, a provision should be added to section 35, wherein the suspension of the advocate could be made during the pendency (in order to avoid further misconduct) by the bar council, but only after due deliberation and advice of the disciplinary committee.

Specificity of punishment if found guilty of professional misconduct

Sec 35(3) only talks about suspension of the advocate if found guilty of grave professional misconduct, however, this does not provide deterrence for any such illegal practice by any advocate or person. Thus, specific punishment and fine should be introduced in order to provide a definitive amount of clarity on the topic and also to prevent speculations in terms of punishment.

It also leaves out the scope of relief provided to the person aggrieved by the illegal activity of the advocate. Thus, in this section, specific amount of compensation should also be given to the aggrieved.

Time limit to dispose of the cases

Section 35(1) mentions the procedure of complaint received, and how disciplinary committee will deal with it. However, due to a large pendency and delay in taking up new cases, this becomes a very tiring and long procedure, thus, a specific time limit should be prescribed by which the disciplinary committee could give their decision. Due to this, cases would be dealt in a swift manner, pendency of the cases would decrease and as a result professional ethics could be better enforced.