Cosmic activities after 2000 has made a tremendous growth whereby most of the powerful countries have made their name in the list of Space activities or launching of an experiment in space. With the increase in space activity there has been large amount of increase in use of technology which in return harm the environment. Which start with the mining of the raw material from the earth to making it refined finished working equipment to using the equipment to the dismantling the material or reusing the same, on each and every step there is different kind of effect/impact to environment i.e. Air, Water, Land, Space, Noise etc., Talking about space there can have many effect of debris to the space and environment such as orbital debris, vacuum exposure, UV radiation, particle radiation, atomic oxygen, thermal cycling, contamination and nuclear radiation. 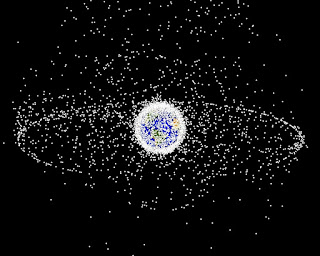 WHAT IS SPACE DEBRIS OR ORBITAL DEBRIS?

We don’t see space junk in the sky, beyond the clouds and further than the eye can see, it enters low Earth orbit (LEO).

LEO is an orbital space junk yard. There are millions of pieces of space junk flying in LEO. Most orbital debris comprises human-generated objects, such as pieces of space craft, tiny flecks of paint from a spacecraft, parts of rockets, satellites that are no longer working, or explosions of objects in orbit flying around in space at high speeds.
Most “space junk” is moving very fast and can reach speeds of 18,000 miles per hour, almost seven times faster than a bullet. Due to the rate of speed and volume of debris in LEO, current and future space-based services, explorations, and operations pose a safety risk to people and property in space and on Earth. There are no international space laws to clean up debris in our LEO. LEO is now viewed as the World’s largest garbage dump, and it’s expensive to remove space debris from LEO because the problem of space junk is huge — there are close to 6,000 tons of materials in low Earth orbit

THE GROWTH OF SPACE DEBRIS

Space debris has been increasing rapidly since the start of the Cosmic Age. Space debris is any human-origin object in space that not serves a useful purpose. The following slides show how the quantity of space debris orbiting round the Earth has increased since 1957, when the primary satellite—Sputnik 1—was placed in orbit and therefore the first pieces of space debris were created. Space debris can stay in orbit for an extended time—decades in orbits near the world, and essentially forever at very high altitudes. Over time, the quantity of space debris has increased dramatically, as these slides show. It has become dense enough in some parts of space to threaten satellites, which may be damaged or destroyed if they hit debris.[i]

1. The fastest growth is in orbits very on the brink of the world , where the primary satellites were orbited. These appear to make a fuzzy shell round the Earth within the slides. This region is understood as Low Earth Orbit, or LEO. It contains roughly half today’s active satellites and half the known space debris.

2. Within the picture for 1970, debris within the Geo-stationary ring (GEO) has become obvious. during this special orbit, satellites orbit the world in 24 hours, so a satellite orbiting above the equator will remain above an equivalent spot on the world . this is often particularly useful for communication and broadcasting. Since these satellites must be above the equator, they form a revolve around the world instead of a shell. Constellations of satellites used for navigation, just like the GSP satellites, lie midway between LEO and GEO. Launching these satellites is liable for a number of the debris seen therein region.
Medium Earth orbits (MEO)—between LEO and GEO

Around 22,500 objects greater than 4 inches are known to exist in the orbit of Earth out of which less than 5% are operational payloads, therefore the remaining are the classified as space debris. While the population of particles from 0.1 inches to 4 inches is estimated to be 5,00,000 and likely to be more.[i] There is a significant risk of these objects to satellite operations also to the environment on land or in atmosphere due to the probability of damaging or catastrophic collisions, such as demonstrated collision between Iridium 33 and Cosmos 2251 in February 2009 generated over 1900 fragments 4 inches or larger. In next 30 years there has been expected collision of 9 to 10 objects in Low Earth Orbit after the adoption of debris mitigation guidelines. The European Space Agency’s Database and Information System Characterizing Objects in Space (DISCOS) describes the occurrence of four other collisions since 1991, and D. Wright (http://www.ucsusa.org) suggests that a further four may have taken place below figure.

The possibility of further collisions will consequently increase, as the population of debris increases continuously. This will have a considerable impact upon satellite operations, because operational spacecraft will experience many close approaches with nonzero collision probability. At the time of the first recorded on‐orbit collision in 1996, the Computation of Miss Between Orbits program operated by the US Space Control Centre identified over half a million close approaches of under 100 km between catalogued objects per day. 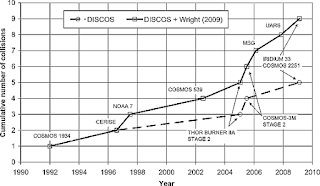 In March 2019, on the order of Prime Minister Narendra Modi ISRO destroyed live satellite in low orbit making it 4th country to possess anti- satellite system. Destroying satellites in low orbit bands that are heavily used for both military and civil satellites also have undulation effects, producing dangerous clouds of debris that could stay in the orbit for decades or even centuries, disabling or destroying any satellites they collide with each other. The countries need to find a way towards keeping space safe for everyone to use and doesn’t create new risks of conflicts on Earth’s environment. Defense missile “hit-to-kill” weapons designed to target enemies missiles as they travel through space are used to target satellites in low-earth orbit and ballistic missiles may travel at same speeds and altitudes. This “hit-to-kill” technology is what China used to destroy a satellite in 2007 and used by US to destroy a satellite in 2008. Approximately 40 percent of all orbital debris larger than one millimeter in size is in LEO. Large numbers of naturally occurring particles (“meteoroids”) add to the total number of orbital objects less than one centimeter in size.

Debris generation appears to have surpassed the absorption capacity of the space environment. Studies indicate that the evolution of the space object environment has crossed the tipping point to a runaway situation in which an increasing number of collisions―mostly among debris―leads to an uncontrolled population growth. It is thus in the interest of all mankind to address the debris problem in order to preserve the space environment for future generations. International space law protects the space environment. Article IX of the Outer Space Treaty[ii] obligates States to avoid the harmful contamination of outer space. The provision corresponds to the obligation to protect the environment in areas beyond national jurisdiction under the customary “no harm” rule of general environmental law. These norms are applicable to space debris and establish the duty not to pollute outer space by limiting the generation of debris. They become all the more effective when the principles of sustainable development are taken into account, which infuse considerations of intra- as well as inter-generational justice into international law. In view of the growing debris pollution and its related detrimental effects, it is obvious that questions of liability and responsibility will become increasingly relevant. Studying colloids on Earth is complicated by gravity, which causes some particles to rise and others to sink. The long list of colloid research on the space station includes Binary Colloidal Alloy Tests (BCAT), a series of more than 40 experiments that began in 2004. Many BCAT experiments looked at phase separation, the point at which a mixture separates, which plays a role in product quality and shelf life.

1 thought on “Impact of Space Debris on Environment in India”