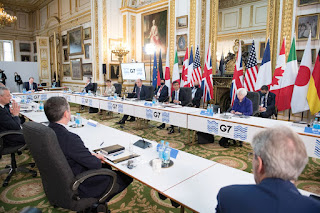 In a historic international taxation systemdeal, closing cross border tax loopholes when the Finance ministers from the group of seven rich nations (G7) signed a landmark accord setting a global minimum corporate tax rate, forming the foundation of a worldwide deal. The giants are known to exploit the loopholes reducing their tax liabilities.

US President Joe Biden proposed a $6 trillion budget “reimagining” the US economy.

He would raise top income and capital gains tax rates, changing the taxation of wealthy estates, auditing the rich preventing tax evasion. The American Families Plan[i]seeks to raise $1.5 trillion over a decade via higher taxes on the 1%.

A hypothetical situation of an entrepreneur owning a UScompany. The products sold are Air pods in the UK. Earning high profits from the UK sales into the borders of the US, paying a tax rate of 35% on the profits. As it’s quite high, is going to be advised by a tax lawyer to set up another entity in Ireland.

The income earned through the sale would be under the Irish jurisdiction and instead of paying 35%, paying 12.5% corporation tax according to Irish laws. Ireland has a modern and open economy attracting a huge amount of inward investment by multinationals and financial services businesses committed to OECD BEPS global tax reform process. Moving to the Cayman Islands, jurisdiction is in the Caribbean territory. The effective tax rate here is Nil, therefore he won’t have to pay anything.

Google was caught by the US authorities in 2015 with identical loopholes.

Such nations are enticing major corporations and giants by unreasonably low corporate tax rates and a business-friendly environment. The companies set up their subsidiaries in countries like Ireland and Luxemburg, shifting from the US to the headquarters leading the tax revenue down, forcingtax rates reduction to compete with these nations.

Governments use reductions in fiscal burdens to:

1.       Boost the inflow of productive resources

On 5th June 2021, the finance ministers from the G7 nations made a landmark global tax deal of the creation of a global minimum corporate tax rate of at least 15%. The deal was signed to end the “30-year-old race to the bottom on corporate tax rates”, as rightly said by U.S. Treasury Secretary Janet Yellen urging the world’s 20 advanced nations to adopt a minimum global corporate income tax at the Chicago Council on Global Affairs. OECD has coordinated tax negotiations with 140 countries regarding the rules for taxing cross-border digital services and curbing tax base erosion.

Countries such as Ireland and Dublin have boomed their economies with the influx of billions of dollars in investment from giants. Their objective would be to reduce the tax rate close to 12.5% / exemptions.

The US is taxing all overseas income at the new 15%rate preventing the corporates shifting profits. When entrepreneur earns the profits in Ireland, paying the tax rate of 12.5%, the US government would interfere collecting an extra 2.5% (15% – 12.5%).

Why “Global” minimum tax rate and not “US”?

The US and its advantage on digital companies

US Digital companies overpower jurisdictional limitations delivering their services digitally to other countries escaping the tax liability from humongous profits earned. The countries can use digital tax competing with such an edge over US taxations.

The opportunity negotiating with the US over its competitive advantage by aid of digital companies and catering their services on global large markets, such asIndia, and earning profits with no tax payment& US needing the support of other countriesto establish a global minimum corporate tax rate.

In 2021, 9 nation’s cricket teams would compete in the most difficult and grand championship to win the World test Championship, 2021. The 2019 statement of comprehensive income pegged ICC’s annual net income at $392 Million, which is ₹3000 crores. The company would have to pay ₹650 crores at another place. The place where ICC operates& is registered, the British Virgin Islands (BVI), isn’t known for cricket.

BVI doesn’t have any taxes collected other than payroll tax, stamp duty for real estate transactions, and import duties. BVI is a zero-tax territory, with no tax on income, capital gains, sales, profits, inheritances, &corporations. Exempted Capital gains realized on most transactions by non-residents of BVI. ICC wouldn’t pay tax on its humongous global income. Its subsidiaries are located in no-tax areas such as in the FZ (Free Zone) in Dubai, providing a no-tax holiday for 10/15 years under the UAE company ownership law and 10-year residency law taxing oil, gas companies, and foreign banks.[iii]Mauritius provides holidays / extensive exemptions from taxation to entities generating external income.[iv]

Repercussions for the Globe

When the deal forces the multinational companies to pay the taxes where they operate and a global minimum corporate tax rate at 15% in the G7 and G20 in the future, benefiting the US. Bane for countries in western Europe and law tax European jurisdiction i.e the Netherlands, Ireland, Luxembourg, and a few in the Caribbean depending largely on tax rate arbitrage to attract MNCs. China has no clear objections expressed, but looking into the strained relationship between China and the US, there are some issues. Beijing being concerned as Hong Kong is the seventh-largest tax haven in the world, the largest in Asia.[v]

The tax havens loss incurred by the US treasury is nearly $50 billion a year. India’s annual tax loss for tax haven and corporate tax abuse is estimated at over $10 billion. Countries are losing a total of over $427 billion in tax yearly to international corporate tax abuse and private tax evasion.[vi]

India’s stand in the taxation regime

On September 21, 2019, FM Nirmala Sitharaman announced a reduction in 22%corporate taxes for domestic & domestic manufacturing companies to 15%. The 22%concessional tax rate for existing domestic companies,subject to conditions with the insertion of a section (115BAA) to the Income Tax Act, 1961 after the Taxation Laws (Amendment) Act, 2019.[vii]

The cuts bring India’s corporate tax to the average rate in the Asian countries, 23%, with China and South Korea at 25%, Malaysia at 24%, Vietnam at 20%, Thailand at 20%, and Singapore at 17%. The tax rate, inclusive of surcharge and cess, for the domestic companies in India is 25.17%.

Government’s stand is participativeglobally on the corporate tax rate. Immunizing the taxation system to the challenges posed by the digital companies,government has introduced “Equalisation Levy”, 2016 introducing taxation indigital economy.[viii] In a long run seems benifiting India as it is a major market for a large number of tech companies. India has a high tax regime therefore would not affect India.