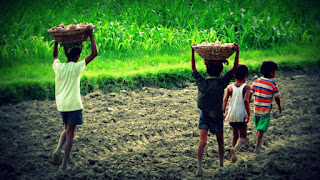 This article focuses on the contemporary issues of child labour especially in this time of the Pandemic, followed by its background, the situation around the world and in our country and laws which are about it on the national and international level.

“The world has marked the rise of the child labour for the first time in two decades and the Coronavirus crisis threatens to push millions of young people towards the same fate”, said by United Nations.

The International Labour organization and the UN children agency UNICEF said that the number of child labour stood at 160 million at the starting of 2020, which was an increase of 8.4 million in four years.

The increment started before the hit of the Pandemic, therefore, marking a dramatic reversal of a downward trend in which child labour shrink by 94 million between 2000 and 2016.

Since it will be around two years soon with the Covid-19 Pandemic, the lockdown, economic crisis all over the world and school closures, especially in rural areas with a lack of connectivity issues and internet resulted in the situation where families decided to make some hard decisions which resulted in the swell of the child labour activity.

Child labour is considered as an exploitation of children (5 to 14 years) via any form of work that is harmful to a child.

For example, a child working in a coal mine or on a construction site can be lethal for his mental as well as physical health.

With the Industrial Evolution in the UK in the 18th Century, there was a rapid increase in the exploitation of children with the involvement in the factories and mines.

Even the famous German Philosopher Karl Marx had said that “British Industries could not live without sucking blood, and children’s blood too”

World first-child Labour Day was observedin 2002 with the theme of “A future without child labour” It was launched by the International Labour Organization (ILO) to focus attention on child labour practices across the world.

Every year on 12th June, to highlight the plight of child labour, the day brings together various organizations, countries and millions of people around the world and find ways to eradicate it or fight against it. Around one in ten of all children worldwide is in child labour”

Child labour laws have been managed by the International Labour Organization (ILO) which is a United Nations (UN) body. With the increment of Child labour, various international policies have been framed till now with an attempt to decrease child labour all around the world.

The following laws/conventions and ratifications have been mentioned below which has been recognized by the majority of the countries and has also been ratified.

Minimum Age Convention,1973 (C138)was adopted by ILO, which is a policy designed to eradicate child labour across the world. Different ILOs has been assigned to various fields of activities. Till now 178 countries has signed this Convention.

Convention on the Rights of the child,1990(CRC/UNCRC) was adopted by United Nations in which Civil, political, economic, social, health and cultural rights of children are defined.

Till now (as of 16th July 2021) 196 Countries are its members which included every member of the United Nations except the United States of America.

India ratified this convention on 11thDecember 1992, with the acceptance to the principals to all the articles but with certain reservations.

Worst Forms of Child Labour Conventionwas adopted by International Labour Organization in 1999, this convention is signed so that a country undertakes to take immediate action to ban and eliminate the worst forms of child labour.

International Program on the Elimination of Child Labour (IPEC), This effort intends to eradicate child labour in the long run by bolstering national capacity to address some of the causes of child labour. The so-called time-bounded programme nations, where child labour is most common and schooling prospects are limited, are one of the major initiatives. Apart from child labour, one of the aims of the IPEC is to preventthe utilization, securing or offering of a child for prostitution, for the creation of erotic entertainment or for obscene exhibitions and the utilization, getting or offering of a child for illegal exercises, specifically for the creation and dealing of drugs characterized in the pertinent global settlements.

With the advent of child labour across the world and the making of its laws internationally, India has also been active in making laws to provide support to the children of the country and the government has tried their best over years to eradicate child labour in India.

No child who has not. completed fourteen years old will be utilized or allowed to work in any studio, as characterized under the Act, wherein any of the cycles set. forward in the schedule to the Act is continued.

Post-Independence, the passing of The Factories Act of 1948 banned the practice of using a child in the Factories.The major goals of the Indian Factories Act, 1948 are to control factory working conditions, to regulate health, safety, welfare, and yearly leave, and to establish particular provisions for young people, women, and children who work in factories.

The Mines Act of 1952was enacted with an aim to ensure the safety and well-being of miners working in coal, metals, ferrous, and oil mines.

The Child Labour (Prohibition and Regulation) Act of 1986 prohibits the employment of children under the age of 14 in life-threatening activities listed in a list by the legislation, and the Juvenile Justice (Care and Protection) of Children Act of 2000 made child labour a criminal offence.The 1986 ‘Child Labour’ Act allows for ‘Bans on the employment of minors in specific jobs and procedures’ in Part III.

The Right to Education Act, which was passed in 2009 for the capabilities for all the children for the completion of free and mandatory education from 6 to 14 years of age.

All things considered, when exploring child labour work in India in 1996 and 2003, Human Rights Watch tracked down that most government authorities answerable for implementing the law neglected to do as such. Unlawful managers never confronted authorize. Cash that the public authority designates for restoration, which is basic for keeping kids from getting back to perilous work, stayed unspent.

Human Rights Watch encouraged the government to do more to address the conditions that force children into the most heinous kinds of child labour, such as a lack of access to school and caste-based violence and discrimination.

Sarve shikha Abhiyan,2001 was started to train impoverished and working children in every country. Women’s Ministry and child-building has provided training and non-formal education.

The Juvenile Justice (Care and Protection) of Children Act of 2000made it a wrongdoing, culpable with a jail term, for anybody to acquire or utilize a child in any hazardous activity. This demonstration gives discipline to the individuals who act in repudiation to the past acts by employing children to work.

HOW TO ERADICATE CHILD LABOUR

Though Child labour was increasing with the time there was a decline in it before the Pandemic hit but the tables have been turned and again, we can observe the increment in the child labour practices across the world.

But still, we can control child labour in India and all over the world with the help of the following steps.

1.      Increasing Awareness: – Spreading awareness among the communities so that people, especially parents will be aware of the demerits of sending their child for industrial activities and telling them about the health issues which a child can face which will be harmful to their family in the long-term effect.

2.      Free Education– Many families take this miserable step to earn especially for basic necessities like food shelter and water, also known as (roti, kapda, makaan) in Hindi which is a common term that can be heard by middle- and lower-class families. The Right to Educationwhich provides free education for children between the age of 6 to 14 years will encourage people to send their children to complete their education despite sending them to industrial works.

3.      Rural Education in India– The extent of accomplishing all-inclusive essential schooling in the rural areas of India is wide. All it requires is an all-encompassing methodology, worked with by collective endeavours of government foundations and non-administrative associations (NGOs). The normal vision should be to make designated moves for resolving issues like school quitters, deficient study hall space, absence of educators, and lack of ordinary school fundamentals. Government-NGO joins are fundamental to engage youthful and out-of-younger students who have a place with migrant families, classes with less privilege or tribals.

4.      Privilege to Migrant Workers-Many of them have been uprooted by violence, catastrophe or poverty – they may also be coerced into employment or even trafficked, in particular when they migrate alone or take irregular paths with their families.Violence, abuse and other breaches of human rights are regularly committed against children trafficked. And some people could be obliged to violate the law. The threat of sexual exploitation is widespread for females, and military forces or organisations may exploit them for young children.Therefore, certain laws like The Migrant and Seasonal Protection Work Act protect the Minors and seasonal agricultural workers by establishing employment standards thatare related to wages, housing, transportation, disclosures and recordkeeping which will protect the rights of migrant workers resulting in the protection of their children too of their respective families.

5.      Offline classes for children with restrictions: With the advent of the Pandemic, the mode of teaching has been shifted to completely online mode, therefore, students which live in rural areas do not have access to good internet which makes it difficult for them to experience distant learning. Providing them with cell phones or mobile sim networks is not the solution because still, they will have to face network issues due to the area especially in mountain or hilly areas, The only option which they are left with is to discontinue their education and help their family with farming and other works. Therefore, reopening of schools with covid -19 norms and guidelines can be helpful so that students can continue with their education and can enjoy their rights to educate themselves.

Other forms to eradicate child labour are expanded family wages, schooling — that assists kids with acquiring abilities that will assist them with making money, social administrations — that help kids and families endure emergencies, like illness, or loss of home and sanctuary, family control of ripeness — so families are not troubled by youngsters that they can’t bear to really focus on

From the above article, we can state that child labour is still prevalent in many countries, recently there was a decline in it but after the hit of the Covid-19 Pandemic, the situation is getting back to what it was, therefore resulting in hard making decisions. Children are the future of our country and if their presence will be destroyed it can result in Economic stagnation, Health issues for future generations and it will lead to discrimination and malicious treatment and exploitation among the children.

Therefore, protecting the children of ill-treatment and giving them full access to liberty and spreading awareness about their rights is very important for the growth and well development of the country.

This blog is authored by Amber Raaj, student of Symbiosis Law School, Noida