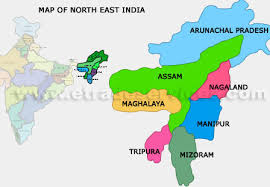 The region
India’s Northeast, also referred to as the land of the seven sisters, comprises the States of Arunachal Pradesh, Assam, Manipur, Meghalaya, Mizoram, Nagaland and Tripura, which collectively account for about 8 per cent of the country’s geographic area and roughly 4 per cent of its population. The region is understood for its ethnic, linguistic, cultural, religious and physiographical diversity.[i] The North Eastern region is perhaps one among the foremost diverse in terms of the ethnicity, languages and practices. Arunachal Pradesh for instance, is claimed to be home to somewhere between 30 and 50 distinct languages. Further, historically, the north east for the foremost a neighborhood of the past has not been a part of the remainder of the ‘administered India’,yet one more failure for the country is that the unrealized tourist potential of the whole area. Abounding in Himalayan grandeur and other picturesque hills, home to variety of rivers, and with an upscale flora and fauna diversity, the whole region has had the potential to be completely driven by tourism. Unfortunately, again successive governments failed during this aspect too and therefore the poor handling of varied unrests, compounded with much neglect from Delhi, has made this impossible too.

Since Independence, the Indian education system has secluded the histories of quite 45 million Northeastern citizens (who currently account for nearly 4% of India’s population). To a layperson, the Northeast is nothing quite a couple of stereotypes of being home to insurgents, terror attacks, and AFSPA violations. Beyond these tropes lies an upscale historical document displaying the cultural and political prowess of the Northeast which is overshadowed by the legacies of the Mughals and Mauryas in history textbooks.[ii] Continued exclusion points to selective readings of an ‘Indian’ past, one that is largely rooted in colonial administrative strategies.

In an interview of DrSukanya Sharma, Professor of Archaeology and Cultural Studies at IIT Guwahati, points out that British Raj had clear intentions to isolate the Northeast for its own gains. Doing so secured the availability of tea, oil and timber while simultaneously creating a strategic buffer between French Southeast Asia and British-controlled Northeast India. consistent with Dr Sharma, “to isolate Northeast India, major verifiable historical sources were disturbed. In fact, an entire new department [Department of Historical and Antiquarian Studies] was created to write down a history of Northeast India highlighting Southeast Asian linkages. Capitol Hill communities were clubbed as ‘uncivilised, savage’ by using powerful mediums like ethnographic accounts (J P Mills, Verrier Elwin, Haimendorf etc.), and described as so primitive that that they had no history.[iii]”

The fact is verifiable historical evidence and artefacts available spanning from coins of the 7th century AD to temple ruins which still exist in Assam, as refutations to such political historiography.

The historical amnesia extends well into the better-recorded era also. The Northeast states have played indelible roles in India’s freedom struggle, since as far back because the 19th century. The Battle of Imphal-Kohima during war II greatly influenced the Indian freedom movement and galvanized mass public demonstrations, eventually inspiring the revolt of the Royal Indian Navy in 1946. Although voted because the ‘greatest British battle’ by the National Army Museum in London, Imphal-Kohima remains largely forgotten in India alongside many other movements and martyrs of Northeastern origin.[iv] Rest of India (ROI) must realize the WW-II battles fought in Manipur which stalled Japan’s progress and which had a serious impact on the result of the war. About the history of the princely state of Manipur (just like more in ROI) before it had been integrated into the republic of India. About the UNLF, its demands and activities in Manipur and therefore the troubles along the border with Myanmar.

Political Reason: Our Constitution machinery has did not address the requirements of the people. The region is essentially neglected in areas of Administration, Defense, Education, Scientific Development etc. aside from this, some grave problems have also erupted up in times which is making the matter worse. The recent one is that the misuse of AFSPA act by the military personnel. The act has provided dreadful samples of violation of Human rights. The military forces in name only of condemning the external threats have committed serious atrocities on the civilians. Though numerous cases are led by the civilians but no action has been taken. Thus we see north east in a method being neglected by the govt. It’s thanks to this several rebel and revolts are rising.[v] Naga Insurgency is one of this. For years, a neighborhood of the leadership and therefore the educated elite among the Northeastern states became willing partners with the ‘exploiter’ class from Delhi and mainland India. And this process began not today but almost three decades ago. If Nehru was the over-sentimental benevolent dictator, bestowing largesse on the straightforward tribal folks, his daughter Gandhi initiated then perfected the art of shopping for over the Northeast. One illustrative example of Jawaharlal Nehru’s over-generosity’ within the early sixties came in Nagaland. The Legendary AZ Phizo had just launched the insurrection within the Naga Hills within the then composite Assam. and therefore the Naga National Council was demanding more autonomy to the world, because the first prime Minister’s cousin and former Governor of Assam, B.K. Nehru told me in an interview in 1990, “Jawaharlal had this sentimental thing about the Northeast tribals. When the Nagas were just demanding an autonomous district, he gave them an entire state which really opened the pandora’s box.”[vi]

Historical Reason: Pre-Independence successive legal and administrative decisions taken between 1874 and 1935 gave the areas of the Northeast their distinct identity. British administration initially treated Capitol Hill areas as ‘Non- Regulated Areas’, then declared them a ‘Backward Tract’ and, eventually categorized them as ‘Excluded Areas’ and ‘Partially Excluded Areas’. On the one hand, the region is diverse and heterogeneous. On the opposite , it’s quite homogeneous; the stratification found in other parts of the country isn’t present within the Northeast. The tribal societies within the hill areas are egalitarian. As a result, the sort of poverty found in many other parts of India doesn’t exist in most of the hilly States of the region.[vii]

Post-Independence the creation of Bangladesh (now Bangladesh) further aggravated the matter . an outsized piece of landmass visited different nation and therefore the connection of north Malay Archipelago with main land India broke.[viii] With one stroke of his blue pencil, Sir Cyril Radcliffe isolated the region from the rest of India. As a result, the region’s seven states are now connected to the main body through a 30km wide Chicken’s neck corridor running through North Bengal.

Geographical Isolation/Reasons[ix]: Within the pre-partition days, residents of Tripura could reach Calcutta overnight. Today it takes a minimum of 60 hours to try to an equivalent. Therefore the first problem is isolation. Physical isolation aggravated the already existing mental quarantine. Most of other insurrections within the region, are direct fallout of this neglect of the world by the ruling government both in Centre and within the region. That’s the second problem within the Northeast: Neglect. The natural consequence of neglect has led to the third problem: insurgency. Large scale misuse of central funds has widened the gap between the haves and therefore the have nots, leading to frustration among the kids. This frustration has often found expression within the swelling ranks of the militant organizations across the region. Consider this: years after Independence, six of the seven state capitals within the region aren’t connected by rail. The whole Northeast has got to import essential goods worth nearly Rs. 2,500 crore annually for modernised agricultural practices. Northeast by the centre because the figures of funds released by All India Financial Institutions. Out of the 50,000 crore plus sanctioned by these institutions, Assam got a measly 114crore, Nagaland Rs. 4crore and therefore the remainder of the states went without 1 paise. All the states within the region are today heavily in debt; Assam’s internal debt today actually stands at a staggering Rs. 6,000crore.

The Northeastern a part of the country gets negligible space and time in national newspapers and on television channels. the rationale for such an attitude are often found within the book, ‘Manufacturing Consent’ by Herman and Chomsky during which it’s been described how “money and power are ready to filter the news fit to print”.[x] Rarely, newspapers just like the Statesman, dailies which have footprints outside of the region, have a fanatical Northeast page in their editions. Be that because it may, one cannot deny the very fact that the Northeastern states are neglected by the national media. in 2012, the North Malay Archipelago Image Managers (NMAIM), a gaggle of media and communications professionals hailing from the Northeast and dealing in metros, revealed that a staggering 87 percent of execs couldn’t name all the Northeast states among respondents in Delhi, Mumbai and Bangalore. When asked on why the respondents couldn’t give much information on Northeast India, an awesome 61 per cent squarely blamed media.

Take the natural resources available with the region. Arunachal Pradesh has such a lot of water resources available that it can produce about 30,000 MW of electricity through hydro projects. This energy isn’t only sufficient to feed the region’s states but also to export to the neighbouring countries also. Another point that the Northeast has in its favour is that the proximity to Southeast Asia. Converting unauthorised trade activities into authorised trade, both at the policy level and at the bottom level. Declaring certain areas of the Northeast Region as trade Areas officially; and an aggressive strategy for creating a growth quadrangle involving India’s Northeast, Myanmar, south west China, northern Thailand and Bangladesh. Assam is that the key to the event of the Northeast; within Assam, priority should tend to modernise its agriculture. Given the rich natural resources base there’s considerable scope for increasing agricultural growth. this might be done by improving the cropping intensity, extending season farming through irrigation and diversifying into other areas like horticulture, fisheries, and dairy production.[xi]

[vi] Nitin A Gokhale, The Neglected State Of Nations- https://www.outlookindia.com/website/story/the-neglected-states-of-the-nation/220206.