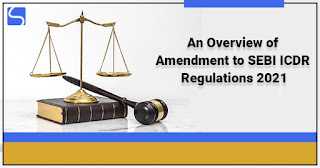 The SEBI in the SEBI (Issue of capital and disclosure requirements) regulations, 2018, has made certain amendments with the consideration of fresh uptrend in the IPO marketplace and for keeping up the balance & stability financially. The revised regulations would impact both the investors and the issuing companies. The regulations on the preferential allotment of shares were also amended or updated.

Paytm had a crash of a loss where it lost over one-third of its original value after its IPO launch. The majority of the companies that obtained a hyped valuation in their IPOs, for example, Zomato, Paytm, and others are currently working and valuing themselves at a much lower margin and value, at a significant loss. Due to this volatile behavior and potential losses for every IPO regularly, the investors that pour their funds and infuse the same into such companies were at a serious threat of losing out their money. The imbalance would create an impact on the experience and ease of investment into the market. The trust and reliance on the working and regime of every ecosystem need to be reasonably user friendly, here the investors have a reasonable share of right to have a secure share into the funds they infuse on these companies through their respective IPOs.

The pricing band guidelines have the objective and aim to fight through the intent and preference of the companies to restrict and limit the price band of the value of their issues. A narrow approach in the price band, as preferred by the companies, disrupts the price discovery process.

Where the inorganic growth is concerned and mentioned in the offer letter as an objective, on the contrary, the financing target or acquisition is not specified, the amount for the general corporate purpose (GCP) must not surpass 35% of the total money raised in the IPO.

Where the company has not mentioned the acquisition target in the draft offer document, the sum allocated must not surpass 25% of the total sum collected by the issuer.

If the same (targeted acquisitions or financing investment objectives) are specified and clarified declarations have been made and specified in the draft offer document, the restrictions do not apply. The percentage of the total fund received that will be used for acquisition or regular financing would be disclosed through these regulations. The acquisition of unspecified objectives would be limited and the companies would be cautious while raising the amounts.

Conditions regarding Offer for Sale (OFS)

The same is listed for sale by selling shareholders that hold under 20% of the issuing companies pre-issue shareholding is capped at 10% of the same. The withdrawal methods of private equity, venture capitals, and other stakeholders would be constrained in terms of their extents. This still would be needed for reflection as the majority of the investors are with the objective of quitting after the IPO.

A minimum of 5% price band is decided and a price discovery mechanism would be able to generate and monitor investors’ desire for the share before determining the issue price. The gap between the upper and lower pricing band would be at a minimum of 5%.

Previously, the freedom to choose their respective price bands was misused and now, the higher price band should be at least 105% of the lower one. This would be fairer for the investors and their security would be ensured.

The lock-in period has been extended from 30 days to 90 days. The same would apply to 50% of their total allotment. The rest 50% would be locked in for 30 days. These anchor investors invest amounts into the issue to increase its demand and the reputation of the same. This will help the companies and enrich their value in the investors’ market. The investors that are not genuine or not serious regarding their investors would be filtered out as the lock-in has been increased therefore they would be reconsidering before investing without commitment.

One-third of the portion open to NIIs would be for the ones with application sizes between 2 Lacs and 10 Lac. The rest two-thirds would be available for the ones having the application sizes of 10 Lacs and above. The allotment for NII would be the same as the individual retail investors through the process of “Drawing of lots”. After April 2022, the bifurcation would be applied. This would address the investors between the individual small investment category and the HNIs.

The look-back period for the settlement of the floor price has been lowered from 26 weeks/2 weeks to 90 days/10 days.

The floor price is supported by a valuation report from a registered independent valuer for infrequently traded securities and transactions involving a change in control or allotment of more than 5% of the issuer company’s post-issue diluted share capital to an allottee or to allottees acting in concert. A committee of directors would be required to give reasoning into the rationale and recommendation into aspects of preferential issuance, like pricing. As 26 weeks is a long period when it comes to the volatility of the market, the same has been lowered.

In the case of promoters:

In the case of non-promoters

The minimum lock-in period would be reduced from 1 year to 6 months. 3 year lock-in period was quite long and inconvenient for the company with a long-term history. The rationale and alignment between the lock-in period between the preferential shares and provisions of the public issues will allow quick exit to the promoters and non-promoters.

The promoters or their groups would be allowed to pledge shares locked into the preferential issue if the pledge of such specified securities is one of the terms of sanction of a loan granted by certain financial institutions. The same has to be sanctioned to the company for financing one or more objects of the preferential issue’s object.

Previously, during the lock-in period, the promoters were not allowed to pledge shares allotted to them under a preferential issue.

The new rules are said to provide a healthy and secure environment for the investors and in contrast, are also said to limit the reach horizons for the companies involved. The flexibility can be reduced in the same way the transparency would be increasing when the details of the usage of the funds are concerned and to be revealed. The liquidity may be an issue where the investors would not be willing to put in the funds for a long period of time that is 90 days.

SEBI would need to assist the investors in the investments of the companies. The lose or gain, however, both are to be on the side of the investors.

The uncertainty would definitely reduce when the price bands are expanded to avoid undervaluation or overvaluation. The loopholes in the regulations are aimed to be filled up with these new regulations. The protection of the investors is the concern of the regulator, transparency to be kept in play, and the compliance to be strong.

The regulations are modified looking into the dynamic requirements of the system and markets. The booming IPO market also booms up the issues and frictions between the stakeholders involved and the regulations aim to reduce the same. The ambitions may be pushed down and boosted up respectively in subjective cases looking into the personalized cases of issuing companies or investors.