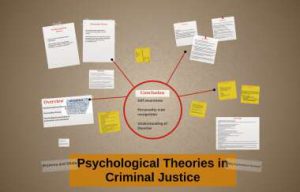 The motive of this article is to evaluate the reasons behind the crime done by an offender or a group of offenders, the psychological factors that govern such acts and the intention behind it. The criminal justice system is very concerned with the development of the criminal theories of crime. It is very imperative to understand these theories to avoid further increases in crime rates.

The criteria for evaluating psychological crime causation theories are outlined, beginning with logical structure, appropriate definitions, general versus specific focus, verifiability, and distinctions between crime and deviance. The most common criterion for evaluating theories has been based on the ability to explain major facts, such as crime rates, cycles, and victims’ characteristics. Other standards include relationships between crime and delinquency, predictive tests, the impact of the criminal justice system, and practical applications of theoretical concepts.[1]

When an offender commits a crime, he has the knowledge of what he is doing or what will he do to the victim, the main focus of the psychological aspect of the crime is the reason behind hisactions and what was the reason forcommitting the crime. There are various factors that influence the psychological crime causation of a crime.

ASSUMPTIONS OF PSYCHOLOGICAL THEORIES OF CRIME

Some people run into trouble because they didn’t develop, or grow, the way that others normally do.

2. Learned behaviours of aggression and violence

If someone is surrounded by violence and aggression, they are more likely to become violent and aggressive themselves, because they have learned that those behaviours are okay.

There are some characteristics that criminals tend to share with each other, and some psychologists believe that there are certain personality traits that predispose someone towards criminal behaviour.

4. Relationship of criminality to mental illness

While examining the psychological theories of crime, one must be cognizant of the three major theories.

The psychodynamic theory is primarily concerned with how early events affect adult development and criminal behaviour.[3]Sigmund Freud, the father of psychoanalysis, developed this hypothesis.Imperative to this theory are the three elements or structures that make up the human personality:

The primitive aspect of a person’s mental makeup that is present at birth might be thought of as the ID. The unconscious biological need for food, sex, and other living necessities, according to Freud, is represented by the ID. The notion that ID is preoccupied with immediate fulfilment or pleasure while ignoring care for others is crucial. This is referred to as the ‘pleasure principle,’ and it is frequently emphasized when talking about illegal activity.

The ego, the second component of human personality, is assumed to emerge early in a person’s existence. For instance, kids frequently throw a tantrum when they realise that their requests can’t be fulfilled right away.

Freud proposed that the ego controls a person’s activities or behaviour to keep him or her inside the boundaries of society in order to make up for their demands. The reality principle serves as the ego’s compass.

The superego, the third component of personality, emerges as an individual adopts the moral principles and values of their community, parents, and significant individuals, including friends and clergy. Morality is the superego’s primary concern. The superego has the function of evaluating people’s conduct and deeds.

The Psychodynamic theory of crime suggests that criminal offenders are frustrated and aggravated. They are constantly drawn to events from their childhood. A criminal offender has a weak ego as a result of a negligent, unhappy and miserable childhood, which is frequently characterized by a lack of love and nurturing.Research suggests that having a weak ego is linked with poor or absence of social etiquette, immaturity, and dependence on others

The second major psychological theory is behaviourism. The social learning theorist is Albert Bandura. Human behaviour is developed through gaining and learning experiences while growing up.The notion that people alter or change their conduct in response to the reactions of others is central to behavioural theory (Bandura, 1978). In an ideal setting, rewards reinforce behaviour and negative reactions or punishments suppress it. Crimes, according to behaviourists, are learnt responses to life’s conditions. The most relevant to criminology is a social learning theory, which is a component of behaviour theory. Albert Bandura is the most well-known social learning theorist (1978). Bandura believes that people are not born with the ability to act aggressively. In contrast, he proposed that violence and hostility are learnt through a process of behaviour modelling (Bandura, 1977).[4]

In other words, youngsters learn aggression by observing others. Aggressive behaviour is modelledafter three primary sources:

The second source of behavioural disorders, environmental experiences, reveals that people who live in high-crime areas are more likely to exhibit aggressive conduct than those who live in low-crime areas (Shelden, 2006). One could claim that high-crime neighbourhoods lack conventions, rules, and customs (Bohm, 2001). Furthermore, there is a lack of traditional behaviour. Inability to find work, drug or alcohol misuse, and failure to observe local, state, and federal laws are all examples of unorthodox behaviour.

The third source of behavioural problems is the mass media. It is difficult to discern the ultimate role of the media regarding crime. Scholars have suggested that films, video games, and television shows that depict violence are harmful to children. Ultimately, social learning theories beckon us to accept the fact that the mass media are responsible for a great deal of violence in our society. They hypothesize that children who play violent video games and later inflict physical or psychological damage to someone at school did so because of the influence of the video game.

Significant progress has been made in describing criminal conduct within the cognitive framework in recent years.Individuals’mental processes are the focus of psychologists in this field. More importantly, cognitive theorists seek to comprehend how criminal offenders see and mentally represent their surroundings. How people solve their difficulties is germane to cognitive theory. Two subfields of the cognitive theory that are worth discussing are where the first branch is moral development, which focuses on understanding how humans morally represent and reason about the world. Information processing is the second subdiscipline. Researchers here concentrate on how humans acquire, retain and retrieve knowledge. Scholars are ultimately concerned with the process of those three stages i.e., acquisition, retention and retrieval. Within the cognitive framework, one theory focuses on moral and intellectual growth that the individual reasoning process develops in a systematic manner. As a result, an individual will continue to develop from birth onward.

The first stage focuses on obedience and punishment. This level is most often found at the grade levels of kindergarten through fifth grade. In this stage, individuals conform to socially acceptable norms. Authority figures such as parents, teachers, and school principals are credited with this conforming behaviour. Ultimately, this obedience is enforced by threats or punishments.

The second stage is characterized by individualism, instrumentalism, and exchange. This characterization implies that individuals seek to fulfil their interests and recognize that others should do the same. This stage maintains that acting in one’s own best interest is the right thing to do. A conventional level of moral reasoning is often found in adults or young adults. It is believed that individuals who reason conventionally are more likely to judge the morality of actions by comparing those actions to societal viewpoints and expectations.

In Stage Three, the individual recognizes that he or she is now a member of society. Coinciding with this is the understanding of the roles that one plays. An important concept within this stage is the idea that individuals are interested in whether or not other people approve or disapprove of them.

Stage three is when the individual begins to see himself or herself as a member of society. In conjunction with this is the understanding of one’s roles. An important concept within this stage is the idea that individuals are interested in whether or not other people approve or disapprove of them.

In Stage Four, the premise is based on law and order. In this stage, individuals recognize the importance of laws, rules, and customs. This is important because,to properly function in society, one must obey and recognize the social pillars of society. Ultimately, individuals must recognize the significance of right and wrong.[5]

A society without laws and punishments leads to chaos. In contrast, if an individual who breaks the law is punished, others would recognize that and exhibit obedience.

Criminological ideas include both theories of breaking the law and theories of creating and enforcing criminal law. In contrast to the latter, which aims to explain the commission, incidence, and patterns of criminal and deviant behaviour, the former tries to explain the content of the laws and the actions of the criminal justice system. Processual or micro theories focus on individual differences and social processes, whereas structural or macro theories concentrate on variations in group and societal rates of crime. Understanding crime and criminal justice is the goal of criminological theory. Theories help determine whether policies have a greater or lesser chance of succeeding, but they do not make moral judgments about what should be done.[6]

Humans are made by God not to hate or kill anyone but to spread love, humanity, helping the poor, but the human now can do anything for his good, laws that are made for the benefit of humans are been violating and misused by them. Nature is under a constant threat of being exploited by humans for their benefit, humans have exploited their lives in a manner that money is more important than the life of any individual. Psychological factors which are seen in the offender, as well as other people,are lust, hatred, revenge, ego, power of money, selfishness etc.

A theory must be assessed using the standards of clarity and consistency, scope and parsimony, testability, practical utility, and empirical validity, either on its own or in contrast to other theories. The most crucial of these is empirical validity.