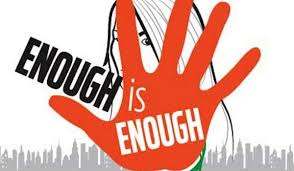 “Trauma can happen to you, but it can never define you”. – Melinda Longtin

Domestic violence is a sad reality of our Indian society, a truism. Firstly we have to understand what the phrase “Domestic Violence” means. Domestic + Violence these are two different terms. Domestic means “existing within territory of house or something related to family or home” and Violence means “behaviour which damages or hurts someone by using physical force”. Overall this phrase means Behaviour of somebody which includes physical, verbal, sexual, mental and psychological attacks that adults use against their family members. It has a close relationship between the victim and the offender. Domestic violence at home destroys lives.

“Abusive behavior at home isn’t ordinarily a particular occasion and isn’t constrained to just physical aggression. Or maybe, it is the inescapable and efficient utilization of threats, intimidation, manipulation, and physical violence by somebody who looks for force and authority over their intimate partners”.

Violence against women particularly intimate the partner violence and sexual violence is a major public health problem and also a violation of women’s human rights. In a survey, one in 3 women experience sexual or physical violence, or both, caused by someone whom they know. Abusive behavior at home affects kids, women, the family and the community and it likewise has huge social, economical and personal effects. It can be said that this is the root of crime against women. The mentality of the society is to be gender-oriented, its ideology that men are stronger and more powerful than a woman. Such people control their lives over women because it is a part of their power play or simply say that their self-respect believes that a woman should have faith in them and should bear it silently in whatever they say or abuse. In a survey it was found that some women who suffered domestic violence they moved towards either destruction or their aggression increased or they became victims of depression. But those women who did not face it all they were ahead in reproduction and in incorporation. According to ‘United Nation Population Fund Report’, around 2/3 of married Indian women are sufferer of domestic violence attacks and more than 70% of married Indian women within the age of 15 and 49 are victims of beating, forced sex or rape. More than 55% Indian women suffer domestic violence, especially in states of U.P, M.P, Bihar and Northern states.

Justice Dipak Mishra and Shiva Kirti Singh sentenced 5 years jail to a man who tortured his pregnant wife who at last committed suicide. They claimed that, “This looks like the story of such a significant no. Of comparative youngsters who end their life because of untold tragedies and difficulties looked by them inside the bounds of the four dividers of their marital home”.

According to Unicef’s Global Report Card on Teenager 2012, 57% and 53% of Indian boys and girls think that a husband is justified in beating or hitting his wife. The dowry system, honour killing, and patriarchal norms against women have brought about extraordinary and various instances of aggressive behavior at home.

“Law does not recognise domestic violence against men. Basically common concept is that a man cannot be a victim of violence. This helps women get away unpunished.”

Men also face domestic violence by man or by women by his family or relatives. Men also face forced sex they also get tortured. Sometimes women also misuse the laws given for their protection against men. Due to domestic violence men are also facing emotional trauma and because of it they don’t want to come out.

“In 2004, the National Family Health Survey (NFHS) has found that about 1% or an estimated 60 lakh women have perpetrated physical violence against husbands without any provocation”.

Strange fact about this survey is that mens are not asked about that if they’re dealing with domestic violence or not. People existed with this taboo that “Mard ko dard nhi hota” . In today’s time men’s are also being victim of domestic violence but they cannot show their scar or fear.

Violence against children’s is not only a threat to their survival and health, but also to their emotional well-being and future. Violence against children’s is widespread and growing rapidly and remains a bitter truth for millions of children in India. More than half of the children in the world have undergone many types of violence and 64% of them are in South Asia. Culprit includes parents, family members, caretakers, teachers etc. In India, 9% of girls and women aged 15-49 detailed having experienced sexual intercourse and other sexual acts, for many women this happens at a young age with upto 5% of 15-19 year olds having experienced the same.

Children’s who are living with disabilities, they are mostly facing domestic violence in their livelihood it can be of sexual, verbal or physical.

As much as the access of internet has been increases, it also increases the amount of violence against children as parellel with it such as- cyber crime, online sexual exploitation with life-changing and damaging consequences.

“In India there is no law regarding domestic violence for the protection of children”.

Child labour, prostitute, child-marriage etc makes grater impact on public domains but in reality intra-family and domestic violence are those kind of things on which they got minimal attention and treated with silence.

“Domestic violence does not always include hitting or fighting over things. Basically it is an abuse of power. The abuser include both ways i.e, physically or emotionally to maintain control. Although both girls and boys are the victims but the percentage of girls are higher”.

Domestic voilence can’t see gender, it does not matter who you are – a child, a men or a women. It can be happen on anyone of these. Domestic voilence includes: physical assault, emotional and psychological abuse, bullying, limiting decision making, social isolation and dominating behaviour. It is difficult to recognise how many person are dealing with domestic voilence because there are many unregistered cases.

In the case of women, they are treated like they are weaker part of the family, so they’ve to be below against family members.

In the case of men, the mentality of the society is that men always have a aggressive nature so they can’t be a victim of domestic voilence.

In the case of children, they are pressurise to do work and make them bound to do some specific work since childhood which put their future in danger.

Those who are victim of domestic voilence they have not to suffer from this basically they have to raise their voice against it. I want everybody to know that they deserve a life of Respect, Dignity and Freedom – that’s it never too late to speak up.

We have to make this country a safer place to live for everyone.

39 thoughts on “Domestic Violence : A sad reality in Indian Society”