India has been deemed the ‘Rape Capital’ of the world because of the high rape crime rates.Every six hours a woman is raped in India, this is according to National Crime Record Bereau.The University of Hampshire found out that the countries with the most pornography streaming also have the highest rape cases.Could this be the same for India?Rape cases have become so common in India and the question lies, ‘Does streaming pornography promote rape culture?’ 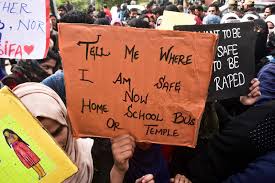 Pornography has become so normal that even young children can watch it.The age restrictions on the sites are just there for formality purposes but in actual sense,no one is hindered from watching pornography.If an eleven years old boy can watch pornography,what really could be the reason behind it and what does he sort to learn?There are some sites which actually show rape pornography and if a person as young as eleven years old is watching such videos the only thing they are learning there is that it is okay to have sexual intercourse with someone without their consent,it is okay to intoxicate someone and rape them.Their reasoning is not yet that effectivehence if they grow up with that mentality,we as a nation could be raising future rapists.Sooner or later they will want to put to practise what they have been watching ever since they were kids.

There have also been abnormal situations which are portrayed as normal by these pornography sites ,For example,a teacher having a sexual affair with a student,a minor for that matter or an employer asking for sexual favours from an employee.Anyone who is in either of the superior positions could be excited to do the same after watching such.If the supposed victim refuses to consent,it is undeniable that they are most likely to get raped because the other person would think everyone does the same on internet and it is normal then why are they refusing?In all this,pornography would have promoted rape culture.

Moreover,some rape accused persons have come forward with some confessions that they were influenced by pornography to commit the offense.In the case of Manoj Kumar (accused) and Gudiya (victim),the accused confessed to watching pornography before brutally raping the victim.Another gang rape of a twenty three years old student which happened in 2012 is proof that pornography promotes rape as the accused committed the crime after watching violent pornographic videos.Psychologists who have had encounters with people accused of rape for counselling have also asserted that one of the reasons for sexual aggression is the addiction to pornography.A youth from Gujarat was arrested after raping his mother and he admitted the crime claiming that he had been watching pornography before raping his mother .With such confessions,one can assert that pornography really does promote rape culture in India.

Lack of knowledge of the law also plays a role in the rise of rape crimes.Sexual harassment is defined under section 354A of the Indian Penal Code and not everyone has the knowledge as to what is considered as sexual harassment and what is not.Due to the viewing and streaming of pornography, most of the illegal actions might be deemed normal and legal if one does not have proper knowledge of the law hence resulting in rape cases.

However,there are other reasons besides pornography,as to why there is rape culture in India.Pornography is not watched by males only,females also do.Most people watch it for the purpose of sex education.How many cases are there where a female has had to rape her son,husband,employee or whoever just because she watched a video and could not control her excited hormones?Honestly,such cases are very rare which then attributes that a person’s mentality has everything to do with their actions and how they behave after watching pornography.

Furthermore,some research done after interviewing people who have been accused of rape attributed that financial frustrations,sexual frustrations,influence from drugs and alcohol and the urge to feel superior,among other reasons,lead one being pushed into partaking in such crimes.Some people get themselves involved in these crimes because of their backgrounds and family history influences.If a child grows up in a family where the father sexually abuses the mother and becomes vulnerable to seeing such scenes,they are most likely to revenge so as to take out their traumatic frustrations by doing the same.

1 thought on “Does Pornography Promote Rape Culture In India?”