In the last few years, disputes related to property, land, and rent-related to those respective properties have increased progressively. It is a general estimated statistics report which states that approximately 7.7 million population in India is stuck in a conflict situation over 2.5 million hectares of land area. Such situations of conflict are affecting and largely threatening the economy of the country as investments are worth more than Rs. 14 lac crore.

The filing of suits for land dispute cases takes a lot of time as there is the filing of eviction notice or ejectment notice and processing through the trials. In India, land occupies a central place for the development of the country and which is the reason that finding a solution to such disputes which are civil in nature is of utmost importance.

As per the general survey report, approximately 66% of the civil suits filed in Courts are related to land, or rent, or property disputes in India. Further, the report states that the average pendency of a case that is related to land, or property, or rent from its creation to its resolution by the honorable Supreme Court of India is 20 years.

The terminology suit refers to the attempt to gain an end by a legal process which is a process instituted in a court of law for the recovery of a right or claim.
The terminology eviction here means to expel or force one or more people from their property to move out. In the general sense, the term ejectment refers to casting out but in the legal sense, it is a legal process of compelling or throwing, or removing someone from their property or holdings.

The terminology property can be defined as movable, immovable, tangible, intangible, or any other thing which is owned by an individual or a group of persons who have their interest or right in such properties.
The terminology rent is a payment made by a tenant at intervals in order to occupy a property.
An agreement is a legally binding contract that contains certain terms and conditions that are enforceable in a court of law.

Civil law is the body of law dealing with the private relations between members of a community. It contrasts with criminal law, military law, and ecclesiastical law. 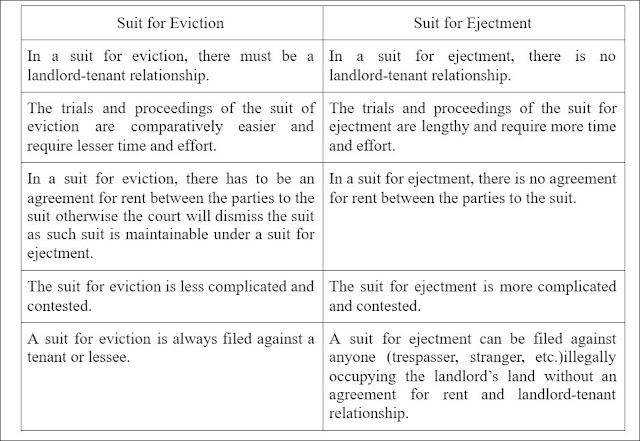 Perspective under Indian or International scenario

Under Indian law, a suit for eviction and a suit for ejectment is maintainable under the Transfer of Property Act, 1882. However, states have the power to make their own laws relating to rent, and many Indian states such as Bihar and Mumbai have their own state laws relating to rent. Thus, those states conform to the statutes without violating any provision of the central legislation.

Under International law, many countries such as Floria, Miami, Georgia, etc. follow the same concept as the Indian Courts and they also have written provisions in their respective legislation and statutes.
Summary of leading cases

In this case, the plaintiff filed a civil suit in the District Court of Indore, Madhya Pradesh against the defendant for eviction of the suit premises. This case was re-appealed in the High Court.

In this case, it was held that if the tenant states that he was unaware of the fact that who was the landlord does not take away the title of the actual landlord of that property. The Court further held no decree for eviction can be filed as there remains no landlord-tenant relationship.

In this case, it was held that an individual who is a co-owner can maintain a suit on his own in case of ejectment of a trespasser or a tenant at sufferance.

In this case, the Court held that the suit was rightly filed for eviction and not for ejectment or mandatory injunction of defendants from the premises.

In this case, it was held that whenever a suit is filed for possession against a licensee which is either on the grounds of revocation or termination then the suit is for the eviction of the trespasser.

Hence, there is a very basic but clear line of difference between a suit for eviction and a suit for ejectment. To understand this difference and to apply it while initiating a suit is of utmost importance.