According to the report published by National campaign against Torture 2019, 1731 custodial deaths were reported which means on an average five custodial deaths are reported in a single day. The Custodial violence is the crime which is often unspoken and ignored all these times. Recent death of George Floyd in America and Sathankulam custodial death of Jeyaraj and Fenix once again shocked the conscience of the whole nation that ignited protests and made people and government to acknowledge the importance and need of a comprehensive law on torture to prevent police brutality and custodial death in the future. 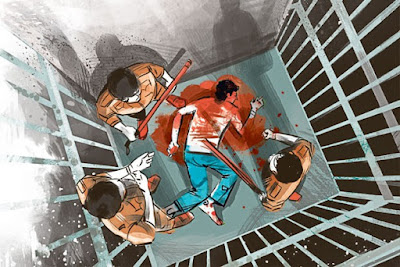 This article deals with custodial violence with reference to recent custodial torture instances. Custodial violence is the most dreadful crime committed by public servants which constitute a serious threat to contemporary society. At first the term custodial offense is not defined under any act. General meaning of custodial violence includes torture, atrocity or excess power exercised by the police officers on the arrested persons. Usually, in a criminal case Police officers have prime duty to investigate. Unfortunately this duty is being misused by some police officers who torture the arrested persons and show no humanity and even sometimes assassinate them behind bars.

At international level the law on torture was introduced for first time by UN Convention in the year 1975.India being the signatory of UN Convention is obliged to enact domestic law on torture. In India Anti torture bill was introduced and this matter was discussed many times in the Parliament but not yet passed. Prevention of torture bill was passed in Lok Sabha in the year 2000 but was not accepted by Rajya Sabha till now. At present times law on torture is desperately needed to preserve and protect personal liberty and human dignity as it is the core fundamental rights guaranteed by Indian constitution.

Recent death of George Floyd by police officer in USA resulted in heavy protest all over the world. In this case George Floyd, black man was arrested for buying cigarettes using counterfeit coins. Police handcuffed him and kneeled down his leg on his neck when George Floyd refused to enter police jeep. At one point of time, he was not able to breathe and died. After the huge protest “black lives matter” congress ultimately passed a police reform bill and along with it is discussed to maintain a national database which will register all police misconducts.

CASE OF JEYARAJ AND FENIX

In this case Jeyaraj and Fenix was arrested by police officers for keeping shops open beyond the curfew hours during COVID 19.The police officer first picked Jeyaraj to police station for the purpose of investigation. Overtime his son went to police station to know the grounds of arrest of his father. Both father and son were arrested and taken to magistrate for the purpose of getting remand. Magistrate is conferred with the power to pass remand order under SEC 163 of Criminal procedure code. In Nakkeeran Gopalan case it was held that judicial magistrate must carefully examine the arrest and must be subjectively satisfied before passing remand order. In this Sathankulam issue the Magistrate failed to examine properly and apply his judicial mind properly before passing remand order. After getting remand from magistrate both Father and son were tortured to the hell in police custody which is so terrible even to describe. Police officers tortured them by beating, kicked Jayaraj with their shoes multiple times and even they were given sexual tortures. Is this appropriate way to treat them? Even if they are accused still according to our Indian constitution, they must be punished only according to the procedure established under law which is enshrined under art 21 of Indian constitution.

Chapter V of code of criminal procedure deals with arrest of person. But there is no exhaustive definition for the term arrest in criminal procedure code. Simply arrest means a mere apprehension to a person that his legal rights will be restrained by process of law. Arrest can be made by police officer, magistrate or even by private person. But power to arrest a person predominantly lies with the police officers. The main objective of arrest is to bring the arrestee is to secure his presence before the court of law and to deter the person from committing evil crime in the society.

In case of non-cognizable offence the police officer cannot arrest without warrant. First summon must be issued by the concerned jurisdictional magistrate. The accused is bound to appear before the court. If the accused failed to appear then magistrate have power to issue BAILABLE/NON-BAILABLE warrant depending on the fact.

Circumstances where police officer can arrest without warrant is stated in SEC 41, 42 AND 151 OF CRPC

Police is obliged to prepare arrest memorandum. Arrest memorandum must contain all the details regarding the arrest. Memo includes name of the accused, signature of witness, time of arrest, etc.

Arrest memo must be issued to the accused and it must be counter signed.

Arrest must be communicated to relatives and friends of the accused without any unnecessary delay.

In making an arrest police must officer shall touch the body of the person and confine him. In the case of women, her submission to the custody of an oral intimation of arrest shall be presumed and unless the police officer is female, she shall not be touched by the police officer at the time of time.

Police is authorized to use some force when the accused tries to evade from arrest.

This section does not give right to cause death of the person who is not accused of an offence punishable to death or life imprisonment.

Women shall not be arrested after sunset and before sunrise. In exceptional cases women police officer can arrest after getting permission from the concerned local jurisdictional magistrate where the offence is committed.

No person shall be deprived of his life and personal liberty except according to procedure established by law. Art 21 of Indian constitution is equally extended to convicts. Some of the rights pronounced by judiciary includes – right to speedy trial, right against handcuffing, right to free legal aid, right against inhuman treatment, right against delayed execution etc.

No person shall be convicted of any offence except for violation of law in force at the time of commission of offence.

No person shall be prosecuted and punished for the same offence more than once.

No person shall be compelled to be a witness against himself.

Arrested person must not be detained in police custody more than 24 hours after arrest without getting permission from magistrate.

In this case an advocate was detained by police officers when he was called for certain inquiries regarding a case. He was detained in police custody more than a day without the order of magistrate and his detention place was not informed to anyone. A writ petition under Art 32 was filed in Supreme Court for his release. In this case the apex court ruled that on the request of arrested person the police officer must inform the place to relatives, friends and to all those who are concerned about his life.

(ii) Apex court also held that an entry must be made in the diary which must contain the details of the persons to whom the information is communicated.

This is the landmark case in which certain guidelines were pronounced by honorable Supreme Court to prevent custodial torture.

All the above mentioned copies must be submitted to the magistrate. Magistrate has duty to examine all these copies with utmost care before passing remand order.

This is case of illegal detention where a person was detained for more than 14 hours even after his acquittal order. Supreme Court directed the State government to pay compensation of RS 30,000/- for violation of his legal right.

Supreme Court ruled that use of third degree method by police will violate art 21 of Indian constitution.

In this case the Court emphasized the danger of excess power exercised by police officers with regard to detention in police custody.

ii) Ordered that police must give opportunity for the arrested person to appear before them to explain why show cause notice should not be initiated against him.

iii) Magistrate must check whether sec 41 A is strictly adhered by police officer and the magistrate must not authorize detention mechanically but rather he must be subjectively satisfied before passing remand order.

Custodial violence should be recognized as heinous crime and there is need to pass an act immediately to punish the police officers who indulges in torturing the arrested person which they consider as part of their investigation process. Mostly vulnerable sections of the society are the most affected the one who are not even aware that it is an offence. Therefore it is the duty of the country to protect persons from police brutality. A mere protection in statute alone will not sufficient but it must be ensured that implementation is done duly to protect the arrested persons.

This blog is authored by- M. Niranjana student at, School Of Excellence In Law, Chennai