Under a criminal conspiracy one reason by which an individual is perhaps held culpable for an offense which he didn’t really perpetrate is his being an insider of the conspiring acts to carry out the offense. Through the help of amendments, the Legislative body had brought about laws identified with conspiracy in India in accordance with the English law. The object of the same was to forestall the commission of violative acts. 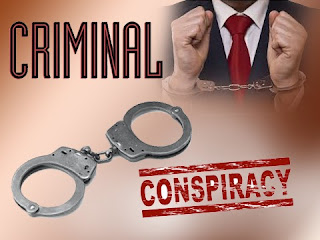 The essence of the wrongful acts committed in conspiracy is an agreement made to violate the law. The members involved in such activities to such an understanding will be held blameworthy of conspiracy, regardless of whether the illicit undertaking consented to be done has not been committed. So, it’s anything but an element of the offense that all the members ought to consent to commit an unlawful act. It might contain the commission of various acts.
There should be solidarity of motive or reason, however, amongst the conspirators there might be several means in some cases even obscured to each other. In accomplishing the objective a few offenses perhaps committed by a portion of the conspirators remain unidentified to other people. The main pertinent factor here includes that the commitment of unlawful activities must be suspected to facilitate the prime goal of conspiracy.

Criminal conspiracy exists when at least two individuals consent to perpetrate any unlawful or illegal act and some move is made in order to execute it. The undertaken activity need not necessarily be an offence, but rather it must show that those associated with the acts of conspiring knew about the arrangement and expected deliberately to overstep the law. Regardless of whether the individual has originally perpetrated the wrongful act, he’d still be held indicted for the offence of conspiracy.

Criminal Conspiracy defined as per Section 120A of the Indian Penal Code, 1860:
“When two or more persons agree to do or cause to be done —

Provided that no agreement except an agreement to commit an offence shall amount to a criminal conspiracy unless some act besides the agreement is done by one or more parties to such agreement in pursuance thereof.” [1]
Conspiracy is completely an undisclosed undertaking. At the point when at least two people go into a consensual agreement to do a wrongful act or in a wrongful way, there is supposed to be a conspiracy amongst them. The Indian Evidence Act, 1872, includes several provisions for the acceptability of particular sorts of proof against a criminal conspirator. Section 10 of the Indian Evidence Act, 1872, accommodates the pertinence of disclosures made or acts committed by conspirators concerning a typical plan.

Section 10 of the Indian Evidence Act, 1872 deals with the aspect of things said or done by conspirator in reference to common design. The section provides that:
“Where there is reasonable ground to believe that two or more persons have conspired together to commit an offence or an actionable wrong, anything said, done or written by any one of such persons in reference to their common intention, after the time when such intention was first entertained by any one of them, is a relevant fact as against each of the persons believed to so conspiring, as well for the purpose of proving the existence of the conspiracy as for the purpose of showing that any such person was a party to it.” [2]
Under section 10, the distinct element of the part in conspiracy is that anything which has been said or done or composed by any individual acts as a proof against the other individuals in the event that it identifies with the conspiracy. This part must be perused along with Section 120A of the Indian Penal Code. At the point if any conspirator in reference to common design has surmised to commit a conspiring act, it is a segment of res gestae. There should be similar interest amongst the members whilst committing the act of conspiracy. The conspirators conspiring together serves as a prime condition for the application of Section 10. The act of conspiracy is, consequently, a wrongful act of at least two people to do any unlawful or violative act by wrongful methods. There should be sensible grounds to accept that at least two people were involved together in conspiracy to submit an offense.

Components essential to apply section 10 of the Indian Evidence Act, 1872 are as follows:

The principle behind Section 10 of the act is that the conspirators have presumed a specific uniqueness whereby any disclosures made or act committed, with respect to the conspiracy, by and large or towards any of the conspirators falls under the segment of res gestae and consequently, gets permissible/ admissible and the complete procedure is done by incubating a conspiracy to accomplish something. Consequently, the indictment can’t be relied upon to set up the connection between acts or explanations of accused conspirators with permitting the offering for building up the connection.

The quintessence of Section 10 exists in the articulation, “common interest.” This implies a similar interest existing when it was stated, or composed by either of the members. Any explanation or disclosure or confession made to an outsider after the commitment of conspiracy had stopped to exist then it wouldn’t be held permissible against the other party.
A conspiracy not just comprises the interests or deliberate intention of the members, however the consensual arrangement of the members to commit a wrongful act by wrongful means. There must be sensible and equitable grounds to accept that at least two people have planned together to commit the act of conspiracy. At the point when accused made the confession after similar interests of the members was no longer in presence Section 10 can’t be summoned against accused conspirators. [4]

An individual can become a part of the act of conspiracy by word or by his actions. In any case, criminal duty regarding conspiracy requires in excess of more than just intention or attitude to commit the particular act. One who submits an unmistakable activity with information on acts of conspiracy will be held blameworthy. Furthermore, one who implicitly agrees to the purpose of conspiring and obliges different conspirators, really holding on while the others put the acts of conspiracy into impact, is liable however he expects to take no dynamic part in the wrongdoing. Under conspiracy a rule of the law is established stating that there ought to be at any rate two members. One individual alone can’t plot. Be that as it may, abnormal outcomes followed from specific situations where both of the conspirators are unequipped for carrying out the wrongdoing or is resistant or has been exculpated.
Under cases like these, the act of penalizing a conspiracy not followed by a conspicuous act might be inspected. An individual might be arraigned alone for the act of conspiring with people who are deceased, obscure, uncaught or perpetrating the wrongdoing or the ones who have been exonerated from the crime. The rule isn’t applicable bearing except if one is cleared.

Based on the proof recorded, the Magistrate outlined charges against the accused conspirator and the appellant. The prosecution and the appealing party had filed revision applications in the High Court. It was held in the High Court by a single judge that the Magistrate should take into consideration anew whether the papers/ documents, which he had conceded under section 10 of the Indian Evidence Act were acceptable or not and furthermore consider whether it was important to outline extra charges.

The Additional Chief Presidency Magistrate after this order released the accused conspirators because no obvious act was demonstrated against the appealing party and other accused conspirators no thought can be induced as against them. Division Bench of the High Court permitted the revision petition documented by the prosecution and held that the Magistrate had no legitimate capacity to release the denounced subsequent to outlining the charge. In the appeal made to this Court it was pleased for the benefit of the appealing party that in passing the disputed request, the Magistrate was just acting in conformity with the perceptions and suggested headings contained in the regulations for the High Court. [5]

It is held that from the pertinent provisions as per section 53 and elucidation of section 55 of the Indian Evidence Act, it is understandable that the proof of notoriety/ goodwill and disposition is significant in procedures which are criminal in nature. As per The Indian Evidence Act, dissimilar to laws prevalent in England, proof can be submitted both of notoriety/ goodwill and general manner/ disposition. General manner/ disposition implies the characteristics of an individual whereas notoriety implies the overall credit of the individual amongst the general society. There is a genuine differentiation among notoriety and disposition. It might be presumed that a particular individual might be a good or a decent man, however truly he could be a man of bad or awful disposition.

The estimation of proof with respects to disposition of an individual relies upon the observer’s shrewdness as well as on his chances to watch the individual just as the said individual’s capability to cunningly conceal his genuine qualities. Be that as it may, a man’s disposition might be comprised of numerous attributes, some great and some terrible, and just proof concerning a specific quality with which the observer is recognizable would be of some utilization.

Regardless, the character proof is a very week proof, it can’t outweigh the positive proof as to the delinquency of an individual. It might be helpful in far-fetched cases to bring ease for the person charged or it might likewise manage the foundation for valuing of his responses in a given circumstance. It must offer position to provide adequate positive proof. [6]

Section 10 of the Indian Evidence Act of 1872 is very extensive in nature and has a lot more aspects which needs to be discovered upon. The part of Conspiracy is very wide in nature, it includes several facets of evidential laws and covers vast variety of case laws under it.

2 thoughts on “Criminal Conspiracy Under The Indian Evidence Act, 1872”