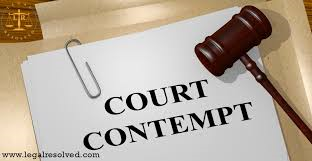 Recently, the Apex Court of India that is the Supreme Court of India on 14th August 2020 held advocate and activist Prashant Bhushan guilty of contempt of court. This case has been looked up as suo moto (1) by the court which were based on two of Bhushan’s tweets when the complaint was filed by a person named Mahek Maheshwari.

WHAT IS CONTEMPT OF COURT?

Oswald has observed, “ Contempt, in the legal acceptation of the term, primarily signifies disrespect to that which is entitled to legal regard; but as a wrong purely moral or affecting an object on possessing a legal status, it has in the eye of the law no existence”.

In the opinion of Oswald Contempt of Court may be said to be constituted by any conduct that trends to bring the authority and administration of law into disrespect or disregard or to interfere with or prejudice parties, litigation or their witnesses during the litigation”.

Section 2 (a) of the Contempt of Courts Act, 1971 (2) provides that ‘ Contempt of Court’ means civil contempt or criminal contempt. Section 2 (b) of the Act provides that “ civil contempt” means wilful disobedience to any judgement, decree, direction, order, writ or other process of a court or wilful breach of an undertaking given to a court. Section 2 (c) of the Act provides that “ criminal contempt” means the publication (whether by words, spoken or written or by signs or by visible representations or otherwise) of any matter or the doing of any other act whatsoever which :

·       Prejudices or interferes or tends to interfere with, the due course of any judicial proceeding; or (4)

·       Interferes or tends to interfere with or obstructs or tends to obstruct, the administration of justice in any other manner (5)

The above definition contained in the Contempt Courts Act, 1971 is not exhaustive. Actually, it is not a definition but classification of contempt of courts. It merely indicates that the contempt may be civil contempt or criminal contempt.

§  Constitutional Provisions: Article 129 and 215 (6) of the Constitution of India empowers the Supreme Court and High Court respectively to punish people for their respective contempt.

Article 142 (2) (7) of the Indian Constitution also empowers the court to punish for its contempt. However what is contempt of court perse has not beendefined by the IndianConstitution.

§  Statutory Provisions: The Contempt of Court Act, 1971 elaborately deals with the concept of contempt of court.

Section 10(8)  of The Contempt of Courts Act of 1971 defines the power of the High Court to punish contempts of its subordinate courts.

Punishment : The Supreme Court and High Courts have the power to punish for contempt of court, either with imprisonment for a term of six months or with fine of Rs 2,000 or both.

WHAT IS MATTER ALL ABOUT?

This matter of Contempt of Court against Advocate Prashant Bhushan is mainly based on his tweets which he had posted in June 2020.

The tweets in question were critical of the top court and posted by Bhushan on Twitter on June 27 and June 29. The June 27 tweet said, “When historians in future look back at the last 6 years to see how democracy has been destroyed in India even without a formal Emergency, they will particularly mark the role of the Supreme Court in this destruction, & more particularly the role of the last 4 CJIs.”

Further on 29th June 2020 another tweet was made on the Chief Justice of India. The tweet included a photo of CJI S.A. Bobde riding a Harley Davidson motorcycle, and said, “CJI rides a 50 lakh motorcycle belonging to a BJP leader at Raj Bhavan, Nagpur, without a mask or helmet, at a time when he keeps the SC in Lockdown mode denying citizens their fundamental right to access Justice!”

Earlier in 2009 also Bhushan was filed for Contempt of Court. It was that in 2009, he had made remarks about former Chief Justice of India SH Kapadia and KG Balakrishnan when the interview was organised by the Tehelka Magazine. He also said that half of the preceding 16 CJIs were corrupt. The Apex Court that is the Supreme Court of India took suo moto cognizance of this issue earlier when a complaint was filed by Advocate Harish Salve. Tarun Tejpal, former Tehelka Magazine editor name was also there in the case. On 10th November 2010, the matter was heard by the three judge bench and the petition was maintainable. Till now, this case has been heard only 17 times recently.

In this matter of Contempt of Court, Senior Advocate Dushyant Dave had appeared for Bhushan’s side. Bhushan had distinguished between his first and second tweet.

It was claimed by Bhushan that the second tweet made by him constitutes a separate cause of action and court should deal with its proceedings separately and it should be presented before the Chief Justice of India who is regarded as “Roster for allocation of benches”.

In order to support his contention, Bhushan had sited the judgement of Supreme Court in case of Vijay Kurle vs Ors (9). In this case, after taking cognisance and issuing notice to Kurle and others in a pending contempt matter against advocate Mathews J. Nedumpara, another bench of the court placed the matter before the CJI for allocation of the bench.

Further he complained about that he was denied of getting a copy of the petition filed by Mahek Maheshwari and which had became the base of issuing a notice to him. This violates Rule 6 (2) (10)of Rules to Regulate Proceedings for Contempt of the Supreme Court, 1975 (11) which was framed under Article 145 (12)of the Constitution.

According to Bhushan, the word “action” here includes the conversion of Maheshwari’s petition to suo motu petition when it came to the first tweet. The words “shall be”, according to him, vests an undiluteable right in him. This right vests in him even under suo motu proceedings under Article 129, because Rules have been framed under Article 145 .

Relying on case law, Bhushan also contends that contempt proceedings are quasi-criminal in nature. Standard proof applicable is, therefore, that of proof beyond reasonable doubt, he has underlined.

What is Scandalising of Court ? :

Here we are going to read about what is “ Scandalising of Court”(13). Regarding what constitutes the ‘scandalising of court’ the court had already held that the real test is to determine whether the vilification is of the judge as a judge, or as an individual. These are as follows :

§  If the latter, the judge is left to his private remedies, and the court has no power to commit for contempt.

§  For ascertaining good faith and the public interest, the courts have to see all the surrounding circumstances including the person responsible for comments, his knowledge in the field, and the intended purpose.

§  First comes the case when Arun Jaitley, the late minister had said that there are two kinds of judges, one who knows Law and the other who knows Law minister, it was not taken as contempt. He had also remarked that pre retirement judgements are inspired by the post retirement jobs.

§  Another case comes when 4 judges in 2018 held a press conference and questioned the integrity of the CJI and the court, it was not taken as contempt.

§  In a case involving Bhushan himself in 2001, proceedings against him were dropped. The Supreme Court had held that personal criticism of a judge does not amount to “fair criticism”.

§  Justice Madan B Lokur, an eminent jurist presently holding a judgeship of the Supreme Court of Fiji after his retirement, was vocal in his criticism of the Indian Supreme Court’s apathy towards migrant workers who found themselves without wages and food in the wake of the lockdown imposed in March to stop the spread of the coronavirus. This was also not taken as matter of contempt.

The Case was heard by a three judge bench consisted of Justice Arun Mishra, BR Gavai and Krishna Murari. The bench had reserved its order on 5th August 2020.

It was the day of 14thAugust 2020, while reading out the judgement, Justice Gavai said that Bhushan committed “ serious contempt of court”.

The bench hearing this case rejected the argument that the tweet has not really interfered with administration of justice. The Apex Court that is the Supreme Court relied on past judgements by the Supreme Court to initiate the proceedings against the advocate.

It held that it is not necessary to prove affirmatively that there has been actual interference with the administration of justice.

It further argued that if a defamatory statement is likely to interfere with the proper administration of justice, then it can be a ground for contempt.

Also, the comments that can have an inevitable effect of undermining the confidence of the public in the judiciary, can be a ground for contempt.

The Bench also held that Bhushan is guilty of making ‘ scandalous’ and ‘ scurrilous’ comments against the institution of the Supreme Court.

Further, the court, after hearing arguments on the punishment to be awarded to the lawyer, Prashant Bhushan, had reserved its order and gave him time to apologise on 20thAugust 2020.

From the above article, it can be concluded that there must be a balance to be maintained between the right to speech and the court’s power to punish if criticised.

The law is regarded as colonial legacy and many countries like England and the USA had upheld freedom to speech over the criticism of Judiciary. India should also abolish the Scandalising of Court as contempt of court.

Last but not the least I would like to end by saying the words of Lord Atkin, “ Justice is not a cloistered virtue”.

·       Article 215 : High Courts to be courts of record Every High Court shall be a court of record and shall have all the powers of such a court including the power to punish for contempt of itself.

·       Article 145 : When actionis instituted on petition, a copy of the petition along with the annexure and affidavits shall be served upon the person charged”.