The global cash equity market traded volume is around $ 77.55 trillion. Despite its significant volume and high traction in the cash equity market, the industry agonizes with many anomalies – mainly in the pre/post settlements areas. The Straight-through processing is getting failed due to various reasons which are:
1. Missing settlement instructions
2. Incorrect trade bookings
3. Short of stock or cash positions
4. Counterparty Trade 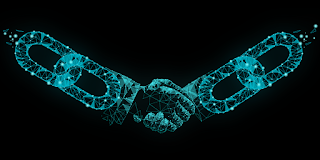 With a humongous list of intermediaries like a custodian, reconciliation team, pre – post-settlement team, stock lending and borrow team, MIS reporting, and asset servicing, there is a need for a new system. Blockchain has become the tool that is used by the Fintech industry to resolve the complex use cases of the ecosystem and also has been used to challenge the Central Security Depository, Centralized Payment clearing system, and other industries, which are the conventional banking culture about using centralized institutions.

Working of Technology and Flow in Blockchain

Each transaction is transferred from one Node to another, which is represented as a transaction addressed as A to B, B to C, C to D. The technology of Blockchain keeps a record of all the transactions from inceptions to the conclusion.
Blocks: The transactions are recorded in blocks that collect all the transactions which are happening at a point in time and are referred and connected to the preceding blocks. This is how the link of the chain is built.
Nodes: The technology of Blockchain is spread and divided into network computers i.e. the “nodes”, which contains a replica or local copy of the entire blockchain.
Majority Consensus: As it is decentralized, the decisions on the network are made out of the majority consensus. Each node after that makes changes in its local copy of the blockchain to make a mirror status of the majority.
Mining: Nodes have two options:
1. Passively store a copy of the blockchain
2. Actively take part in the maintenance of the blockchain

Wallet: Just like other wallets, it stores credentials ( a complex, unchangeable combination of automatically assigned numbers and letters). This helps blockchain users to transfer and transact the cryptocurrency they possess.

The last part of the transaction or process is that a unique addressee is given their wallet, the recipient’s address has to be mentioned with the amount wished to be paid when a transaction has to be made from one user to another, with that is too his/her credential, after the validations, the process is complete. The flow completes with this.

Commencing with the details of the prime technology, DLT, which is a distributed database updated by every participant, known as a node, in which the records in the DLT are timestamped, cryptographically secured, and validated with agreed consensus with the nodes participated. After attaining a majority of consensus, with the participants, the record and updates are automatically done. It is highly challenging to penetrate the system by a hacker and to make changes and the hacker cannot make changes to only one node, the hacker would have to make changes into the entire chain, and also, a blockchain is unalterable virtually. It distributes the digital information and does not copy it.

The working of the blockchain is like a shared word document which is a ledger which is a public database. This database records transactions permanently between two or more parties. It eliminates the third party to authorize the transactions as it distributes a copy to all relevant parties, which is why blockchain helps in recording the digital information in the form of a “Decentralized Ledger”. The major reason for its non-penetrative nature with utmost security is this decentralized nature, with military-grade cryptography.

The method to penetrate the blockchain and to alter the same is to crack the cryptographic security, retroactively altering the previous blocks, and contemporaneous tampering of the records held across all computers connected to the distributed ledger. As there is no centralized authority, there is no central point of vulnerability to target.

Blockchain would be an integral part of any technology and in any industry. The entire structure and ecosystem of blockchain are based on the following prime objectives:

IP rights are authenticated by third parties like the government or administration of the geographical regions, with the inherent physical limitations, it has started to be getting penetrated and cracked. With globalization and the digitalization of the globe, the issues of piracy of copyrighted literary, dramatic, and musical works are fuming up. There is a need for efficient management of the IP assets, with giants creating and having a substantial portion of their industrial framework over the internet, in cases of E-commerce, the geographical limitations are diminishing. Blockchain is expected to become a successor to this “Physical System”, which is inadequate. The stature of possibilities that blockchain offers to the IP ecosystem is humongous.

The current registration which is a centralized database can be replaced by a decentralized blockchain, which is the most prominent application of blockchain technology. The use of a centralized, Blockchain technology-based repository to record the life cycle of IP rights can be considered by the IP offices. As blockchain is in a chain form, which the user could trace back to the origin of the data or from the date of its application. Useful when dealing with claims for “Non-use Revocation”, also for audits, assignments, Mergers, and Acquisitions.

Smart Contracts could be used to perform fundamental functions, though they need constant updating and reviewing with time. They have the ability to perform and execute themselves, when specific conditions are met without any manual intervention, with Suo moto authority.

In a case study framework, with the use of Smart Contract, a person could license a copyright-protected work and the relative royalty payment could be transferred to the licensor on a real-time basis after the work is used. With the use of such contracts, licensing of copyrighted work could be done efficiently.

Offering many untouched opportunities in the facet of off-line ecosystems in the IP rights. Tags and imprints, which are connected to the blockchain, are again scannable and they provide the ability to trace goods on an immutable Blockchain. The ledger would show the relative ownership or authorized licensees and it would help enable all persons in the supply chain, including the consumers and authorities which will distinguish genuine products from counterfeit goods.

With upcoming new small and medium businesses, there is a growing concern over the trade secrets of the new inventions made. These trade secrets can be stored in a private blockchain platform system where the entire and detailed information is encrypted and would also be secure from third-party intervention.

Downsides to the Blockchain

While it has humongous possibilities to elevate the IP and other ecosystems, it has its downsides. The fact that it relies on huge processing power and the transactions per hour is limited, due to which there will still be a need for IP experts.

The admissible quality of blockchain evidence is there in some of the jurisdictional courts, but a complete adoption of the technology in law is far. With high power consumption, powering all “Nodes”, with that there would be a need for a cooling system for continuous operations, which is again high-power consuming. This is why Blockchains are one of the most expensive databases in the world.

France became the first country to regulate the recording the securities transactions on a blockchain system in April 2016. The government ordered legislate rules with “Mini Bonds”.[1]

In the courts across the world, in 2018, a court in Hangzhou (China) recognized Blockchain-based evidence[2] for the first time and the court at the apex level affirmed evidence stored and verified in the Blockchain technology. India doesn’t have any specific law regarding the same but, the Indian IT Act, 2000 protects electronic transactions and contains provisions for the prevention of unauthorized and unlawful use of computer systems. Indian Evidence Act, through 65A the legal significance of e-contracts or smart contracts has attained more prominence making it admissible as evidence in the court of law. NITI Aayog has brought some proactive suggestions and innovations including an indigenous blockchain initiative- IndiaChain.[3]
In the coming years, the adoption of blockchain in order to gain the benefits and upsides of the brilliant technology would be considered in order to elevate the IP ecosystem from its core to the peaks.