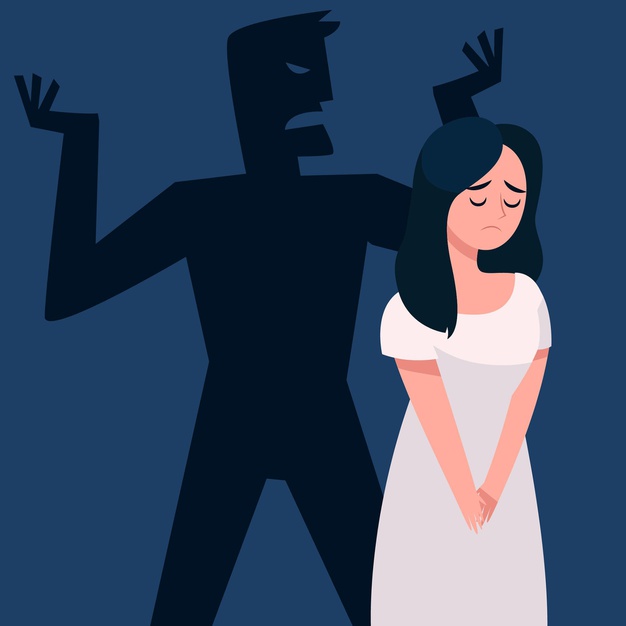 Battered Women Syndrome[1](BWS) is a pattern of psychological and behavioral symptoms found especially in women who have been victim of an abusive relationship for a very long period of time. In order to end this chain of domestic violence, these women kill their abuser, instead of terminating this unhealthy relationship.

Most of the common law countries have recognized the gender-sensitive issues by accommodating the experience of battered women and bringing social changes, however the situation in India is a little different.[2]The article will highlight that as a feminist model of jurisprudence, Battered Woman Syndrome needs to seek judicial recognition in India and needs to be incorporated in Indian Criminal Framework.

Stage one is tension building phase where women experience minor physical violence and verbal attacks by her abuse. At this stage she attempts to pacify the attacker however tension slowly builds and causes low-level conflict.

Second stage is the battering stage; the abuser subjects the women to extreme physical and mental violence. Here acute battering incident takes place and this is the reason which creates most stress for the women and causes her to behave in a particular way.

The second stage is followed by a final stage which is the “honeymoon phase” where the batterer expresses regret, remorse and exhibits “contrite loving behavior.” The batterer at this stage tries to win the confidence back

“Why doesn’t she leave?”

The most prominent reasons she stays with her abusive husband is that she endures psychological and physical violence for so long that she develops a phenomenon called ‘’learned helplessness’’[3]which transforms her into a submissive woman which results in her accepting battering as a part of her life.

It was argued by Lenore Walker that the development of “learned helplessness” in the battered women leads them to become impervious to the serious phenomenon of death. Continuation of the BWS cycle eventually results in making women believe that either they will be killed by the batterers or the batterer will kill them.[4]

As per the National Domestic Violence Hotline, the person who leaves the relationship experience long lasting complications to the extent that they consider up to several times before they finally leave.

In majority of the cases women lack physical and mental strength to fight back with their abusers so when violence reaches them, these women kill their batterers in non-confrontational circumstances or in a provocative stage.

Moreover, the three stage of battering sometimes provide positive reinforcement from the batterer and leaving the house would have adverse economic consequences in many cases where women have no means of earning money. Leaving the husband’s house would mean placing herself and her children in adverse economic and physical position.

During colonial times, husband was seen as the master of his household which empowers him to control his property, and in earlier times women were given the status of property. Moreover as per the common law doctrine of family privacy, the judiciary decided not to intervene into marital relationship and left the woman on her own fate. The justification of values of marital privacy invoked immunity from prosecution and in-turn justified the prerogative of husbands beating their wives.

BWS was developed as a reaction to the fact that women perceive situations differently from men. The doctrine of self-defense in traditional times was based upon the experience of mainly men and there was hardly any accommodation of the self-defense for battered women[5]and their encounter with the provocative situation which were different from those of men. There was heightened sensitivity observed in battered women regarding the impending violence. Furthermore they perceive danger more frequent and sooner than men.

Judicial recognition of BWS in US and UK

The BWS system was first recognized in USA where the nature of domestic violence within the families raised the political concern which helped in bringing out the concrete policy reform in the legislations and criminal justice systems. Initially BWS was used only for testimony purpose and to claim justification for self-defense.

In a popular case of Ibn-Tamas v. United States,[6]where the defendant’s behavior were found matching with the woman exhibiting BWS thus the trial court was granted to consider the BWS testimony.

Similarly in the case of State v. Leidholm,[7] it was ruled by the court that the expert testimony is admissible and the prior history of the abuse need to be taken into consideration in order to determine the guilt of the accused, i.e. wife.

The same principle of law was further applied in the case of State v.Wanrow,[8]where the abusive husband was large, intoxicated and standing just behind his wife, who was on crutches. It was observed by the court that the circumstances pertaining to the defendant becomes major factor in determining whether the amount of force used was reasonable and honest belief.

The ratio of physical strength is relevant information for objective determination of the perceived subjective threats in the mind of the battered woman. Hence the expert testimony was allowed in this case and it was based on the theory of cyclical violence for the admission of self defense.

The jurisdiction of BWS is different in UK; here the partial defense of provocation is taken into account.  R v. Ahluwalia[9]was the first case in UK to accept BWS as reliable evidence, wherein the wife, Kiranjit Ahluwalia, sprinkled petrol on her sleeping husband and set the bed on fire. It was found out that she was subjected to frequent and severe abuse. The Court was of the view that mental state of the accused is a pertinent factor to be taken into account to determine whether the defense of provocation to be granted or not.

However the traditional English Law defines provocation as an act which is so sudden and provocative that causes any reasonable man to lose his self-control for a certain time period.

Based on the traditional notion of provocation, the court in the case of R v. Thornton,[10]convicted the wife who stabbed her long-time abusive husband. Moreover this standard application was upheld in several cases with the reasoning that a cooling-off period after provocation would indicate a premeditated intention on the part of the accused.

Nonetheless, in English Court, the testimony of BWS was given serious consideration to the provocation even on a delayed response by the battered defendant.

The position of BWS is not recognized in India, women in the criminal court are portrayed as mentally deficient, irrational creatures and despite the fact that such actions are taken due to provoking circumstances. There is a need to overview cross-jurisdictional cases in order to evolve a set of fundamental principles for the inclusion of BWS in Indian Criminal Code.

BWS was first recognized in India in the case of Manju Lakra v. State of Assam,[11]wherein the husband was killed by his wife when he came home in a drunken state and started abusing and beating her. She was held guilty of murder by the trial court; however, when appealed before Guwahati High Court, it referred to BWS and observed that the victim in this case is not the husband but the wife.

Various contentions were raised where battered women kill her abusive husband in non-confrontational circumstances and fail to fall under the ‘heat of the moment’ condition for the defense of provocation. The courts in Poovammal v. State of Tamil Nadu[12]have considered “sustained provocation” as an extension of first exception of section 300 of IPC, which is having grave and sudden provocation to deprive the accused the power of self-control.

Similarly, in the case of Amutha v. State, it was held by the Madras High Court that the wife tried killing her daughter and herself due to the provocative conduct of her husband. When the wife survived, the court granted her anticipatory bail because it recognized the BWS. Recently, in 2016 in the case of State v. Hari Prashad, an accused husband was convicted by the Delhi High Court due to his provocation which led the wife to commit suicide.

It is a need of an hour that Indian Criminal Court should recognize the history of the abuser, its resultant psychological impact and links it with the atrocities that a battered woman had to suffer. Such a measure will not only have a huge positive impact upon woman but also provide justice to her children.