The below case is a detailed analysis of whether or not the word rent includes just the rent of the land or building or the amenities attached with it also the accessories attached to it. ”building’, means a residential or non-residential roofed structure and includes:
(i) any lead (including any garden), garages and outhouses, appurtenant to such building;
(ii) any furniture supplied by the landlord for use in such building;
(iii) any fittings and fixtures affixed to such building for the more beneficial enjoyment thereof.’
Keywords: Rent, Building, Land, Amenities, Fittings, and Fixtures. 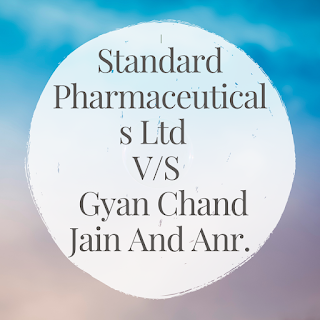 1. On 1st April 1968- the premise in question was let out to Standard Pharmaceutical Ltd. 24, Park Street, Calcutta.
2. 1st April, 1983- After the lapse of years, rent was increased from Rs. 2,000/- to Rs. 2,500/- and after five years the rent was further increased to Rs. 3,000/- w.e.f. 1st April 1988.
3. On 5th January 1991- The original plaintiff (respondent) landlord by notice after the amended Rent Control Act came into force on 1st December, 1988 gave notice and increased the rent by 10%. Consequently, the rent became Rs. 3.300/- per month up to 31st July 1991.
4. Thereafter, the original respondent (appellant) failed to pay the rent. The respondent filed a petition for eviction before the Rent Controller. The proceedings before the Rent Controller continued. On 14th February 1994, the defendant in terms of Section 6A read with Section 8 of the D.R.C. Act gave the notice to increase the rent further by 10% from Rs. 3,300/- per month to Rs. 3,630/- per month and filed the suit.
5. The appellant disputed the jurisdiction of the Civil Court under Section 50 of the Delhi Rent Control Act and submitted that there was no cause of action, also denied that the rent was ever increased from Rs. 2,000/- to Rs. 3,300/-.
6. Para 1 of Reply of Written Statement
The rent was fixed at Rs. 2,000/- and currently service charges Rs. 1,300/- are being paid in addition to the rent of Rs. 2,000/-. Even if the rent is increased in terms of the provisions of the Delhi Rent Act then the increase will be effective on Rs. 2,000/- (rent part and not on service charges). It is further relevant to mention that in the eviction petition pending before the ARC the appellant herein have not demanded any increase under the provisions of the Delhi Rent Control Act which has been sought to be invoked in the present plaint. The plaintiffs (respondents) herein are regularly receiving rent at the rate of Rs. 2,000/- + Rs. 1,300/- per month as service charges.

A. The notice which purported to increase the rent by 10% dated 14th February 1994 was received but his contention is that if the rent was only Rs. 2,000/- then, at the most, the rent could be deemed to have raised to Rs. 2,200/- and even then the Civil Court would have no jurisdiction for the matter would still not fall within the jurisdiction Rent Controller for the purpose of eviction, for the application of Rent Control Act would not be excluded as Section 3 provides that it excludes only those premises whose monthly rent exceeds Rs. 3,500/- in terms of Section 3(c) of Delhi Rent Control Act and consequently. The Appellate Court should have condoned the delay of 55 days in filing the appeal for four reasons,
1. the company was based at Calcutta;
2. the delay was explained by the Counsel by filing his own affidavit and
3. there was some confusion between 60 and 90 days for filing the appeal and
4. the Court should have allowed the parties to contest the matter on substantive grounds instead of refusing to hear on the ground of technicality of limitation.

The delay has not been properly explained and as such, the learned Appellate Court was justified in refusing to entertain this application for condensation of delay and dismissing the appeal. Learned Counsel for the respondent relies upon Banwari Lal v. U.O.I.:[1]in support of his contention that the mistake of Counsel could not be treated to be bona-fide and delay must be explained day by day.

The respondent referred to Pushpa Sen Gupta v. Susma Ghose[2] in the case judgment Karnani (supra) in para 3 Although the expression ‘rent’ has not been defined, there are indications in the present Act to suggest that the word ‘rent’ includes not only what is strictly understood as rent, but also payment in respect of amenities or services provided by the landlord under the terms of the tenancy. The Act deals with the fixation and revision of fair rent and Sec 8(3), takes into account furniture if supplied or fittings affixed in the tenement for the use of the tenant, indicating that an agreement between the landlord and the tenant in respect of the other amenities comes within the scope of the Act.

Similarly, the provisions of Section 34 refer to the maintenance of any essential supply or service including the supply of electricity, and Section 35 deals with emergency measures to be taken in respect of matters including additional services. These provisions give a clear indication that the Act contemplates that a tenancy that carries with it certain amenities to be provided or services to be maintained by the landlord is within the purview of the Act. If the Act is not so interpreted, an assured landlord may successfully circumvent the provisions of the Act by imposing on the tenant onerous conditions with reference to supply of amenities as binding terms of the tenancy.

Answer to 1st issue- The Appellate Court allowed the application C.R. No. 68/2001 citing judgment passed by SC in State of Haryana v. Chandra Mani[4] , whereby the SC condoned the delay of nearly 18 years and the desirability to allow the parties to contest on merits.

Answer to 2nd issue- Rent is not defined under DRC Act, whereby SC referred Karnani Properties Ltd v. Augustin[5] where the apex court took the view that if the word ‘rent’ not defined under the act, it must be taken to have been used in its ordinary meaning, where it indicates ‘rent’ is comprehensive enough to include all payments agreed by the tenant to be paid to his landlord for the use and occupation not only of the building and its accessories but also furnishings, electric installations and other amenities agreed between the parties to be provided by and at the cost of the landlord. In our case rent is within the purview of the Act and Rent Controller and other authorities have the same power to control.

In Radha Kishan Sao v. Gopal Modi and Ors[6], in a different context, a similar question was raised where the tenant has to pay the furniture rent in addition to rent but the tenant admittedly deposited the rent excluding the furniture rent as per direction u/d Sec 11(1)(d) u/d Bihar Buildings Lease Rent and Eviction Control Act. SC took view that since Rs. 50/- was determined by RC as fair rent any subsequent agreement for payment of rent at improved rate would not inure to the benefit of the landlord to bring the nonpayment of furniture rent within the jurisdiction of Section 11(1)(d) of the Act to entitle the landlord to a decree for eviction. The Supreme Court observed that it was the default in payment of the rent, that rent fixed by the Rent Controller, which would furnish a ground for eviction under Section 11(1)(d) of the Act. The default of the furniture rent agreed by the defendant subsequent to the lease cannot be brought within the mischief of Section 11(1)(d) to entitle the landlord to a decree for eviction. On the findings of the First Appellate Court, the furniture rent remained divorced from the rent of the building under the original demise. It was also observed by the SC that even if the furniture was returned, the lease for the building in that case would not be affected.
From the above-derived jurisprudence, the court overrules the 1st contention raised by the appellant.

Obitor dicta/ observation of the court

The Appellate Court held that the service for notice under Section 6A read with Section 8 is not being disputed, its impact is required to be seen. If the rate of rent was Rs. 3,300/- p.m. w/r. 1st April 1991, three years expired on 31st March, 1994, the rent could legally be increased w/r 1st April 1994. Since there is no dispute of the receipt of the notice, it has to be held that the rate of rent w/r 1st April 1994 was raised to Rs. 3,630/-. The learned Senior Counsel may have some justification in his submissions that this is not an admitted fact that rent stood increased by service of notice, for there was no such admission in the written statement. However, the court felt that this submission cannot be accepted for even while deciding an application under Order 12 Rule 6 on the basis of a legal proposition, if any irrefutable conclusion based on point of law is arrived at, the Court could and should decide rather must decide, the question and hair-splitting argument should not be accepted. The Court dismissed the appeal and upheld the order passed by the Trial Court allowing the application u/d Order 12 Rule 6.

It is not possible to accept the proposition that the service charges would not be included in term ‘rent’. However, the respondent was justified in submitting that in that case both the things were mentioned in the lease deed itself, while it is not so in the present case for in the lease deed only rent of Rs. 2,000/- was mentioned. Accordingly, for considering the scope of Section 50 of the DRC Act, the charges payable by the petitioner to the respondent as maintenance charges would also fall in the ambit of the expression ‘rent’. Thus, in view of the foregoing case-law, it is clear that this Court would start with the assumption that the service charges of Rs. 1,300/- p.m. also form part of the term ‘rent’ and thus the rate of rent up to 31st March 1994 was Rs. 3,300/- p.m.

Rent includes not only what is originally described as rent in an agreement between a landlord under the agreement between him and the tenant. The payment made towards the maintenance charges of the premises rented out and also for providing amenities to the tenant would also come within the expression ‘rent’ as rent doesn’t exclude all payments agreed to be paid by the tenant to his landlord for the use and occupation not only of the building but also of furnishing, electric installations, and other amenities.