There is a well known maxim known as ‘Audi Alteram Partem’. The meaning of this maxim is, ‘Hear the other party’. Unfortunately, this principle has nearly been forgotten in India. There are a lot of incidences of encounter killings by the police in the country recently. The families fear that if their beloved is taken into custody for investigation by the police, he might not be brought back alive. These officials are taking up the administration of justice in their own hands causing injustice to the accused persons. Article 11 of the Universal Declaration of Human Rights provides that, Each person being charged with any kind of penal offence is presumed innocent in the Court of law until proven guilty and the accused also has the right to use all the defences available to him. Killing a suspect without giving any of the defences available to defend him/her who might actually be an innocent having to do nothing with the charged offence is inhumane and arbitrary. 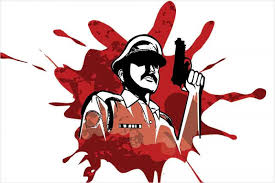 Extra-judicial killing being illegal, no one has the power to take the life of any one irrespective of the grievous or the most heinous crimes committed by him/her. However, there are certain exceptions given to this principle where a person will not be held liable for causing the death of the other person. The following are some enabling provisions which protect the people who deal with certain criminals which may also result in his/her death.

Sec. 100 of the Indian Penal Code(IPC) provides that a person can exercise his right of private defence to the extent of causing death to the other person if there is a reasonable apprehension in the mind of the person that there is a threat to his life. In this case, apprehension is enough and it is not necessary to actually get hurt to exercise his/her right of private defence. In the case of Extrajudicial execution victim families association v. Union of India (2016), it was held that the right of private defence is available only to defend oneself when there is an immediate danger to him/her. It cannot be used to retaliate nor can it be used when he/she feels that there might be a threat to life in the future.

Authority given to the police officers:

Sec.46 of Criminal Procedure Code (CrPC) provides the procedure on how the criminals should be arrested. Sec.46(2) of CrPC provides that if a person getting arrested for any crime resists or attempts to evade the arrest, the person who is authorized to arrest the person can employ such means necessary(which may also extend to causing death) to effect the arrest. Whether the means employed was necessary will depend on a reasonable man having no intention to cause any injury would have employed the same means. Sec.46(3) of CrPC provides that there is no right to cause death to any person other than a person accused for an offence punishable with death or imprisonment of life.

Culpable homicide not amounting to murder:

Exception 3 to Section 300 of the Indian Penal Code provides that a culpable homicide is not murder if a public servant while discharging his duties towards advancement of public justice exceeds the power given to him and causes the death of a person which he believes to be lawful and necessary in the present circumstance without any ill-will or bad intention towards the person whose death is so caused.

Extrajudicial killings except the exceptions provided by law are violative of the constitutional provisions. The Constitution of India guarantees some basic rights and safeguards to all its citizens and expects the State to uphold it. Of all the rights provided, Right to life is a basic and notable right provided by the Constitution. This is because if there is no life, then there can be no enjoyment of any other rights provided by law. Art. 21 reads as follows:
No person shall be deprived of his life or personal liberty except according to the procedure established by law.
In Maneka Gandhi v. Union of India, the Supreme Court laid some guidelines with respect to the procedure established by law. They are as follows:
1. There must be a valid Law
2. The Law must provide a procedure
3. The Procedure must be Just, Fair and Reasonable
4. The Law must satisfy the Requirements of Art. 14 and Art.19
Also in the case of Anita khushwaha v. Pushap sudan, it was held that access to justice is a fundamental right considered under Art. 14 and Art. 21 of the Constitution. If any person is denied of this right, he can get relief by approaching the Court through Art.32 of the Constitution.
In the case of Kartar Singh v. State of Punjab, it was held that one of the most important principle of Natural justice is Audi Alteram Partem i.e. to hear the other party. There are two facets to this principle. The first is issuing notice which is followed by hearing.
When the police authorities take up the administration of justice in their own hands, they neither follow any procedure to deprive the accused of his life nor the procedure adopted is fair and reasonable and therefore it clearly cannot be called as a procedure established by law. Thus, extrajudicial killings are unconstitutional since it violates Art.21 of the Constitution.

GUIDELINES GIVEN BY THE NHRC

National Human Rights Commission have issued guidelines relating to encounter killings to all the States and Union territories and they are required to strictly abide by it.

First Information Report (FIR) should be recorded at the earliest when information regarding any encounter deaths was informed to the police in-charge.

Receiving information regarding the encounter killing is sufficient for the police to start the investigation. The police should first analyze the facts and circumstances to identify if the informed offence was committed and if so by whom it was committed. If the accused in a police officer in the same station then the case should be transferred to an independent investigation agency.

Compensation to the aggrieved:

The compensation shall be provided to the family of the victim only after the case ends in conviction and all the police officers accused of illegal encounter killing have been found guilty and prosecuted in the Court of law. In 2010, further extension was given to the guidelines which are as follows:

An enquiry by the magistrate should be held within 3 months if a death occurs in the course of police action. The first report of the enquiry should be submitted to the NHRC in all cases of similar deaths within 48 hours. The second report regarding it should be submitted within 3 months. The report should contain the detailed information regarding the enquiry by the magistrate. The report should also be annexed with the post mortem report of the victim.

These arbitrary encounters by the Police should never be encouraged by the public no matter how horrifying the criminal was. The media should also be very careful in taking films starring police characters. It is not very wise of the media to take films showing an act of the police character taking the administration of justice in his own hands and exiling the villains as an act of heroism. After all, he has just done the same act which the criminal did! Even if the police authorities have overwhelming evidences against the accused, it is not the duty of the police to kill him just because he is a dreaded criminal. The work of the police ends with arresting the accused, providing the evidences and producing them for trial. The policemen should be charged with murder for any arbitrary killings in the name of encounters and they should also realize that gallows await them for such merciless murders.

This blog is authored by Reema

2 thoughts on “An Analysis of Extrajudicial Killings in India”