“Arbitration is a justice blended with clarity” – Nachman of Breslov.

Arbitration is a method of resolving disputes outside the courtroom without litigation basically it is a process, where dispute is submitted to an impartial 3rd party called arbitration whose decision, or who made decision which is usually binding on both the parties, or we can say that it is a process of setting/settling dispute outside the courts. It is a fine substitute for the more common judicial process. It has many definitions but with the same meaning all over.

Arbitrator is a person who is appointed to determine differences and disputes between two or more parties by their mutual consent. The arbitrator must be absolutely disinterested and impartial so as to achieve justice in a fair and reasonable manner. 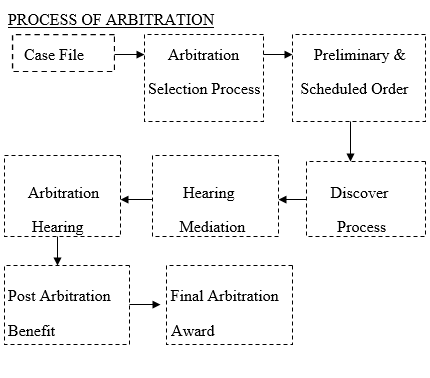 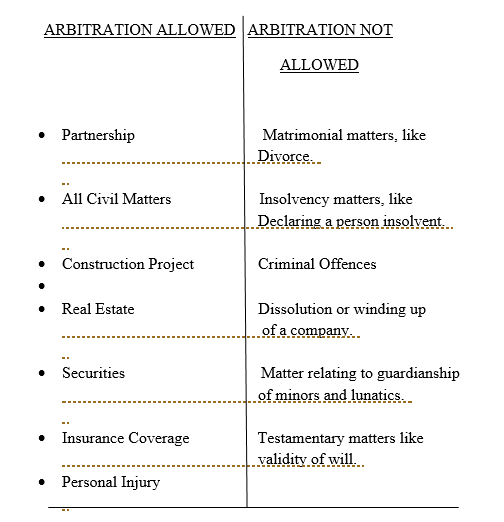 Now days if we see the conditions of the courts there are lacs of pending cases due to the rigid process followed by the courts at the time of hearing case so as to attain justice with fair and reasonable manner resulting in delayed justice which is also a huge matter of concern in the field of law.

If we talk about the criminal cases they take much more time to resolve as compared to other cases which ultimately delays the justice and as per the legal maxim “Justice delayed is justice denied” is that the justice and therefore the judgment is accessible to the person who have genuinely suffered any kind of injury and remedy available to him/her have cross the affordable time and then he/she gets the justice then that justice is not considered as a fair justice in correct manner. Justice delayed by any cause is harmful to the people of any society. So as to overcome from this problem there is an alternate remedy available to the parties of the dispute to resolve their matter by the method or help of arbitration.

PURPOSE AND AIMS OF ARBITRATION

·         Provides fair, reasonable and neutral settlement of the disputes.

·         To minimize the role of courts and reduce the number of burden from them.

·         To make provisions of for an efficient and effective procedure so as to meet the necessities and wants of specific arbitration.

·         To generally cover international and domestic arbitration and conciliation.

·         To make sure that the arbitral tribunal remnants within the limits.

·         To permit arbitral tribunal to use conciliation during an arbitral proceedings.

REASON BEHIND THE DELAY IN JUSTICE

·         Entire burden of Judicial is system is basically relied upon the courts.

And because of all these reasons there are many cases which have  not been resolved and stuck in between of following process which leads to instability among the society.

·         It maintains and preserves the relationship.

·         It further averts superfluous technicalities and at the same time assures “substantial justice within limits of the law”.

·         Informal, which means there can be more opportunity available for the abuse of powers.

·         There has been discovery limits means lack of formal discovery.

·         Inadequacy of power to provide or create legal precedent.

·         If arbitration is binding, both parties have to give up their right to appeal.

In spite of having disadvantages the arbitration has proved to be a boon in the field of law due to its overpowering advantages which makes it popular in every aspect. It is no more or no less than litigation. The arbitrator is called upon to find the facts, apply the law and grant the relief to one or other or to both the parties. It is civilized way of resolving issues and disputes among the parties by avoiding court proceedings.

In this both the parties have a choice through which they can appoint an arbitrator to the dispute. Problems are centered so no infringement of legal rights is there means only focuses on the problem and nothing else as there is any such binding procedure which has to be followed. It provides the privacy which is maintained throughout between the parties and the arbitrator. Both the parties to the dispute have the opportunity to negotiate for the settlement which is not possible in the courts. Proceedings are conducted in an informal atmosphere so that one can put his/her views in a better way. Relations are improved between the disputed parties and the arbitrator. In this emotional side of the party can also be presented.

It is vast in nature and wider in scope as compared to court proceedings because it not only deals with domestic disputes nut international disputes also with that it is not at all time consuming which is the biggest advantage out of all the advantages.

Arbitration is not a court process it is a process that is outside of the court and it is arranged by a parties to the dispute and what parties do is that parties agrees to hire a neutral decision maker which is an arbitrator. Speed is the biggest advantage in the process of arbitration so as to get your issues resolved quickly. Parties have also the huge control over the process of arbitration as it is not based on any civil procedure, parties can mutually decide the process accordingly and that’s why the process is also quite informal with respect to evidence and hearing of evidence.

It is evident that arbitration since back the years it came into force  treated as the optimal tool for resolution of disputes that salvage the court’s time and chiefly instrumental in assisting the parties to resort to quick remedial quantum. Arbitration is positioned on insightful application of law and its evolution is proof or we can say reason of its connotation in the actual proceedings. Therefore, arbitration has emerged as the most preferred platform for quick resolution of disputes especially in the industrial and the corporate.

2 thoughts on “A REGULATORY BODY IN THE FIELD OF ARBITRATION: A BOON OR BANE”