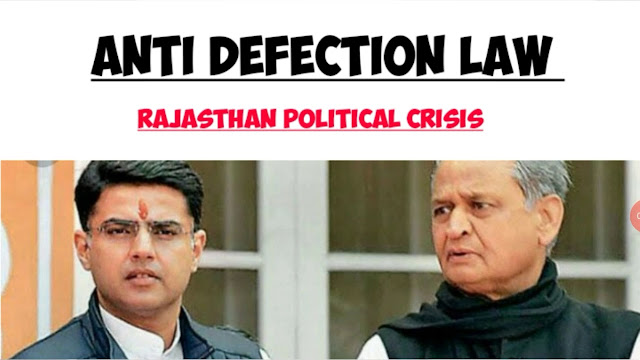 What is Anti-Defection Law?

The Tenth Schedule of the Constitution of India deals with Anti-defection Law. The anti-defection law sought to prevent political defections which may happen due to reward of office or other similar considerations[1]. The Tenth schedule was inserted in the Indian Constitution in the year 1985 by the 52nd Amendment. It postulates the process in which a member of a house, be it the Parliament or the State Legislative Assembly, may be disqualified on the grounds of defection by the speaker of the respective house. Defection in politics can be defined as an action of defecting or leaving one political party to join other the party. Provisions of the Tenth Schedule can be invoked on any legislator of both Parliament and State Legislative Assembly, if:

1. The member voluntarily, gives the membership of the Party or

2. The member does not vote or vote against the Party’s order in the concerned house.

So now that we know what the Anti-Defection Law is, the crisis can be explained in a much better way. The crisis started when around 19 MLA’s of the Congress Party started a rebellion against the C.M of Rajasthan, Ashok Gehlot. As a result, the Speaker of the Legislative Assembly sent a notice of disqualification to the 19 MLA’s. One of the MLA’s named Prithviraj Meena, on behalf of all the 19 MLA’s, moved to the High Court of Rajasthan challenging the disqualification notice.

The disqualification notice was challenged inter- alia on the ground that it is contrary to the mandate of Clause 2(1)(a) of the Tenth Schedule of the Indian Constitution. Clause 2(1)(a) which is relevant for the instant purpose, envisages that:

2. Disqualification on ground of defection.—(1) Subject to the provisions of 3 [paragraphs 4 and 5]; a member of a House belonging to any political party shall be disqualified for being a member of the House—

(a) if he has voluntarily given up his membership of such political party.

This being a ground for disqualification, it was challenged by the MLA’s that a mere disagreement or dissatisfaction against the party or its leadership can’t be a ground for invoking this clause for disqualifying them of their membership.

The petitioners also challenged the vires of the clause 2(1)(a) of the Tenth schedule as, according to them, it violates the fundamental right of speech and expression guaranteed under Article 19(1).

Interpreting the Clause 2(1)(a)

In Ravi S. Naik vs. UOI[2], the Supreme Court while interpreting the phrase ‘Voluntarily gives up his membership’ held that these words does not merely confine to ‘resignation’, but have a wider connotation or meaning. A member may voluntarily give up his membership of a political party even though he has not formally resigned from the membership of that party. Even in the absence of a formal resignation, a conclusion can be drawn by the conduct of that member that he has given up the membership of the party.

In G.Viswanathan Vs. The Hon’ble Speaker, Tamil Nadu Legislative Assembly[3] the Supreme Court held that the members of the party who publicly supported another political party or even showed disagreement and opposed their own party, were deemed to have resigned under this clause.

Can the above interpretation be violative of the fundamental right of speech and expression under Article 19(1)?

Apparently there’s a conflict between the Article 19(1) and the clause 2(1)(a) of the Tenth Schedule of the Constitution which obviously the High Court will have to iron out, may be resorting to a harmonious construction of both the provisions.

A speaker is the presiding officer of the House and has the authority to disqualify any member of the house on the grounds set out for disqualification. The Supreme Court in catena of judgements has held that the disqualification process cannot be interfered into until the final order by the Speaker is passed. As we talk about the law in question with reference to the Rajasthan Political crisis, we must know what was argued by the speaker before the High Court.

The basic emphasis was given on the fact that the court cannot intervene in the proposed disqualification proceeding which can be said to be culminated once a final order is passed by the speaker. The members were only served with the notice and were given time to file a reply and the disqualification proceeding is yet to be completed. At this stage any judicial intervention by the High Court is not appropriate and the petitions filed by the MLAs are not maintainable.

However in the said case the court laid a fetter to effect that the judicial review should not be done prior to the final decision of the Speaker.

Conclusion
This Anti-Defection law helps to avoid instability in the government by ensuring that the concerned members do not switch political parties. But it does affect the personal choice and to vote as per one’s conscience and to follow the dictum issued by the party leadership. This draws a thin line between an individual’s choice and their loyalty to the party. And as mentioned above, going against or voting against the party’s orders could result in loss of an individual’s seat in the house. All of the members may vote on one issue to maintain the stability of the government such as during the budget sessions or on any money bill and on also on no-confidence motions. But for the most of the issues one has to fall in line with their party’s whims and dictum to avoid the invocation of the Anti-Defection Law. What happened in Rajasthan is not new and for the first time and we have been witnessing this drama to unfold in other states such as Karnataka, Tamil Nadu and Andhra Pradesh also. The law was introduced to avoid “Aaya Ram Gaya Ram” sort of politics, but from what is going around, it can be easily said ‘picture abhi baki hai”.

2 thoughts on “Understanding the Anti-defection Law: In view of the Rajasthan Political Crisis”