Examination of a witness by the opposing/adverse party is called the cross-examination(C-E). C-E is the most effective of all the means for extracting truth and exposing deceit. It is a greatest legal system ever invented for discovery of truth. It is the only mode for testing the authenticity of the statements given by a witness in examination-in-chief relating to an incidence, which took place with him/er or in his/er presence. The word “cross examination” plays a predominant role in Courts. In a trial of Sessions case or Civil Case including the Motor Accidents Claims Cases, the C-E of a witness is considered as the major constituent in a trial. By virtue of the amendment to the Code of Civil Procedure, the procedure to record the evidence of a witness in chief in respect of civil cases was made easier.

C-E is generally considered to be the most difficult branch of the multifarious duties of the attorney. In trials of cases the question is not whether it is possible that the testimony may be false, but whether there is sufficient probability of its truth, that is, whether the facts are proved by competent and satisfactory evidence.

By competent evidence it is meant, that the law requires, as the fit and appropriate proof in the particular case, such as the production of writing, where its contents are subject of inquiry and by satisfactory evidence, is intended that amount of proof which ordinarily satisfies an unbiased mind beyond reasonable doubt.[i]

Allowing C-E of witness of such supporting Defendants by leading question may possibly elicit evidence which has not been elicited in examination-in-chief and which may end up filling the lacunas left in the examination-in chief. 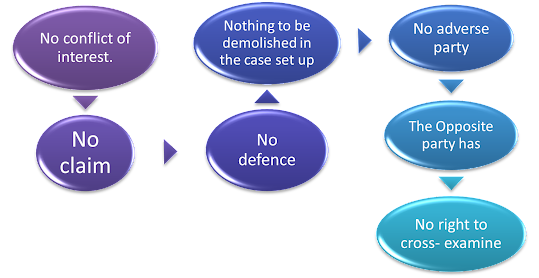 1. To develop constructive matters that has been left unsaid in direct examination;
2. To bring in all of a conversation or document, if the witness has testified to only a part out of context;
3. To exhibit that the witness are lying;
4. To establish that the witness couldn’t see or hear what he claimed;
5. To test the witness’s ability to hear, see, remember, and relate with accuracy what he testified to;
6. To institute the witness’s bias or bigotry;
7. To establish any interest, financial or otherwise, the witness may have in the results of the trial;
8. To impair the credibility of the witness, e.g., by inducing him to confess that he made statements on a prior occasion contrary to his testimony on direct examination, or by laying the groundwork for evidence of conflicting statements;
9. To impeach the witness by evidence that he has been convicted of a offense;
10. To bring to the attention of the court that the witness testifies evasively, hesitantly, belligerently, or so slowly that he seems to be struggling to support his examination-in-chief;
11. To establish that the witness has been taught and has memorized his examination; and
12. To impeach the witness in any another way permitted by law.

Under the Indian Evidence Act mentions three kinds of communications as privileged from disclosure, i.e., Matrimonial, Official and Professional communication, except under exceptions provided. An objection may be raised in case the question pertains to such communication and is not covered by exception.

a. Be brief
b. Avoid too many long questions and complex words
c. Ask only leading questions
d. Never ask a question to which you do not already know the answer[ii]
e. Listen to the answers
f. Do not quarrel with the witness
g. Don’t permit the witness to explain
h. Don’t ask the witness to repeat the testimony he/she gave in examination in chief
i. Save the explanation for summation.

It was held by the High Court of Jammu and Kashmir that- cross-examination might not be necessary if the witness testimony is prima facie unacceptable. So, if no relevant facts are answered by the witness or there is no credibility to his statements, his testimony can be rejected and there is no need for C-E in that case.

It was held that examination-in-chief must be done before the cross-examination. The opposite is neither possible nor permissible.

The Court observed that this section does not help the accused to get the statements made during the investigation, but it does help him to use such statements in case he somehow obtained them. The statement on which the witness is being contradicted must be relevant to the matter issue.

It has been pointed out that such questions relate to relevant facts and are relevant only to the issue whether the witness should or should not be believed.
In cases where the decision is solely dependent on oral evidence, it is most important to answer such questions.
Therefore, the Court can decide when a witness is compelled to answer questions and if the questions tend to criminalize him in any way, he cannot be prosecuted on the basis of his statements. He has been granted protection by the statute.
5. Sometimes a witness can turn hostile and it is necessary for the party that called a witness to cross-examine him if such a situation occurs. (S. 154)
In the case of Sat Paul v. Delhi Administration[vi], the Supreme Court has interpreted this section and defined a hostile witness as one who is not willing, to tell the truth when a party calls him.