Sex Work is one of the serious issues which assail the human social orders the world over, from the very inaugural of progress. In some cases, prostitution can be seen as a sociological wonder, an inescapable result of obliviousness and wretchedness, as a substance exchange the general public. A smaller view is that, yet similarly, legitimate concern, is that prostitution establishes a wellbeing peril, both straightforwardly in the spread of Sexually Transmitted Diseases, as well as in a roundabout way, as a conductor for drug dealing and misuse. Giving legitimate acknowledgment to prostitution would empower the sex workers to make some commitment towards the improvement of the country, as they would have legitimate insurance, their youngsters can get instruction and would be qualified for partaking in the standard of the general public. 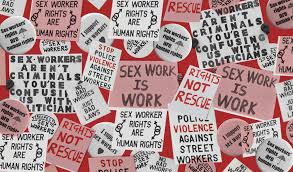 “Justice denied anywhere diminishes justice everywhere”, as was enumerated by Martin Luther King Jr, still stands much within the vicinity where the society distinguishes right and wrong based on contemporary (incidentally primitive) beliefs. There are 3 million sex workers directly working in India. As there is no legitimate law, the sex workers are misused by the pimps and the proprietors since they have no place to go. When a female is associated with such exercises, she isn’t acknowledged back in the general public or family, bringing about them proceeding with the same under the social weight. This is where the problem is incarnated in our society.

Looking in the pages of history we shall find that the veracity of respect which encompassed this profession was nothing less than that of enhanced dignity, but gradually with the alteration in the annexation of the society, the contemporary perspectives deviated and have become much that of patriarchal oriented. The essential intrigue is the lack of identity which the sex workers are facing for the last few centuries. Treating a human being who forms a part of the society is something that our Constitution doesn’t acknowledge under Article 15 and provides for equal protection of laws under Article 14. Nevertheless, the reality is subdued with the harsh conceptions which the society construes and hindrances cause them to become greater.

I. Adult entertainers; this includes males, females and transgender they have a fixed place of work which is mostly online streaming, their performance is distinguished by the emphasis on the display of specified area or specified sexual activities. These activities may include movies, songs, videos, adult-oriented images and live performances such as stripping or dancing anything including sexual activities.[1]
II. Call girls; this category is for those sex workers who are part-time commercial sex workers; they have the option to choose their clients. They are usually more educated and well-groomed. The clients they interact with are mostly from upper-class section of society.
III. Escorts; these sex workers fall on the high and costliest end of the supply chain usually recruited from colleges, fashion industries and film industries, their identities are usually kept extremely discreet. With the boom in internet services, escort services are easily available online.
IV.Gigolos; with great influence from the western countries male prostitutes have been introduced into Indian society. These male sex workers are usually well-educated men in search of easy money.
V. Massage Parlour; there a small discreet massage parlour where sex workers perform various forms of sexual activities and provide sexual massage to clients, most of these sex workers come or are trafficked from the north-eastern regions of India.
VI. Brothels; the oldest way for sex workers to work is through brothels where a pimp and a “Madam’ approve of clients and charge money on behalf of the sex workers.

Most women join this profession as a means of last resort to earn money for themselves or their families. The women joining prostitution mainly belong to the lower class of society who are neglected and not given equal opportunities as the other classes of society. Women who are raped are brought down in a society and are seen as social outcasts and this result in social negligence and lack of employment opportunities, therefore, they accept taking prostitution up as they are psychologically destroyed and see no option to meet ends. The social stigma of rape affects women and is not even accepted at home.[2]

Abduction or trafficking is the most common cause of entering prostitution, these are done unwillingly by the girls or women as they are taken from their native places with the false hope of better employment opportunities and abductors take advantage of the innocence of these young girls. Prostitution seems to affect women widely, they are objectified and after paying the prostitute men think they can do what they please to do with women and are not afraid of the consequences, they merely see women as an object they paid for to fulfil their sexual desires. In prostitution women are affected psychologically and physically, they are abused daily and the lack of norms to protect them increases these opportunities to harm women.

In India consent is an unimportant word especially among the male gender of the society when almost daily a woman is raped and no one pays heed to it, the condition of sex workers who get paid for in exchange of sex are far off in the worst condition, in most cases society sees rape as the fault of the woman in case of sex workers the mind-set that it is their profession there are no complaints registered if client rape or sexually harasses a prostitute.

Violence against sex workers is extremely eminent because they are viewed as criminals rather than citizens, this stigma has led to the systematic violation of human rights of the sex workers such as the right to life, dignity, equality, and equal protection and due process under the law. A significant case enshrine the right to life of a prostitute under Article 21 of the Constitution in Bhudhadev Kamskar vs State of West Bengal[3]; it was stated that sex workers have a right to life under Article 21, no one has the right to murder or assault them. This judgment also directed the Central and State Government to set up rehabilitation homes for sex workers and impart technical and vocational skills like sewing to help them to attain livelihood after seeing the plight of sex workers. The Immoral Trafficking Act following the directions incorporated section 21, as a rule, to develop rehabilitation centres by the State Government after attaining a license from them.[4]

The myths surrounding violence, rape and sexual assault against sex workers have ensured that access to justice is reduced, if that was not enough the law enforcement system is extremely repressive that they harass, sexually assault or illegally detain the sex workers in custody if they go to file any complaints. Even after the voicing opinions and emerging evidence provided by the government and non-government institutions, the State has failed to provide protection and prevent infringement of the right of the sex workers who are arbitrarily evicted and arrested. In some cases, doctors ask for sexual favours or sexually harass sex workers before they are provided with medical treatment.

RESPONSE BY SOCIETY TOWARDS SEX WORKERS

The word patriarchy sounds very fancy but its lubricants are vandalizing the social recognition of the people termed as ‘Sex Workers’. Indeed, this term is used to specify a distinctive class of persons who endeavour the society against the prejudices of the term aforementioned as ‘Patriarchy’. Scrolling through the history of our country it did not strike us for once that sexual entertainment or persons associated with it were catalogued in a different sector. This approach of disrespect to fellow human beings existing in the same society denies the rights of laws from various perspectives including the degradation of the morality imbibed by the Constitution.[5]

On a circumstantial perspective, sexual violence is a very common consequence of the curriculum of Sex workers, which goes unattended at the maximum situation with no efforts of redress. Eventually, it is considered that a Sex Worker cannot be raped because she already has agreed to sex with various people which abrogates her right to consent. Approach to justice for women is obliged by social boundaries going from an absence of information on their privileges, reliance for help and assets and the danger of approval; and absence of limits in the equity frameworks to react to the specific needs of women. For the situation of sex labourers in India, disgrace and good focal point connected to sex work further emphasize obstructions to getting to equity. Their dubious status in law bring about decisions that frequently mark sex-labourers as lawbreakers and recurrent wrongdoers.[6]

FALLACY IN PRESENT LAWS TO PROTECT THE RIGHTS OF SEX WORKERS

Fundamental law concerning the sex workers’ status in India is The Immoral Traffic Act was passed in 1956. Indian laws in any case don’t regard sex consequently of money as prostitution. As indicated by laws, clients can be caught if they appreciate any sexual demonstration visible to everyone. Other than another significant issue with the approval of the Immoral Traffic Act is that recuperation homes set-up under the Act is, all in all, a mistake.

The homes are debilitated equipped to deal with the number of women who are condemned under the Immoral Traffic Act, 1956. Moreover, ladies in homes live in sub-human conditions with genuine constraints on their chance. The disappointment of this preparation and the nonappearance of any follow – up administrations when joined with alienation these women face, even from their families, make it a little miracle that these women leave the administration homes just to re-visitation of prostitution. Women likewise regularly experience physical and sexual maltreatment in these homes.

Now and again, authorities responsible for these homes constrain the women into prostitution themselves as an end-result of favours for cash. State of Maharashtra v. Madhukar Narayan Mardikar,[7] here, Apex Court stated that women are a part of the fundamental rights construed in our Constitution and are equitably entitled to the desire of consent. A woman has the right to be amicably protected by the laws on account of any violence caused to obliterate her modesty. The approach with its indication as Immoral Traffic Act, 1956 has neglected to accomplish the ideal outcomes.

The act of prostitution requires an extreme change in the general public. In India, every forty young ladies under the age of fifteen are constrained into prostitution. It is truly imperative to comprehend the sex workers as people supplied with rights in an important design, and not simply as an explanatory cause.

Indeed, however, India is a signatory to the United Nations Convention, there is no arrangement which precludes the offense of human trafficking. For example, the fundamental motivation behind trafficking women furthermore, little youngsters are prostitution. Correspondingly, due to joblessness in India, numerous youngsters apply for occupations in outside nations in any event, for low compensations where their international IDs are seized and they can’t return to their local nations.