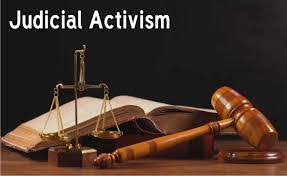 Role of Judicial activism under Article 21 helps it to interpret and making it scope wider which helps its citizens to rights for dignified life. In Article 21, the judiciary expand the scope of personal liberty from physical to mental liberty which includes right to privacy. Article 21 interprets by judiciary. In many cases, judiciary had interpreted Article 21 and expanded its scope. In my article, we will discuss what the meaning of Article 21 within the Constitution is. Now, the judiciary expanded its scope too much which we do not need to expand this much. Because of Judicial activism position of Article 21 also decreases and loses its importance.

MEANING OF ARTICLE 21 UNDER INDIAN CONSTITUTION

Article 21 of the Indian Constitution states that “No person shall be deprived of his life or personal liberty except according to procedure established by law[i].” Article 21 is available for citizens and non-citizens but not for juristic or artificial person. Nature of Article 21 has two trends i.e. past trend and future trend. In past trend, it was considered as negative right because it prohibiting the state from doing anything against the life and liberty. The language of Article 21 starts but in present trend Supreme Court with its activism and judicial creativity has converted Article 21 from a negative to positive right because it directing the state to take all the necessary steps to guarantee a quality, meaning and dignified life. Article 21 is not an absolute right it has also restrictions. In past trend, the meaning of personal liberty is limited to physical liberty and life means mere existence. The concept of procedure established by law also plays important and main role under Article 21. The concept has been picked from constitution of Japan. In past trend, it means only requirement is whether the procedure has been laid down under an act that has been passed by the Parliament. In present trend, in case of Maneka Gandhi v. Union of India[ii], the court held that any procedure that takes away the life or liberty of a person must be just, fair and reasonable.

Judiciary plays an important role to interpret the Article 21. It extends the scope of personal liberty and life. In case of Justice Puttaswammy (Retd) v. Union of India[iii], it was held that right to privacy is an integral part of liberty, freedom, dignity and again held it is a fundamental right and sexual orientation was held to be important facet of right to Privacy. Through judicial activism the meaning of life expanded as it is a quality, meaningful and dignified life not mere animal existence. Implied rights are also born out from this as Justice PN Bhagwati declared that the correct way of interpreting part-3 of Constitution, it is not merely and attempt to explain the meaning of right under this part and every effort must be made to expand the scope of Fundamental Right to include all other rights that have the same character as Fundamental Right. The concept of right to dignified life under Article 21 has given birth to prisoner rights in India through following cases mentioned below:-

Judicial Activism also interconnects the Article 14, 19 and 21. In the case of Maneka Gandhi v. Union of India[iv], the court held that the Doctrine of Exclusiveness of fundamental rights rejected. According to this, every fundamental right is independent of each other and must read in its own sphere. The court held that Article 14, 19 and 21 are intimately connected and one must stand the test of other. Article 14, 19 and 21 were held to for the Golden Triangle of Part-3. Judicial activism has also defined the meaning of procedure established by law. The court held that a procedure which takes away life and liberty of a person must stand the test of justice, fairness and reasonableness. It cannot be an arbitrary procedure. Justice Krishna Iyyer impliedly imported. The American Doctrine of due process of law in Article 21 and now protected not only form executive action but also from legislative action. There was also one question arises that whether right to life include right to die or not? In case of, State ofMaharashtra v. Shri Maruty Dubl,[v] it was held that right to life include right to die. A person cannot be compelled to live life to this determinant and Section 309 of Indian Penal Code was held to be unconstitutional. After that, in case of, Gyan Kaur v. State of Punjab[vi], the court held that right to life does not include right to die and Section 309 of Indian Penal Code was held to be constitutional.

POSITION OF ARTICLE 21 IN INDIA NOW

We discuss about what is Article 21, its meaning within the constitution but its position in India is not valuable anymore. Article 21 has implied rights which included in two words i.e. dignified life and Personal liberty, but these rights should be implied or interpreted in Article 21? Implied rights like prisoner’s rights also included in Article 21 which does not needed to interpret or imply in this article. In many cases judges interprets Article 21 where we does not need because of implied rights Article 21 loses importance in law. In past trend word “personal liberty” includes physical or bodily liberty and this was held in AK Gopallan v. State of Madras[vii], but in present trend it was extended to mental liberty which includes right to privacy. Right to privacy extends to telephone tapping and restrict the interest of right to health of another person. These implied rights can be separated from Article 21 or can be inserted under sub-point of other articles which are related to them. Prisoner’s rights can also be a fundamental right but it has to be separate right. The telephone tapping right cannot be included under mental liberty. These implied rights have no value under Article 21 like right to clean environment, right against bonded labour etc. A person always filed case under Article 21 for any matter relating to life and liberty which becomes burden. For prisoners there should be different laws like right to solitary confinement, right to torcher, right to handcuffing and right to compensation etc. because of the judicial activism, Article 21 interpreted too much which we do not need.

Now, we all know about the position of Article 21 in India. We have to change the position or status of Article 21 otherwise it will vanish or loses its importance completely. Article 21 has widest meaning within the constitution itself but too much expansion make it junk or salvage for Indian Constitution. Different rights can be elucidated in form of heading or sub-heading of other articles. Judicial activism interprets Articles 21 but make it burden. All the issues related to life and personal liberty cannot be elucidated under this. Article 21 is an adorable fundamental right that provide us a dignified life and personal liberty. It is also difficult to find implied rights under Article 21 because they are implied and not mentioned in Indian constitution. But we cannot deny that Judicial Activism has given such wide meaning to Article 21 and now it becomes the source of human rights in India.

[i] THE CONSTITUION OF INDIA, BARE ACT

This blog is authored by Nishu Singh