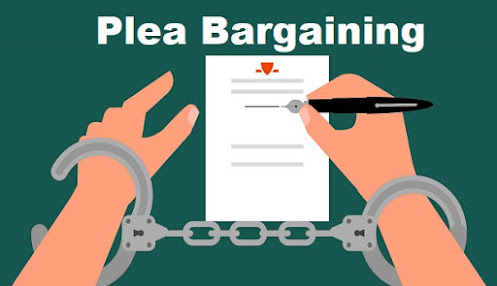 Plea bargaining or negotiated plea is a pre-trial negotiation between the defendant and prosecution in which the defendant agrees to plead guilty in exchange for some kind of concession. Usually, the concession is in form of a lesser punishment than which is specified by law or for dropping few charges in case of multiple charges or for recommending to the judge a specific sentence that is agreed by the defendant. This concept of plea bargaining was introduced in our Indian Criminal Justice System (ICJS) in the Criminal Law (Amendment) Act, 2005 under the recommendation of the 154th Law Commission. Sections 265 A to 265 L of the Code of Criminal Procedure (CrPC) provides a mechanism through which a criminal case can be settled without going for a trial.

The concept of Plea bargaining is not available to all criminal offences in India. It does not apply to heinous offences like murder or rape where the punishment is life imprisonment or the death sentence. Under our Indian legal system, the following offences come under the ambit of Plea Bargaining:
Offences for which punishment is less than seven years
Offences which do not affect the socio-economic condition of the country
Offences which are not against women or against a child below 14 years of age

However, the option of going for plea bargaining is not available to Juveniles or if the accused has been previously convicted for the same offence.

Thus, if A is accused of theft and voluntarily causing grievous hurt, he may agree to plead guilty if he is prosecuted only for theft.

TO TRIAL OR TO PLEA?

The most frequent question that arises in the minds of people regarding the concept of plea bargaining is – whether it is better to go to trial or to get a plea bargain. There is no definitive answer to this question as it differs from case to case. Under some circumstances, it is better to take a plea while in others it is more beneficial to go to trial. The decision of going to trial or getting a plea depends solely on the accused who has much more to consider than whether he is actually innocent or not.

However, even if the answer differs for every case, there are some ways in which the accused can come to a decision. Firstly, talking to a criminal lawyer will give great insight into the matter. Even if the accused will have a rough idea of the criminal process with familiarity from the news or the internet, a criminal lawyer would have much more experience from dealing with many such cases. The lawyer would be able to brief the accused on the current criminal process, possible sentences or concessions, etc. The lawyer will also be able to analyze the pieces of evidence in the current case and determine the possibility of a guilty verdict.

The next important thing is to consider if the plea will actually be in the best interests of the accused and if the plea is actually a bargain for the benefit of the accused. These can be determined by analyzing the pros and cons of going to trial and getting a plea.

PROS AND CONS OF TAKING A PLEA BARGAIN:

First, we will discuss the pros and cons of taking a plea. Taking a plea bargain will resolve the case quickly. This will help in avoiding publicity and unwanted attention. Especially, since our country is infamous for dragging cases for around seven to ten years or even more, settling the cases quickly is a better option. Quick settling of cases will help save your time and money. Plea bargaining allows a person to plead guilty even without a lawyer. So taking a plea can save a lot of money which must be spent on a lawyer if you proceed to trial. Further, plea bargaining helps the accused get a lighter sentence than which is prescribed by law and also get concessions. Since the negotiation with the prosecutor is done before the trial, there is no uncertainty of the proceedings. Also, once the plea is approved by the judge, there can be no appeal to higher courts by the opposition. Thus, the person can be certain that the case is closed.

Like every coin has two sides, plea bargaining also has some disadvantages. In India, one cannot enter into a plea bargain without admitting guilt. Admission of guilt creates a criminal record and the person has to deal with the moral repercussions of conviction in the society. This includes the difficulty of getting job opportunities even after some years. Even innocent persons who take a plea in order to avoid a lengthy trial will have to continue their life with a criminal record. Further, even after taking a plea, a person cannot escape punishment. A plea bargain only allows some concessions or a lesser punishment. So the accused will have to serve minimum punishment or pay some amount of fine even in some of the most successful plea bargains. Another disadvantage of taking a plea is that a judge can reject the plea and impose a longer sentence if the judge is convinced that the plea is unfair. And once the judge rejects a plea, it is very difficult to prove that the accused is innocent.

When an accused enters into a plea bargain, he loses many of his rights:
Right to trial: The accused loses his right to be heard by a judge and to have a trial, which is implicit under Art 21 of the Constitution of India, as he voluntarily admits to being guilty of the crime.
Right to testify: By taking a plea, the accused loses his right to tell his version of the events that took place and get exonerated in case of his innocence.
Right to appeal: Once a plea is approved by the court, he loses the remedy of further appeals.

PROS AND CONS OF GOING TO TRIAL:

Going to trial has several advantages. Going to trial will give the defendants more time to prepare a better defense which aids in proving that the accused is innocent. In a trial, an accused is always innocent until he/she is proven guilty. The burden of proof is upon the prosecutor to find pieces of evidence against the accused and prove the case beyond a reasonable doubt. The accused also has the option of going to appeal if he does not take a plea. Even if the trial is a lengthy process, going to trial and getting acquittal is the only way for an innocent to have justice. It is also the only way for a person to escape criminal responsibility and criminal records. Further, some plea bargains offer very little incentive to the accused. It mainly helps the prosecutor get the accused convicted and the victim to have better compensation.

Many members of the Tablighi Jamaat belonging to different countries have obtained releases from various court cases by taking a plea bargain. Accused of violating visa conditions to attend a religious congregation in Delhi, many have closed their cases by admitting guilty to minor charges and paying fine. Thus, plea bargaining helps people to avoid time-consuming trials. However, in order to prove the innocence of the accused, going to trial is the better option. Even if the saying “Justice delayed is justice denied” is true, it is also true that an innocent person should not be found guilty. It is solely the right of the accused to choose whether to go to trial or to take a plea bargain. The decision should be taken considering the best interests of the accused.

8 thoughts on “PARADOX OF PLEA BARGAINING: TO TRIAL OR TO PLEA?”