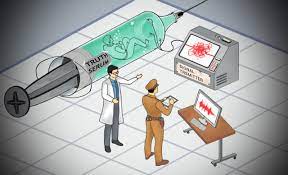 Recently, the Kerala High Court refused to admit an accused’s appeal in the case of Louis v. the State of Kerala, where he willingly submitted to a narcoanalysis test to show his innocence in the matter. The court reasoned that disclosures made during narcoanalysis while under the influence of a specific drug cannot be considered a conscious act or statement made by a person, and that the prospect of the accused making exculpatory comments to help his defence cannot be ruled out. Hence, the court found the petitioner’s argument that these materials gathered via narcoanalysis tests might be utilized as corroborative evidence in order to bolster his remarks not legally sound. Even if the petitioner freely submits himself to a narcoanalysis test, the court said that it believes that there is no assurance that the statements would be voluntary. As a result, even if the court allows the petitioner to do a narcoanalysis test, it will be invalid in the eyes of the law.

For criminal investigations, narcoanalysis has been shown to be a useful and helpful tool that has a significant impact on both the innocent and the guilty, speeding up the process of justice. Courts throughout the nation have always signaled, via their decisions, that although this criterion should not be used in all circumstances, it may be applied in cases when the general welfare of society is at stake. Naturally, the first question that comes to mind for anybody is why, if this approach can play such an important role in advancing the cause of justice, the court did not allow a person to voluntarily submit to this test in order to show his innocence in this particular case? In the criminal justice system, what function do narcoanalysis and other deception detection tests play when it comes to interrogating the accused and extracting information and the truth about the crime committed by the subject? To grasp the reasons behind this, we must first understand what a narcoanalysis test is, its legal status in India, its admissibility in Indian courts, and the numerous laws of constitutional and evidentiary law pertaining to it.

NARCOANALYSIS TEST AND ITS LEGAL POSITION IN INDIA

The term “narcoanalysis” comes from the Greek word “narke,” which translates to “anesthesia” in English. It’s a psychotherapy approach that involves the use of psychotropic medicines to cause a significant reduction in sensitivity. The correct investigation, questioning of witnesses, and collection of evidence by the investigating officials are essential for a fair trial and conviction in criminal cases. Collecting evidence and information at the crime scene, as well as interrogating witnesses, is less taxing and time-consuming for investigators than extracting concealed information. Various deception detection tests, such as polygraphs, brain mapping, and the Narcoanalysis test, are used to obtain this concealed information from individuals.

Narcoanalysis tests often lack legal validity since they induce an unconscious condition in which mental elements with strong related effects emerge, where they may be exploited by the investigating agency, and the subject expresses whatever is on their mind, and so they are not acceptable in court. However, the Supreme Court has never categorically disallowed the use of this test in criminal investigations, and the Indian judiciary has generally agreed to its restricted and conditional use for the purpose of obtaining the truth. Thus, scientific procedures like narcoanalysis tests may be used in difficult criminal cases for the benefit of society as a whole to achieve a crime-free society, track down criminals, cross-check case results, and evaluate whether the suspect made a genuine statement or not. In general, narcoanalysis tests lack legal legitimacy since they are done by a semi-conscious subject and thus cannot be used in court. The court may, however, limit entry after analysing the circumstances surrounding the test. It’s vital to remember that administering narco-analysis or lie detector tests without the accused’s will would be a breach of Article 20 (3) of the Indian Constitution, which regulates criminal investigation and prosecution in India.

ADMISSIBILITY OF NARCOANALYSIS IN THE COURT

While narco-analysis might give a plethora of information, it can also cause a slew of issues, with some critics questioning the use of serum on witnesses to extract the truth. As a tool or assistance, narcoanalysis is used to collect and support evidence. However, it has been questioned if this was judicial testimonial compulsion and a violation of human rights and personal freedom. Legal experts differ on whether the outcome of narco-analysis tests is admissible as evidence in a court of law. While a narcoanalysis test result has some credibility, it is not absolutely admissible as evidence in the court, which evaluates the circumstances surrounding its acquisition when determining its admissibility. Such tests may be used to get admissible evidence or be used to corroborate other evidence. Nevertheless, if the findings of this test aren’t acknowledged in court, they can’t be used to substantiate any other evidence obtained through a routine investigation.

NARCOANALYSIS TEST ACCORDING TO PROVISIONS OF LAWS

A person cannot be forced to testify against himself, per Article 20(3) of the Indian Constitution. The clause established the presumption that the accused is innocent until proven guilty and that the prosecution must prove the accused’s guilt, and also that the accused is not forced into making any comments against his will. If the test is administered against the accused’s will, it will be in violation of Article 20(3) of the Constitution; but, if the test is administered voluntarily and with the accused’s agreement, it will not be in violation of Article 20(3). The current criminal justice system is built on the well-known court maxim that “let a hundred bad people go free rather than a single innocent person go free.” Hence, it is skewed in favour of the accused and preoccupied with individual liberty, allowing evidence to be readily diluted. The prospective evidence is divided into two parts: admission and confession. The fundamental problem is that the evidence gathered during the test was in violation of Sections 25 and 26 of the Indian Evidence Act of 1872. However, if the test is completed in front of a magistrate, it will be considered a legitimate confession and will not be in violation of Sections 25 and 26. In general, the permissions necessary for the administration of a narcoanalysis test are as follows: first, the magistrate’s authorization to conduct the test. Second, the subject’s fitness must be determined by a general physician who must provide a certificate of good health to the subject, and third, the subject’s consent must be secured to meet the requirements of Article 20. (3).

It’s also worth noting that the narcoanalysis test first appeared in India in 1936 and was used for the first time in the Godhra case in 2002. Since then, the acceptability and constitutionality of the narcoanalysis test have been the subject of various court decisions and judgments. Important examples include Selvi v. State of Karnataka, State of Gujarat v. Anirudh Singh, Nandini Satpathy v. P. L. Dami, Rojo George v. Deputy Superintendent of Police etc. As a result, the constitutional legitimacy of this test is in the hands of the courts, and there is a balance between societal and individual interests.

Law is a dynamic process that develops in response to societal changes, scientific and technological advancements, ethical considerations, and so on. The criminal justice system in India has an extremely low conviction rate, which has to be addressed with a focus on current science and contemporary technology. Science breakthroughs and innovations should be included in the legal system as long as they are beneficial to society and do not infringe basic legal concepts. For criminal investigations, narco-analysis has been shown to be a successful and helpful technology that has a significant impact on both the innocent and the guilty, speeding up the process of justice. This approach should not be utilised in all situations, but only when the interests of society as a whole are at stake. It’s also vital to stress the need for more nuanced and comprehensive questioning approaches. The criminal procedural laws, evidence, and institutional infrastructure that were developed over a century ago are now determined to be insufficient to fulfil the needs of the scientific world. The way today’s criminals employ science and technology to carry out their illicit activities has prompted a reconsideration of the criminal justice system’s basics to enlist the support of scientific breakthroughs to assist investigations and, ultimately, the courts in delivering justice.

This blog is authored by Arnav Laroia, student of National Law University, Jodhpur.