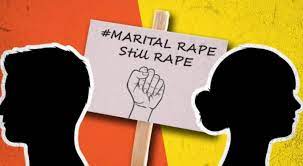 Marriage in India is a sacrosanct relationship under the personal laws which not only marks a beginning of an intimate and fiduciary relationship between the husband and wife but also gives birth to a deep-rooted connection between two families and a bond that is believed to last till eternity. According to the Hindu customs, in order to marry, the couple complete seven rounds around a holy fire, each round signifying a vow of supporting, maintaining and keeping each other safe from all adverse challenges life offers them and entering into a bond that will last for their next – seven lives.

However, in the present times incidents like Marital Rape and harassment of the female partner by the male counterpart have arisen which have led to creation of a bone of contention in the penal laws of the country and creating a dilemma in the conscience of the judiciary in order to determine the penal nature of the above phenomena.

According to Section 375 of the Indian Penal Code, the offense of Rape refers to a sexual intercourse with a woman against her will and without her consent which leads to violating the chastity of the victim. Marital rape, thus refers to a rape committed by a husband on her wife which leads to creation of a non – consensual sexual relation between them. Section 375 of the Indian Penal Code has thus defined an offense of rape but has placed an exception for a sexual relationship between a married couple and stated that a sexual intercourse by a man with his own wife against her consent or without her will is not an offense given that the wife is above 15 – years of age. Thus, the offense of rape is limited to one committed by a stranger or any one other than the husband of the victim.

There have been various contradicting views of the judiciary upon the socially unacceptable but legally overlooked evil of marital rape. In the matter of Independent Thought V. Union of India in 2017, the Hon’ble Supreme Court declared that an act of forced sexual intercourse by a man on his wife was outside the ambit of rape and refused to delve into the exception of Section 375 of the I.P.C. Moreover, in another landmark case of NimeshbhaiBharatbhai Desai V. State of Gujarat, the Hon’ble High Court of Gujarat, while dealing with the question of marital rape observed that one of the origins of the concept of a marital exemption from rape laws is the idea that a woman gives an irrevocable consent for her husband to have sexual intercourse with her any time she demands, thus giving a green flag to activities like marital rape.

However, there have been numerous observations and rulings of various courts that have objected to the adversity committed by a man on his wife just for satisfying his bodily needs without caring for the woman’s will or consent. According to the report by Justice J.S Verma’s committee to criminalize marital rape, the position of a rapist remains the same and he is not absolved from his crime just due to the fact of him being married to the victim. The mere fact that a married woman is unable to have a locus standi in matters pertaining to her personal and sexual life and her ability to give consent is a violation of right to equality as enshrined under Article 14 of the Constitution. Moreover, the exception 2 of Section 375 of the IPC which decriminalizes marital rape is also a discriminatory provision which discriminates between a single and a married woman, leading to creation of a water – tight compartment which not only absolves the right of a married woman on herself, her chastity and consent but also gives a green flag to the husband to come at an undue position of power on her.

The grievous nature of a highly heinous crime like rape has been established in the case of State of Punjab V. Gurmit Singh where the courts observed that “a murderer destroys only the physical body of the victim while a rapist degrades both the soul and body of the helpless female victim”. No one even has the right to violate the chastity of a woman, be it her husband or a stranger. The right to life as a fundamental right guaranteed to each and every citizen under Article 21 also stands on a slippery ground when the activities like marital rape enjoy an unfair immunity under the penal laws of the country, especially when a right that a person has on himself is given to another person without even asking for their volition or consent. This provision has not only compromised the most certain right to dignity for a woman but also has deeply cut the right to life of such females. Many a times, it may not be physically possible for a woman to indulge in sexual activity due to a number of physical and emotional reasons but this provision compels the woman to even enter into sexual activity on the whims and desires of the husband.

The recent proceedings in the Delhi High Court on the constitutionality of the exception two of Section 375 granting immunity to the husband for marital rape has been taken into question by the Hon’ble bench which has rightly observed in its wisdom that it is impossible that the same act of rape violates the dignity of an unmarried woman but not of a married woman. The married woman too should be empowered to carry with her the right to say “no” which even a sex – worker has been guaranteed under various provisions of the law. The provision of marital rape has been criminalized in more than 50 foreign jurisdictions with the British Courts rightly observing that “modern day relationships are a partnership of equals, not one where one party is a subservient chattel of the other.” The United States has even held that the independence and individuality of the partners in relationship is of utmost importance.

The main premise underlying the ground of marital rape revolves around the fact that the guilt of a man gets abolished as soon as he commits the same offense of rape on his wife after he gets married, which in a logical and rational deduction is faulty and erroneous in itself. As rightly observed by the Justice Verma Committee, “an offense of rape cannot merely be washed away legislatively”, the provision of law seriously needs to be considered in light of justice and ensuring that the noble virtues of equity, equality and good conscience do not get carried away by the legislature.

The ground of mental and physical cruelty also encompasses in itself the provision of marital rape as a ground for divorce but does not criminalize it. This merely leaves an option for the aggrieved party to file for a divorce and separate from the husband as recognized by judicial precedents. This serves no good to an aggrieved party who would have to file for a divorce and fight a long – stretched legal battle to prove the same.

In a country like India, where nearly half of the population is comprised of females, it would be an erroneous and gravely unjust provision to not criminalize marital rape and give an unfair immunity to the husbands to treat their wife as a chattel or possession. On one hand, the women – centric welfare legislations are trying hard to bridge the gap between justice and women rights in order to meet the needs of 21st century females and give them an equal and fair right in both their homes and public places, while on the other hand such draconian and outdated provisions of law lead to degradation of a woman in their own household. The phrase “charity begins at home” thus stands violated and shattered when a woman is not even safe in the four walls of her home.

It is therefore the need of the hour to recognize the right of a woman to refuse sexual intercourse in a marriage at any time and raise her status to an equal partner in this sacrosanct relationship. The judiciary needs to take up a clear stand and set a precedent penalizing the offenders who indulge in such immoral and socially unacceptable practices. Moreover, it is also the need of the hour to criminalize the heinous act of marital rape and impose punishments upon the offenders along with instructing the legislature to withdraw such provisions and make the much-needed amendments in the law.

The views expressed above are completely personal and do not correspond to any political or social affiliation. The author is a law student residing in Delhi.