Despite the fact the India has nearly 7.5% of its population living with some form or the other of any mental disorders, a general discourse on this issue is considered a taboo. Usually, in common parlance, mental illness is juxtaposed to lunacy, insanity or any other form of mental disorder. In a broader sense, metal illness may be referred to any variety of mental strains which a normal person may undergo during his normal course of lifestyle – depression, anxiety , stress, anger, loneliness. According to WHO, ” 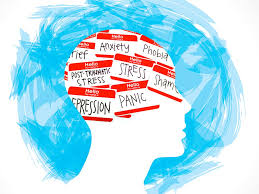 Mental disorders comprise a broad range of problems, with different symptoms. However, they are generally characterized by some combination of abnormal thoughts, emotions, behaviour and relationships with others. Examples are schizophrenia, depression, intellectual disabilities and disorders due to drug abuse. Most of these disorders can be successfully treated.”[1] . Various mental disorders have varying impacts and effect depending on the physical, psychological and social conditions of persons of different age groups.
With clinical depression being the most prevalent mental disability found among human beings , it is the most well-concealed phenomena in a country like India, where it’s still uncommon to speak about mental health. Depression may be characterized by themes of lack of self-esteem , feeling of worthlessness , whimsical thoughts , failure or uncertainty about future in a person’s life. Someone may have pangs of depression or may be struggling with it for a long time , but this illness grows stronger and more potent in environments conducive to negativity , nihilism and dullness.
This topic is most apt in the present scenario wherein we are locked inside in our homes like a bird due to the ongoing pandemic. Often in our solitude, we feel such thoughts take control of our psyche as disconnection with outer world , uncertainty of job or education , constraint on movement etc. With India having a very large population of poverty-stricken , famished and underprovided citizens, mental illness is an even compounded hazard faced by them like the rest

Mental Illness – A Commonplace But Overlooked Issue in India

Not a month had passed since the nation was shocked when Bollywood Actor Sushant Singh Rajput committed suicide, another popular actor from the Kannada film industry Susheel Gwoda took the extreme step. It is only in the backdrop of these events only that the society gets a rude awakening from it’s ignorance of these potentially ominous issues. It is highly common that people suffering from any sort mental illness do not themselves know this fact of their mental state , seeking medical or therapeutic assistance seems a thing of trivial importance to them. People fear that discussing mental health is a socially stigmatized and uncommon thing, hence they rarely seek help from their family or friends or anyone. Besides, the government response to help citizens battle mental disorders and other psychological ailments has been lukewarm largely. Going statistically, there are less than 1 psychiatrists a psychologists for every 1,00,000 of the Indian population. The National Mental Health Policy of the Ministry of Health and Family Welfare is the premiere body tasked with overseeing and allocating resources related to improving mental health and providing welfare facilities. Established in 2014, the Policy lays emphasis on providing affordable mental healthcare facilities to the mentally challenged by the development of healthcare infrastructure. The Mental Healthcare Act, 2017 aims to provide reasonable healthcare and rehabilitation facilities to persons who faced suicidal tendencies or subsequent attempts, sensitize police, medical and other authorities with respect to the treatment of such people and endeavour for the setting up of separate mental healthcare institutions and hospitals for
treatment of people suffering from mental disorders. The National Mental Healthcare Programme, since it’s inception in 1982, has been a luminary movement in the direction of providing affordable and accessible mental healthcare facilities to the patients of mental disorders. Also, under this policy, the government made concentrated efforts for the diffusion and dissemination of knowledge , expertise and skills in the field of mental healthcare and well-being. One of the earliest findings in the research of mental health was made by the Bhore committee in 1946, which stressed on the need for extension of the Indian Healthcare programme in the sub-area of Mental health, owing to the lack of treatment and correctional facilities present at that time. The NMHP, re-strategized in 2003 sought reforms in the mental healthcare framework by modernizing medical institutions and incorporating mental health technology to improve healthcare facilities. The reforms were reinstated on district levels under the District Mental Health Programme (DMHP) in 1996 with a view to stimulate community participation , mobilizing NGOs, support groups and other small-scale awareness and care agencies to sensitize and inform the society about such outreach programmes. With such welfare programmes , the government has tried to alleviate the incidences of mental health deterioration and injuries , harm and deaths caused due to such disorders.

It strikes at the heart of the citizens when the state fails to disseminate basic services on a widespread level. Mental Healthcare is one of those grey areas which require rectification and state funding for the continuation and enhancement of it’s welfare programmes. The total allocated budget for India’s mental healthcare programme was pegged at Rs. 50 crore, out of a substantial 5,000 cr[2]. Reserved for general healthcare , that too was heavily underutilized. The total estimated loss to the Indian economy due to mental-illness crisis is estimated at rs. 1,000 crore by the WHO in the previous decade. With lack of adequate and well-equipped treatment facilities, insufficient number of mental healthcare personnel , poor infrastructure dedicated to therapeutic and non-medicinal mental-disorder correction leads to a high-incidence of mental disorders among people. S. 45 of the Mental Health Services Act,2017 provides for setting up of State Mental Health Authority in a manner expedient to aiding mental-health related crisis in the conferning states. In addition to that s.29(2) of the act mandates that the government shall design and implement appropriate programmes and measures for promoting mental healthiness and preventing suicides , however, lack of proper implementation, attentention, leadership and sufficient funding are the main causes of it’s dormancy. Apart from the direct causes , the indirect causes of poor mental-health in the Indian paradigm are higher stress ,anxiety and depression levels caused due to overflowing poverty , malnutrition and diseases , low standards of living , work-load and other responsibilities , feeling of bi-polarity, loneliness , PTSD and other negative thoughts.

With the efforts of the government, no matter how intensive, are usually inept in bringing all major welfare programmes in the periphery of realization, it falls to the private stakeholders of the society to take affirmative action to deal with the encounter at hand. With a marginal number of healthcare professionals accessible to an overwhelmingly huge proportion of populace, individual effort at the cellular level is the need of the hour. As stated in the recommendations of the Shrivastava Report in 1975[3] , a fervent Community Health Volunteer (CHV) scheme was needed to tackle the growing number of mental illness cases , with profusely provided pro-bono services from paraprofessional and semi-professional health workers from the community itself. These Community Health programmes were largely targeted to cover rural and semi-urban areas which were facing an acute shortage of proper healthcare facilities per se. Apart from indigenous works, India can take clues from the design of the American Government in regulating a national suicide prevention hotline, stylized as 1-800-273- TALK (8255), made to providing an intensive-care and counsellor services over a phone to anyone going through suicidal or depressive thoughts. Such a crisis helpline has been widely been popularized in Films , TV dramas , songs etc as was depicted in the 2010 hindi film Jootha hi Sahi. In India, several voluntary groups and NGOs, such as AASRA, Sneha India etc. who pledge Samaritan services to people in need.

Lastly , the it is needless to say that the state- funded effort would not be impactful if there is no individual and community role in it’s implementation , and when taking such a sensitive and incoherent matter as mental health into consideration, a holistic and non-conventional approach towards mitigation is a must . Recently, the Himachal Pradesh High Court ordered the state government to set up a suicide prevention helpline in the suicide prevention, to help reduce the growing number of suicides incidences during the pandemic.