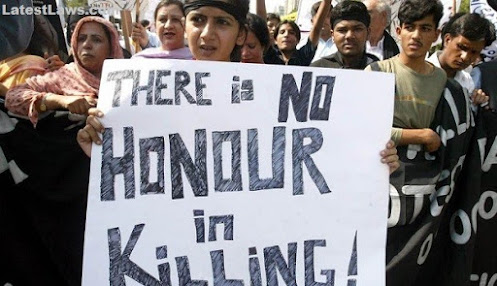 Indian society is a multicultural and pluralistic society where a lot of beliefs and faith regulate the human life and one belief which Indian people consider very precious is “Honour”. In a patriarchal society, women are considered as the bearer of honour of the family. If any women attempt to proclaim their rights is considered a violation of these cultural norms of the community. And these counter activities taken by the family in the name of honour is known as Honour Killing.

•        The traditional practice of killing of a relative, especially a girl or a woman, who is perceived to have brought dishonour on the family.[1]

§  A woman can be targeted by her family for a variety of reasons including, refusing to enter into an arranged marriage, being the victim of a sexual assault, seeking a divorce even from an abusive husband or committing adultery. The mere perception that a woman has acted in a manner to bring “dishonour” to the family is sufficient to trigger an attack.[2]

Ø  The practises of honour killing has its origin in ancient times that exists in all religions. Centuries ago in desert tribes, customs regarded women and their morality as the honour of the family.

Ø  Honour killings have been known since ancient Roman times, when the pater familias, or senior male within a household, retained the right to kill an unmarried but sexually active daughter or an adulterous wife.[3]

Ø  Today only its view is widened, acts such as marital infidelity, flirting, premarital sex, seeking a divorce, being raped, becoming pregnant can affect a family’s honour. As honour killing remains culturally influenced it remains exceptions to standard notions of justice.

Ø  Even in this 21st  century, honour killings are  prevalent especially in South India, Maharashtra and Gujarat.

Ø   Though there was no nationwide data on the prevalent of honour killings in India, they quoted figures compiled by the India Democratic Women’s Association, according to which Haryana, Punjab and UP account for about 900 honour killings and another 100 to 300 in the rest of the country.[4]

Ø  Pakistani activists estimate that there are about 1,000 “Honour” killings every year.

Ø  In June, the murder of 19-year-old Mahwish Arshad in Faisalabad district, Punjab, for refusing a marriage proposal gained national attention. According to media reports, at least 66 women were murderedin Faisalabad district in the first six months of 2018, the majority in the name of “Honour.”[6]

Honour-based violence in the UK:

Ø  Up to 12 honour killings happen every year usually within South Asian and Middle Eastern families.

Ø  One of the most well-known cases is that of Banaz Mahmod, from Surrey, whose murder in 2006 was organised by her father and uncle. She had left an unhappy arranged marriage after which she started a relationship with another man. The 20-year-old was strangled and hidden in a suitcase which was then buried underneath a Birmingham property.

Ø  Metropolitan Police said 211 incidents had been reported in London – 129 of which were criminal offences – between April and October.

Ø  Detective Chief Inspector Gerry Campbell of the Metropolitan Police told The Guardian,  that 25% of their cases involved people under the age of 18.[7]

Ø  Recently, in the Kaushalya’s case (June 2020), Kaushalya & her husband Shankar got married and eloped due to unacceptable caste differences. “Honour” killing has been carried out by the family of a Caste Hindu girl for marrying a Dalit man. The victims Shankar, and his wife of 10 months, Kausalya, were in a pool of blood. While Shankar died on the spot, Ms Kausalya survived. Udumalpet killing would become the first case from Tamil Nadu to make it to the National Crime Records Bureau’s crime listed as an ‘honour’ killing that year.[8]

•        In December 2017, a Tiruppur sessions Court handed down a landmark judgement that came down on the blight of murder in the name of honour by sentencing the main accused Chinnasamy, father of Ms Kausalya, along with five others to death. Two others were given double life terms and a five-year the term, respectively. Ms Kausalya’s mother Annalakshmi and three others were acquitted.

•         However, on June 22, the Madras High Court overturned the sessions court verdict and acquitted Chinnasamy and two others. The death sentences of the hired killers were commuted to 25 years in jail. The High Court had faulted the Prosecution for failing to prove a conspiracy.[9]

Ø  In fact, only less than 5% of honour crimes went to the Court because of the so-called justice made by Khap Panchayats.

▪         In 2014, a 20-year-old girl in Kolkata, West Bengal, was gang-raped by 13 men on orders of Khap Panchayats as punishment for having a relationship with a man from a different community.

▪         In 2007, for the first time in the case of Manoj-Babli, the court awardedlife imprisonment to the head of a Khap Panchayat for killing the newlyweds.[10]

▪          In August 7, 2020, a 16-year-old girl was allegedly murdered by her family in Badsikari Kalan village of Kaithal district. The police have arrested the deceased’s mother Rani (55), brother Parvesh (20) and her cousin, who confessed to the killing.[11]

Ø  In August 2019, Rajasthan Assembly moved Rajasthan Prohibition of Interference with the Freedom of Matrimonial Alliances in the Name of Honour & Tradition Bill mandating the death penalty against the criminals of ‘Honour killings’.[12]

Ø  It will be useful if such precedent is enacted as a law in the Centre.

v  In 2012, the Law Commission of Indiabrought its own version of the Bill in its 242nd report. The Bill entitled “Prohibition of Unlawful Assembly (Interference with the Freedom of Matrimonial Alliances) Bill, 2011” dealt primarily with the “Unlawful Assemblies” called Khap panchayats.[13]

v  In March 2018, the Supreme Court gave preventive measures to combat honour crimes in India. The guidelines are to be followed until a proper law is legislated. (Shakti Vahini v. Union of India).

v  Some of the effective measures can be  taken to prevent honour crimes are,

1.      Implementing and establishing a strict law.

4.      Protecting women from these heinous crimes.

5.      Disciplinary action should be taken against Khap Panchayats.

v  Indian Constitution has been the base for all laws in India.

v Article 14 (Right to Equality) is violated as honour killings mostly focus on women than men leading to gender-based violence. [14]

§  Rights provided by the Constitution:

§   “Any adult girl or adult man has the right to marry anyone of their choice. No panchayat, no society, no parent can question this,” said a bench headed by Chief Justice of India Dipak Mishra. ( Article 21 Right To Life and Personal Liberty).[16]

§  Under Section 3 of the Indian Majority Act, 1857,  a person who is major, is allowed to have inter-caste marriage or inter-community marriage which is not prohibited by any laws.

§  The families need to understand that there is no Honour in killing one’s own child. These honour crimes show that more than half of the Indians lead lives within the strong crutches of the caste system. Even today People blindly committing these crimes shows that India has really not modernized.

§  Therefore, Honour killing is a grave sin and people practising it should be given harsh punishment.